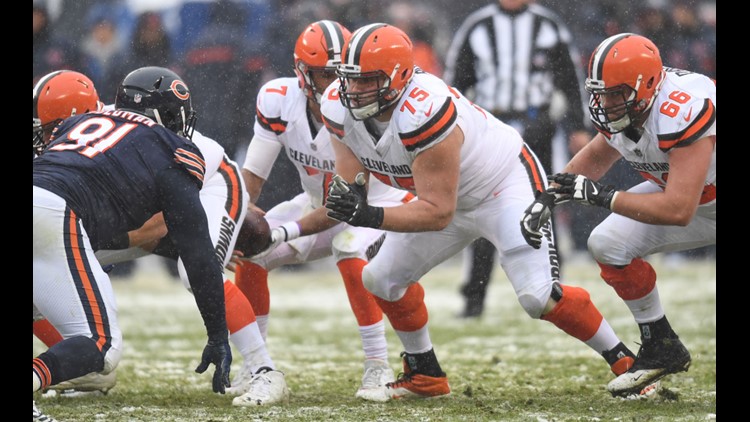 BEREA, Ohio -- Cleveland Browns offensive line coach Bob Wylie is not a fan of the idea moving Pro Bowl-caliber left guard Joel Bitonio one spot over to play left tackle as a replacement to 10-time NFL All-Star Joe Thomas, who retired in the offseason.

While the move has been mentioned in questions to Coach Hue Jackson and Bitonio himself, Wylie wants to keep that option as the “last resort.”

The reason Bitonio is “Option Z” for Wylie is not talent-related.

Rather, Wylie likes the interior combination of Bitonio, center JC Tretter and right guard Kevin Zeitler and believes that trio can help the new left tackle, as well as right tackle Chris Hubbard, who is in his first year with the Browns after starting his career with the Pittsburgh Steelers.

“Whoever it is, like I said earlier, whoever that guy is, we’ll make a decision and we’ll work with that guy,” Wylie said. “Then, if we need to do something to help it with formations, protections, the backs, all that stuff, we’ll do that. We want to try to keep the four together as long as we can.”

Currently, the Browns have two contenders for the left tackle spot, Greg Robinson, the No. 2 overall pick of the St. Louis Rams in the 2014 NFL Draft, and Desmond Harrison dealing with injuries. Robinson suffered a concussion on the first day of practice and Harrison reported with a foot issue.

Those injuries have forced rookie blocker Austin Corbett to move over to tackle from left guard to compete against Shon Coleman, who has been working on the transition from right tackle since the start of spring workouts back in April.

“The state of the left tackle…that’s the State of the Union,” Wylie said. “Shon’s fighting, and he’s doing well at the spot.

“We keep working with Desmond every day with the mental part of the game. You see him, in back of the huddle, taking reps. You see one of the coaches like (offensive quality control coach) Brian (Braswell) stays with him and goes over the assignments with him to make sure he’s on page, so we’re waiting for him to get back on the field.”

Regardless of how the left tackle situation shakes out, Wylie feels the offensive line could be a special group of players by season’s end.

“They have that talent. It's just they’ve got to get it done. They've got to do it. The room is a good room to be in. The character in the room is good.”