'We're not used to this!': 'The Bone Lady' revels in Cleveland Browns' playoff ride

'This is a new era, and it feels great!' 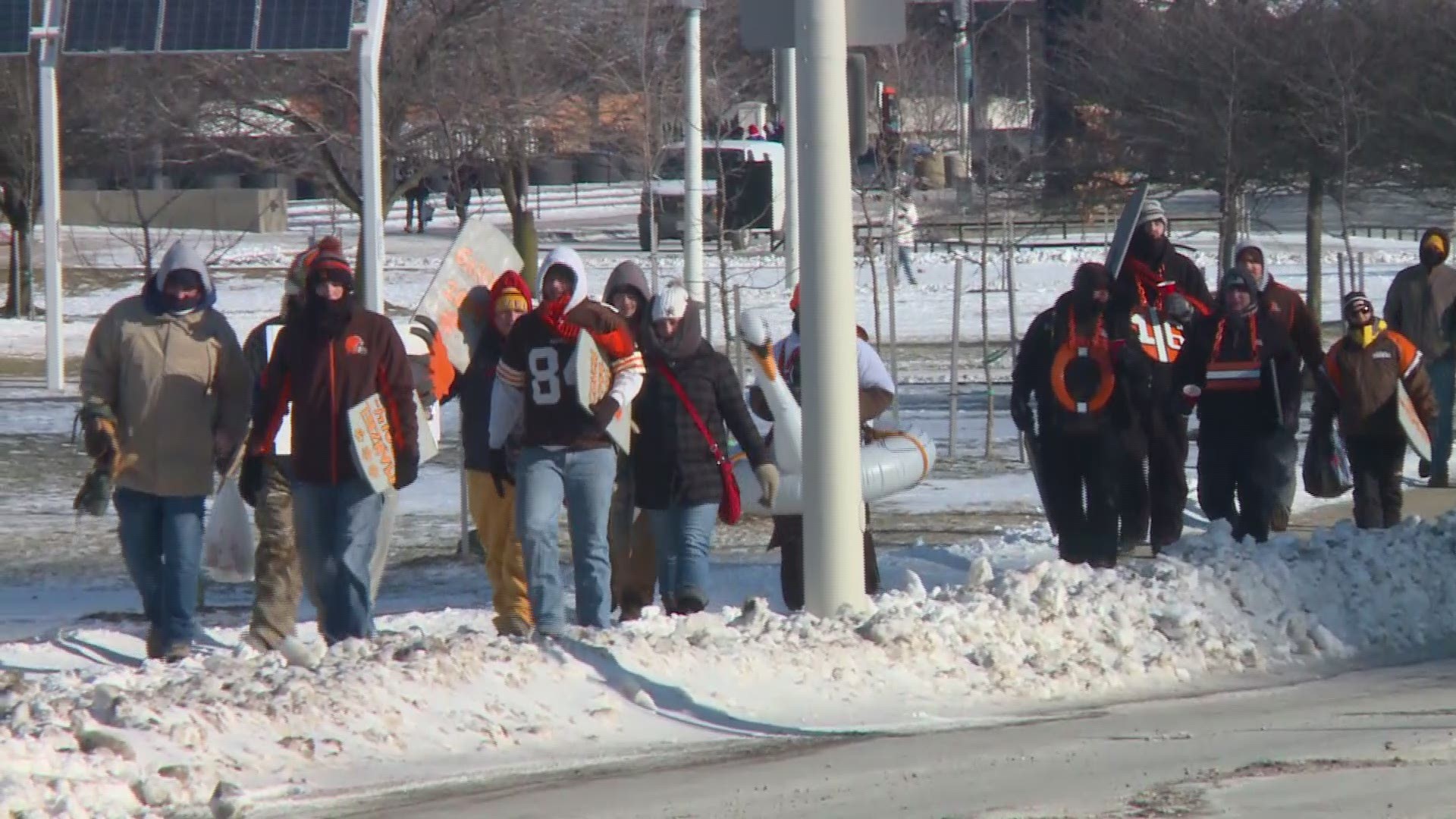 CLEVELAND — There are millions of great Browns fans, not just in Cleveland, but all across the world.

However, you'd be hard-pressed to fine many more recognizable than Debra Darnall, aka "The Bone Lady."

"It's just the wildest ride I've ever been on," she says of her status as an NFL "superfan." "But no one ever told me I was going to be on the ride!"

That ride began in 1999, when the Browns returned to the league after a three-year hiatus following Art Modell's move to Baltimore. Living in Columbus at the time, the Summit County native Darnall had boycotted pro football during that period, but was overjoyed when her beloved team came back.

After painting her Volvo orange to look like a Browns helmet (complete with an 8-foot bone on top), she planned to drive it in a local parade, but felt she needed to go a step further. Thus, "The Bone Lady" was born.

"I always say 'Bone Lady is what happens when you drink too much beer and you own a glue gun,'" she joked.

The rest, as they say, is history, and she was soon being recognized all around the country. Unfortunately, the Browns were among the worst teams in the NFL during much of the next two decades, and the ever-devoted Debra (always honest) saw her patience with the organization wearing thin.

"We went through a lot of different regimes of people saying they were going to fix this losing culture, but they never did it," she lamented, while also admitting she had briefly "semi-retired" from being The Bone Lady and even stopped going to games in part due to her frustrations with the team (although she never stopped watching). "They just lied. I used to laugh at the press conferences... Everybody's giving you corporate speak. I hate that.'"

But finally, things are different. The Browns appear to have a strong foundation and a solid roster, and are suddenly a bona fide championship contender. Darnall herself senses "a shift in the energy" with this group, and is ecstatic about the current results.

"We kept living in the past...almost like there was a cloud over our heads and we couldn't break out of it," she said. "This team came in--these young guys, the coach--they came in and said, 'No, we don't buy that. We're gonna win!

"They're just being who they are, they're doing their thing, and I want to say thank you to them... This is a new era, and it feels great!"

The culmination of that new era came last Sunday night in Pittsburgh, when the Browns took down the hated Steelers in a dominating 48-37 Wild Card win. For The Bone Lady, whose head gear prominently features a "Steelers Suck!" button, it was a shocking and emotional occasion.

"The fact that there weren't any of those annoying Steeler fans in the stands made watching that game so much more enjoyable," she laughed. "I've never seen a Browns first quarter like that [28-0 lead]...My mouth just dropped open, like, 'Wait a minute? We're not used to this!'"

Darnall has been honored by the Pro Football Hall of Fame for her fandom, and also recognizes her role as a prominent female fan in a sport where that can still elicit eye rolls (she credits fellow superfan John "Big Dawg" Thompson with being so welcoming to her years ago). To her, though, the eccentric appearance and personality is about more than just rooting for a team; it's about her motto of "BE WHO YOU ARE!"

"Our culture...wants you to fit in the box and do all the right things, and you didn't come here to the earth to do that," she said. "There's no one on the earth like you. You are one unique soul. Everybody has these gifts, and you have to find a way to tap into that and let them out.

It's a lesson she believes the city of Cleveland can learn, too.

"We've always had this self-esteem problem," she said. "I think, through this long stretch and journey, we've realized Cleveland is great. It's the people that make this city great."

Oh, by the way, she's predicting a Browns win over the Kansas City Chiefs this Sunday. It will be a tall task, but she's never been one to be dishonest about what she believes.

"There's something about attitude and grit and heart... That will always outshine you," she said, adding that it will help having players like Joel Bitonio and Denzel Ward back. "Enjoy it! Just have fun and enjoy the ride, because having fun is the best energy out of all the energy."