The Browns had asked the state to allow 16,000 fans at home games for the remainder of this season. 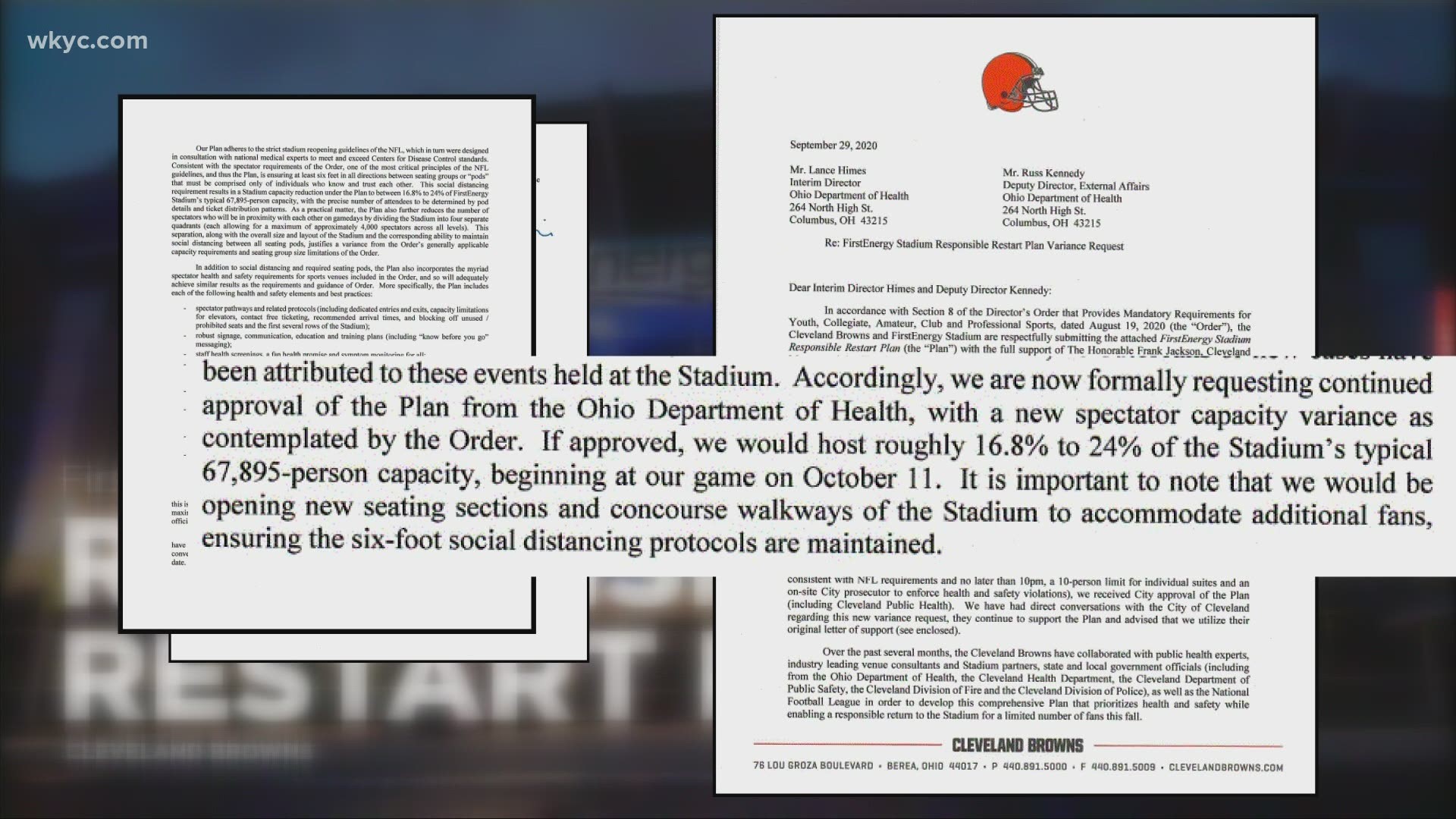 CLEVELAND — With its big win in Dallas yesterday, there’s little doubt the Browns, with a 3-1 start, could fill FirstEnergy Stadium with fans this weekend when the team hosts the Indianapolis Colts.

But a pandemic has added a cruel twist, severely limiting the number of fans inside a stadium built to hold more than 67,000.

During each of the Browns’ first two home games, the Ohio Department of Health only allowed the team to host 6,000 inside FirstEnergy Stadium, despite the team’s detailed plan for keeping fans separate.

On Monday afternoon, 3News received the text of a letter sent from Interim Ohio Department of Health Director Lance Himes to the Browns approving a variance that will allow for 12,000 fans at FirstEnergy Stadium for the remainder of this season. The letter was directed to Browns Chief Operating Officer David Jenkins.

I have reviewed the Cleveland Browns’ new request dated September 29 for a variance regarding the maximum number of spectators allowed in outdoor sports venues under my “Director’s Order that Provides Mandatory Requirements for Youth, Collegiate, Amateur, Club and Professional Sports” signed on August 19.

I concur with the Cleveland Department of Public Health in approving this variance request for additional spectators at the Browns’ remaining home games in FirstEnergy Stadium. This approval is based upon these key expectations:

Earlier on Monday, 3News learned the Browns were hoping to get more fans inside the stadium this weekend.

In the team’s latest request to the Ohio Department of Health Department, owners Dee and Jimmy Haslam, want up to 16,000 fans, or 24 percent of capacity, at Sunday’s game and beyond.

The letter, dated September 29th, says no cases of Covid have been traced to the first two home games, and says the team’s early plan for managing more fans remains in place.

The owners wrote, “It is important to note that we would be opening new seating sections and concourse walkways to accommodate additional fans, ensuring the six-foot social distancing protocols are maintained.”

You can read the letter below.

The Browns’ front office could not be reached to discuss the team’s latest request.

Last month, Jenkins explained the importance of bringing fans to the stadium to 3News.

“We are excited to be hosting fans, even in limited numbers," he said. "It’s such a critical element to creating a game-day experience and creating a home field advantage."

About the 6,000-fan cap, he said, “It’s okay to say we were disappointed and not quite what we were hoping that we were looking for. Hopefully that continues to evolve, and we achieve higher capacity beyond the first two games.”

88 Counties in 88 Days: Cleveland Browns are back in action in Cuyahoga County