"They can pour beer on us because we’re just athletes, right?" corner Logan Ryan tweeted. 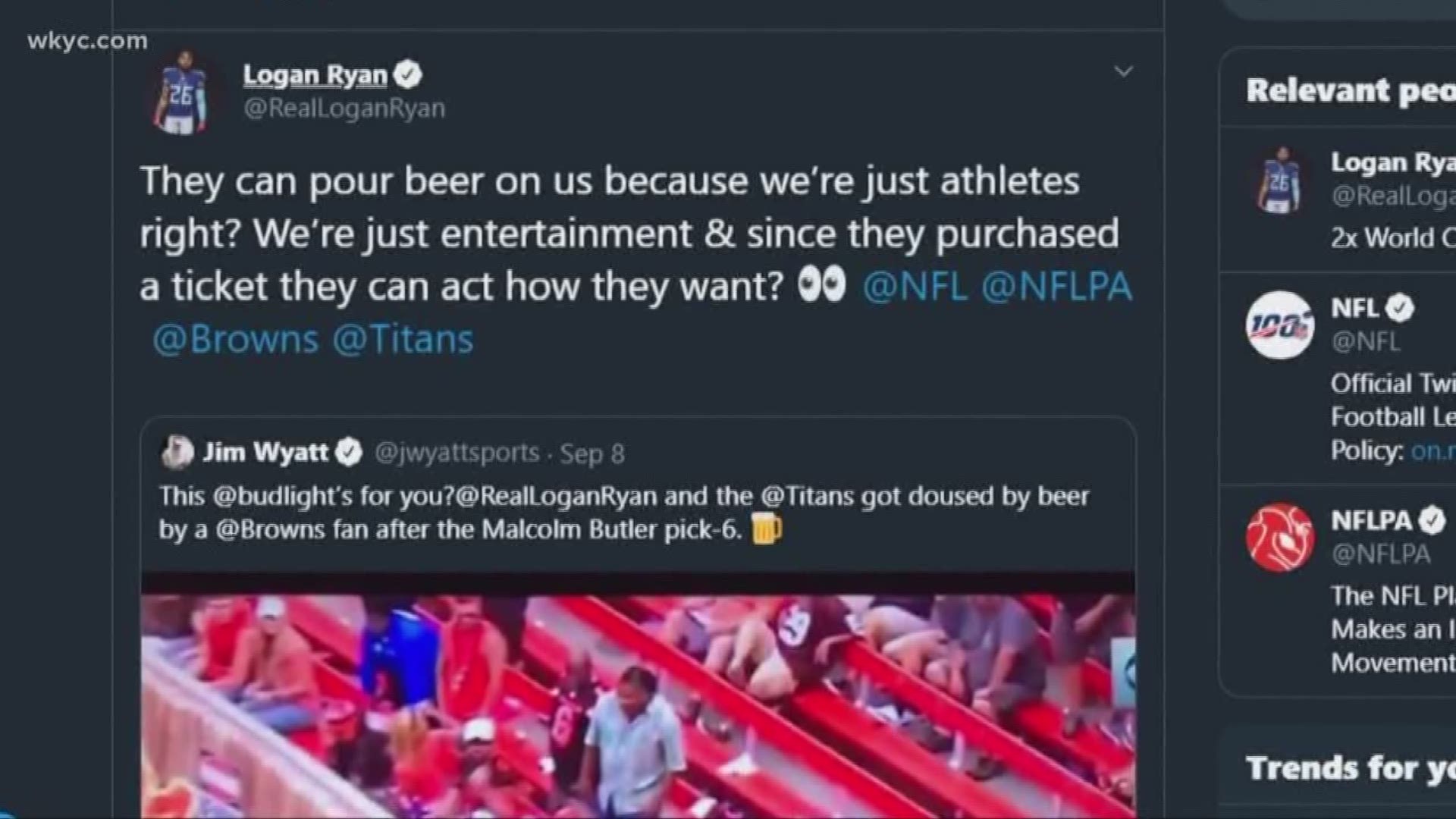 CLEVELAND — The bad news continues to get worse for the Cleveland Browns after their humiliating 43-13 loss to the Tennessee Titans at FirstEnergy Stadium in Cleveland last Sunday.

Following Malcolm Butler’s interception return for a touchdown late in the fourth quarter, Titans players jumped on top of the wall in the Dawg Pound to celebrate with Tennessee fans when a Browns supporter wearing a Baker Mayfield jersey took exception to the moment.

As cornerback Logan Ryan let go of the wall and landed back on the track around the field, the Browns fan tossed beer in his face.

“They can pour beer on us because we’re just athletes, right?” Ryan tweeted Monday. “We’re just entertainment and since they purchased a ticket, they can act how they want?”

The NFL Players Association responded with a comment saying, “Thanks for flagging this with us, Logan. We’ve gone ahead and contacted league security to address the matter. Please send us a DM if you have any further questions/comments.”

On Tuesday, the Browns announced they have indefinitely banned the unnamed man from FirstEnergy Stadium, saying "This individual person's action is not tolerated in our building and it is not reflective of our fan base or city." The decision has brought a decidedly mixed reaction from fans, and many have noted that prior, more serious actions in the Dawg Pound have been let slide.

The fan’s behavior at the end of the game was much like that of the Browns during the game.

The Browns committed 18 penalties for 182 lost yards and lost their starting left tackle, Greg Robinson, after he kicked Titans defensive back Kenny Vaccaro in the head, in the first half and had an inability to keep upright their quarterback, Baker Mayfield.

The Browns not only committed 18 penalties, but six were personal fouls that cost the team 15 yards each time. Another four penalties were offensive holding violations, and then, receiver Odell Beckham Jr. had a 22-yard gain taken off the board for an offensive pass interference call.

“A lot of it was losing composure at times,” Browns coach Freddie Kitchens said Monday. “[Bad] technique causes you to be in bad positions to commit penalties.

“We need to continue to work on our technique in the back end of things on defense and upfront. It is about maintaining your composure and being the smarter football team. We understand that problem, and we will work on fixing that problem.

Despite the video evidence to the contrary, Kitchens felt the majority of Browns fans represented well Sunday.

“The atmosphere was incredible for that game, for an opening game, a day game and all those sort of things, really have never been in that type of atmosphere before,” Kitchens said.

AFTER FURTHER REVIEW: Jim Donovan says, 'Too many times for Cleveland Browns, 0-1 becomes 0-3'