The latest dispute came during a hearing held July 18 as the child's mother continued to pursue Gordon for child support for their 3-year-old daughter. 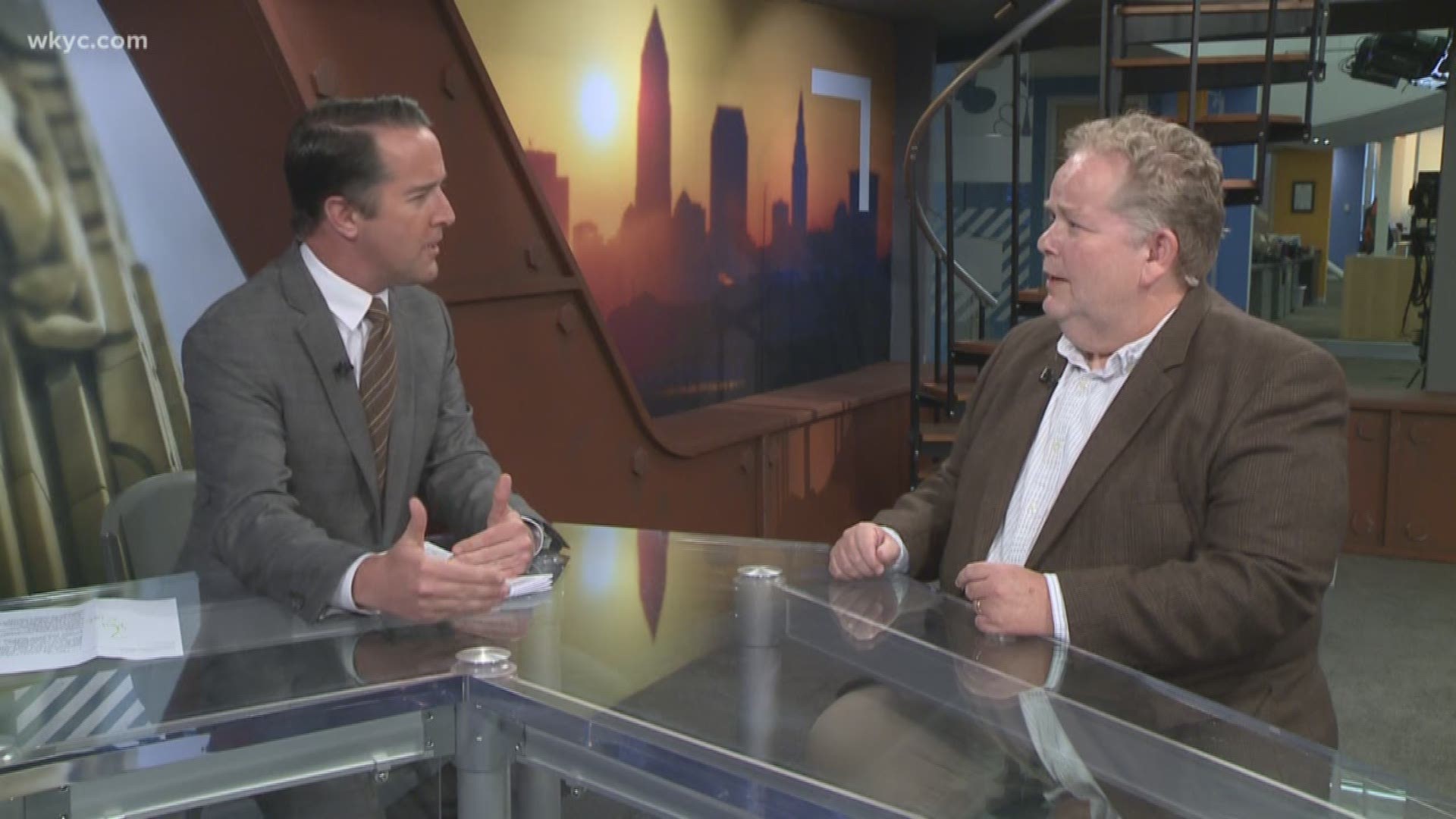 CLEVELAND -- Browns receiver Josh Gordon was in the midst of a heated and protracted child custody dispute in the days leading up to his abrupt departure from the team, court records obtained by WKYC.com show.

Those same court records allege an attorney representing the child’s mother threatened “to air sensitive information to the public in an effort to embarrass [Gordon],” who has been embroiled in the support dispute since 2015.

Court records also show Gordon earned so little money during his NFL suspension that he did not file income tax returns in 2015 and 2016.

However, court records show he expects to resume collecting his $800,000 salary and return to the Browns for their first game on Sept. 9.

The latest dispute came during a hearing held July 18 as the child’s mother continued to pursue Gordon for child support for their 3-year-old daughter. 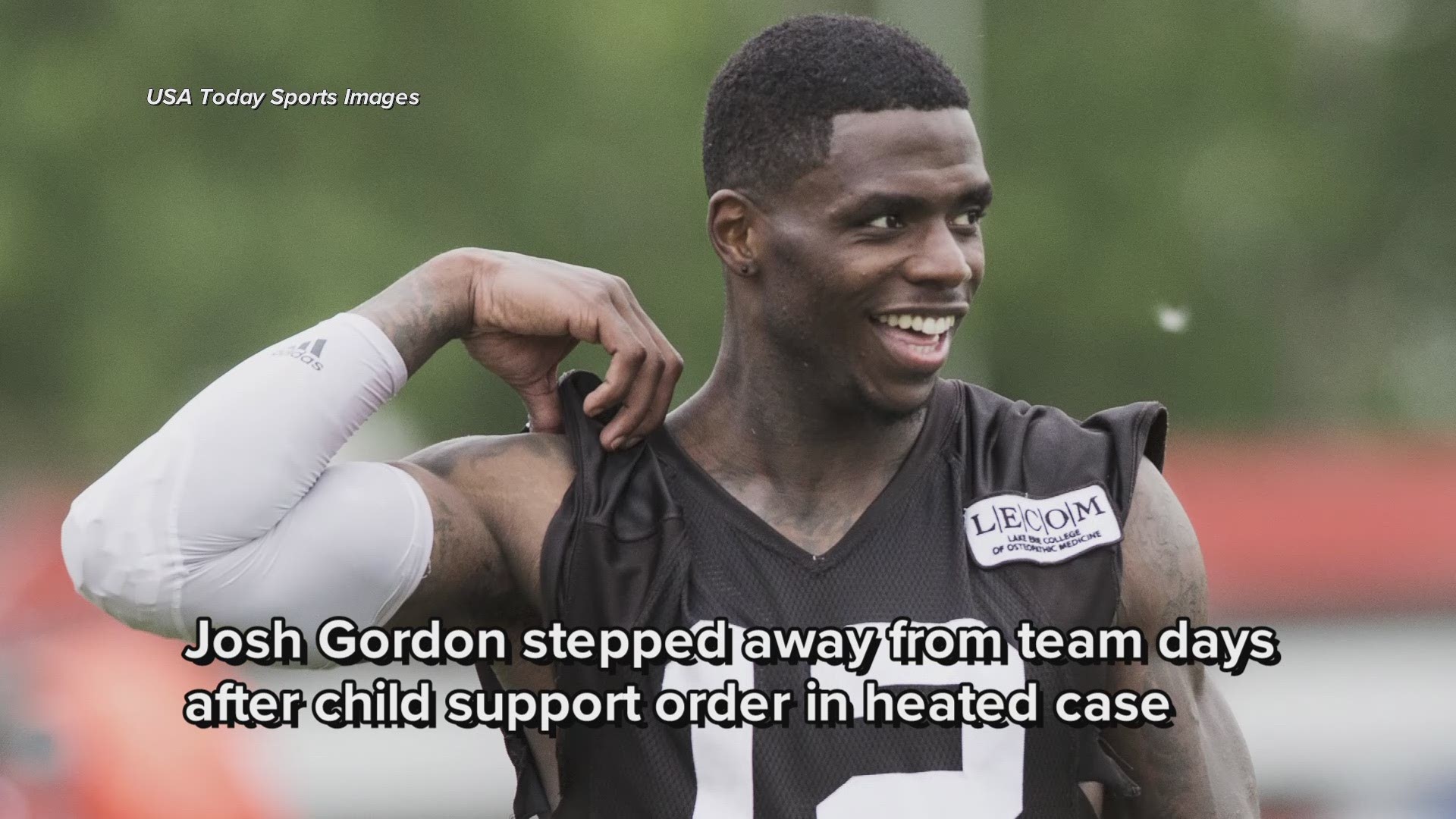 Gordon took to Twitter on July 23, surprising team officials and fans writing he would not be attending training camp as scheduled:

"To my Cleveland Browns and NFL Family,

"I am reaching out to you all personally and letting you know that I am not only doing great physically but mentally as well. You will notice that I will not be in Cleveland for the start of training camp. Rest assured, this, too, is a part of my overall health and treatment plan. I appreciate the awesome support I have received from teammates, friends, fans, and the Browns organization. Just like you, I am excited to start the season and I have every intention of being ready and available to join my teammates soon to help bring winning football to our fans.

"With the help of the NFL, NFLPA, and the Browns' organization, I have been able to utilize the resources available to me that will ensure my well-being on and off the field. By continuing to follow the plan set up by our medical director and his team and taking this time before this season starts, we believe it will help me maintain the progress I've made for not only today but for many years to come.

"Thank you all for your patience, love, and support! Go Browns!"

The Browns have said little about Gordon's departure, telling reporters they intend to respect Gordon's privacy and allow him the time he needs.

Browns senior vice president of communications Peter John-Baptiste said in an e-mail Wednesday that the team "wouldn't comment on his personal life as we are very respectful of our player's privacy."

It is unclear if the child custody case played any part in his departure.

But in September 2016, on the same day paternity was first established, Gordon abruptly announced he was entering an inpatient rehab program. He didn't play again -- and was not paid -- until the following year when he appeared in the Browns' final five games of their 0-16 season.

Gordon had an All-Pro season in 2013 when he led the NFL with 1,646 receiving yards while scoring nine touchdowns. Afterward, his life and career spiraled because of substance abuse that resulted in suspensions. He’s played just 10 games since his breakout season.

This year was expected to be Gordon’s grand return. However, his tweet clearly caught the team by surprise. His absence, however, has not stalled the voluminous child custody case that’s been unfolding in Cuyahoga County Juvenile Court since July 2015.

His child lives with her mother, Christina Lockhart, but does have some visits with Gordon, court records said.

Gordon, however, has failed to appear at several hearings, a judge wrote in court papers, as well as an early test to determine his parentage. His paternity has since been established through a DNA test. Court records show he’s also failed to comply with other court orders and discovery requests from Lockhart’s attorneys.

Many of the court disputes focused on Lockhart’s efforts to obtain Gordon’s full financial worth, which the wide receiver’s attorneys have fought to keep private.

His attorney filed court papers that show Gordon did not file income tax returns for 2015 and 2016, when he was suspended by the NFL and not paid.

Court papers also show that Gordon sent a text message in 2017 to Lockhart, which her attorney contends was an attempt to reach a settlement for $4,000 a month for Lockhart and a second woman with whom he had a child.

“After my debt and monthly bills, I’d say it could range from 2-4k for U and [the second mother],” he texted. “My salary goes up next year so I could afford more & after that hopefully a new contract & I can afford more but for now…I can barely afford any of it.”

Gordon did submit W-2 statements for 2015 and 2016 from the NFL Players Association and from training camp payments he received from the Browns. He also included a 1099 form from merchandise sold under his nickname “Flash.” The amounts were not included in records released by the court.

While Gordon has been away from the team, his attorney filed a court motion on July 31 asking that the temporary child support payments be rescinded. The order remains in place.

The first payment was due Aug. 1, however, the payment has not yet been received, Lockhart's attorney, Joseph Stafford said. Any child support payments will come through the state and will be deducted from Gordon's paycheck from the Browns.

Staffford says he sees a pattern of Gordon failing to pay his support but he's unsure if the court case is related to his sudden departures from the team.

"I don't know what his issues are and if they are connected or not connected to his overall issues," Stafford said. "...but there seems to be a long pattern of conduct."

Stafford said Gordon is scheduled for a deposition later this month. Meanwhile, he said, the payments are set to remain in place through at least December.

Stafford also denied making any threats to embarrass Gordon. He said he is merely trying to determine Gordon's true financial worth and ensure his client receives appropriate support.

Gordon's attorney Tanja Holecek wrote in a motion opposing the order that the support payment amount was derived without the introduction of paychecks or testimony by either Gordon or Lockhart.

In a phone call Wednesday, Holecek requested questions be e-mailed to her office. One question e-mailed by WKYC.com centered on whether the child support issue was connected to his decision to leave the team.

Holecek never responded to the e-mail or a follow-up message.

In court papers, Holecek wrote of Gordon's inability to make the Aug. 1 payment.

“In fact, [Gordon] is not working, and according to his contract with the Cleveland Browns, he would not receive his first regular paycheck of the season until Sept. 9, 2018, if everything goes as planned.”

Holecek noted that Gordon would have been due a per diem, had he appeared with the team during training camp.

“However, because [Gordon] is missing training camp to pursue treatment, such income is in doubt.”