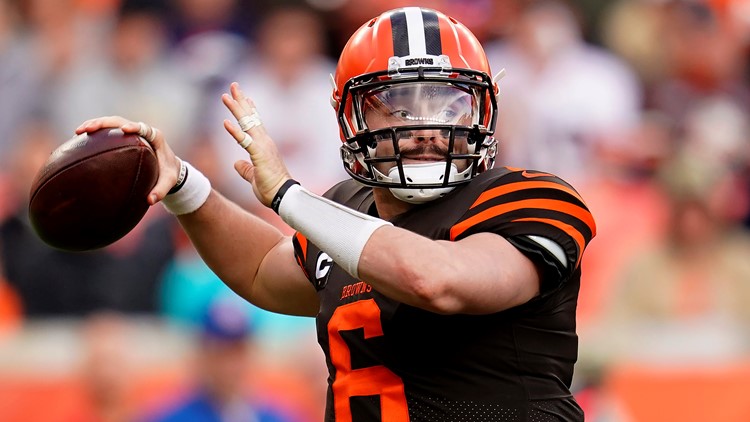 Photo by: Jack Dempsey/AP
Cleveland Browns quarterback Baker Mayfield (6) throws against the Denver Broncos during the first half at Empower Field in Denver on Sunday, November 3, 2019.

CLEVELAND — When the 2019 NFL schedule was first announced, the Cleveland Browns' Week 13 matchup vs. the Pittsburgh Steelers figured to be one of its most highly anticipated games.

And as a result, kickoff for the contest was scheduled for 4:25 p.m. ET, putting a national spotlight on the second matchup of the season between the two AFC North rivals.

But while the second game between the Browns and Steelers in a three-week span will still have potential playoff implications, the league has used its ability to flex its schedule to highlight the matchup between the Kansas City Chiefs and Oakland Raiders. In order to do so, the NFL has rescheduled the Browns- Steelers contest at Heinz Field to a 1 p.m. ET kick.

Cleveland Browns quarterback Baker Mayfield (6) celebrates with wide receiver Jarvis Landry (80) after a 1-yard touchdown pass to Landry during the first half of the team's NFL football game against the Pittsburgh Steelers, Thursday, Nov. 14, 2019, in Cleveland. (AP Photo/David Richard)
AP

Despite the less glamorous start time, the Dec. 1 rematch between the Browns (4-6) and Steelers (5-5) will feature no shortage of intrigue, with the two teams currently separated by just one game in the AFC Wild Card standings. Of course, it's also worth noting that the two teams were involved in a massive brawl in the closing seconds of Cleveland's 21-7 victory over Pittsburgh at FirstEnergy Stadium last Thursday, which resulted in an indefinite season-ending suspension for Browns defensive end Myles Garrett, as well as a one-game suspension for defensive tackle Larry Ogunjobi and a three-game suspension for Steelers center Maurkice Pouncey.

All three players are currently appealing the league's punishment.

RELATED: Cleveland attorney says Myles Garrett’s actions crossed the line, but would be difficult to prosecute