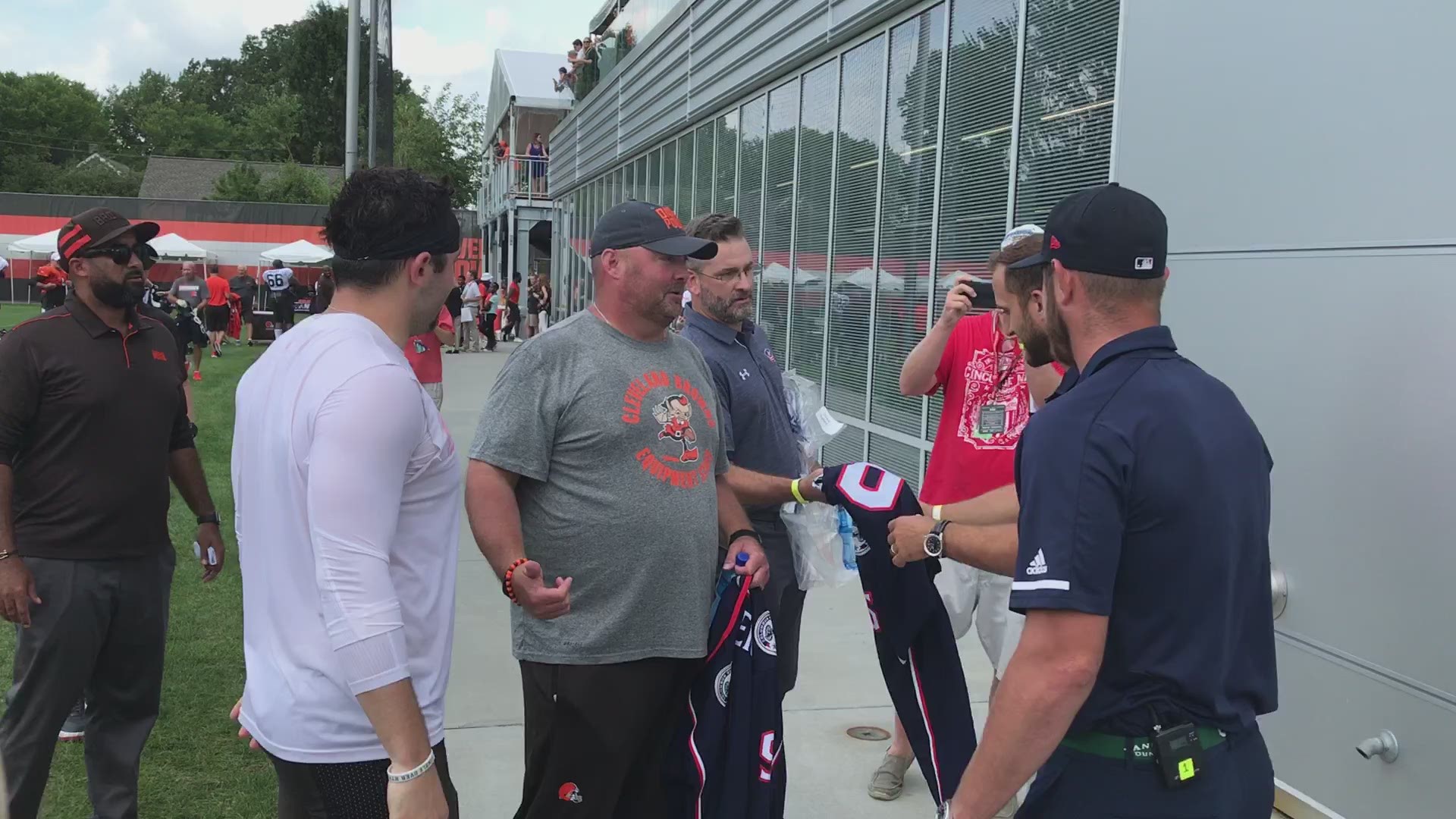 BEREA, Ohio — Cleveland Browns quarterback Baker Mayfield did not make many friends in Columbus, Ohio on his first visit to Ohio Stadium during the 2017 season, but the act of planting the flag at midfield after a win over the Ohio State Buckeyes drew respect from others in the sports world.

Columbus Blue Jackets center Brandon Dubinsky was at the game, and while he was rooting for the Buckeyes, he appreciated the kind of confidence it took for Mayfield to come into Columbus, handily win a game and celebrate without apology following the victory.

“I started out not being a fan, but secretively, kind of the way that I am, a little bit brash, I like that intensity,” Dubinsky said on a visit to Browns camp Tuesday.

“I thought it was great, but being a fan of Ohio State, we didn’t love it too much. We talked about him going into the game last year, and he’s the type of guy that his teammates seem to follow, and he’s a really fun guy to watch. He’s competitive, especially for his age.”

RELATED: The Cleveland Browns are a trendy choice entering the 2019 NFL season -- Bud Shaw's You Said It

The 24-year-old Mayfield broke a three-way tie with future Hall of Fame quarterback Peyton Manning and Seattle Seahawks Pro Bowl signal-caller Russell Wilson for the most touchdown passes ever thrown by a rookie in the waning minutes of the 2018 regular-season finale against the Baltimore Ravens at M&T Bank Stadium in Baltimore.

“It’s insane how competitive he is, how mature he is and is just fun to watch,” Dubinsky said. “You’re seeing it with this team and the players that they’re getting because players want to play with him, players want to be around him. I think that’s one of the reasons why this team is heading in the right direction because of a guy like that, and it’s really impressive to see that, especially from a guy his age.”

Columbus captain Nick Foligno added, “As athletes, you just appreciate each other’s crafts. I think you awe at some of the things these guys can do on the field, and I’m sure they awe at what we can do on a thin piece of blade. It’s really cool to be able to share that and appreciate each other’s sports. We’re fans of these guys. We’re fans of sports in general, so when we get to meet them, we get excited like a kid would.”

Then, during the offseason, the Browns added Pro Bowl talent in defensive end Olivier Vernon, wide receiver Odell Beckham Jr. and Kareem Hunt through trades and a free-agent signing, respectively.

“I’m excited to see what these guys can do because they’ve gone through a hard enough time where they appreciate that, and we’ll see if they can put it on the field,” Foligno said.