The NFL announced on Friday that it has suspended Cleveland Browns running back Kareem Hunt for the first eight games of the 2019 season for violating its personal conduct policy. 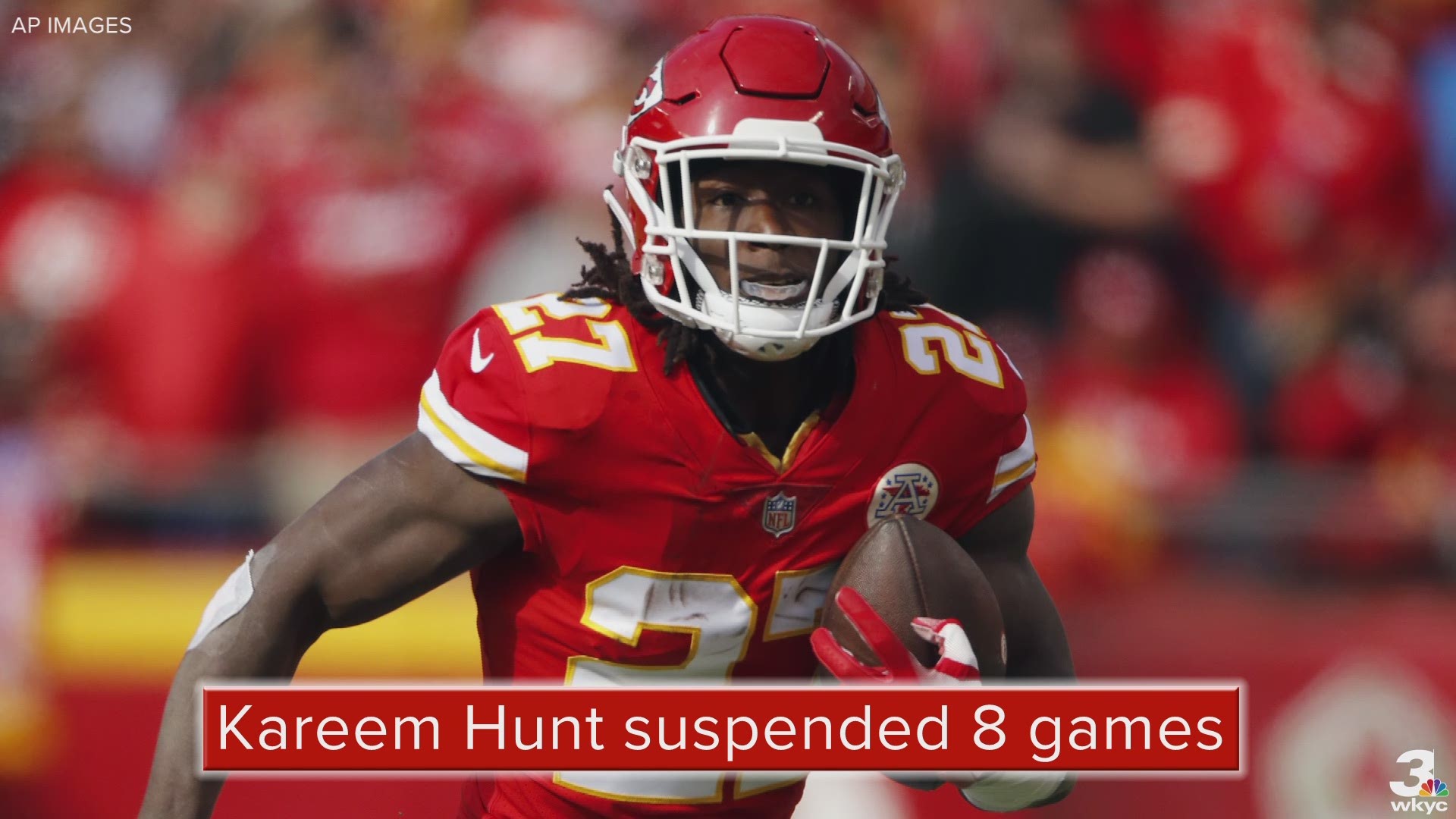 When the Cleveland Browns first signed Kareem Hunt last month, they did so knowing his future was cloudy.

It appears they now know when the troubled running back will first be eligible to play for his hometown team in 2019.

On Friday, the Browns announced that the NFL has suspended Hunt eight games for violating its personal conduct policy. Hunt will not appeal the suspension, which comes as the result of multiple off-field incidents that have been under investigation by the league since last November.

In November, video surfaced of the then-Kansas City Chiefs running back involved in a February 2018 skirmish at The Metropolitan at the 9 hotel in downtown Cleveland. In the video, the Willoughby native can be seen both pushing and kicking a 19-year-old female Kent State student.

The NFL placed Hunt, 23, on its commissioner's exempt list on Nov. 30, with the Chiefs releasing him the same day.

Credit: Kelvin Kuo
Kansas City Chiefs running back Kareem Hunt runs down the field during the second half against the Los Angeles Rams at Memorial Coliseum in Los Angeles, California, on Monday, November 19, 2018.

In addition to the altercation at The 9, the NFL also cited a fight at Put-in-Bay that occurred last June when announcing Hunt's suspension. Hunt wasn't arrested or charged in either incident.

“I want to again apologize for my actions last year," Hunt said in a statement released by the team. "I know that my behavior hurt a lot of people, and I again apologize to them. I respect the league’s decision on discipline, and I appreciate the time I spent with Commissioner Goodell last week. I’m grateful for my time with the Browns over the last month and thankful to all the people in the organization that have welcomed me. I also appreciate all of the support I received from my union through this process. My commitment to earning the trust of the league, my teammates, the organization and this community through my actions will continue, and I understand there is a lot of hard work ahead of me before I’m able to fully return to playing the game I love.”

Despite the uncertainty surrounding his availability, Cleveland signed Hunt to a one-year contract last month, with Hunt set to become a restricted free agent in 2020. Browns general manager John Dorsey, who drafted Hunt in Kansas City, has vouched for his new running back, stating that despite his transgressions, he still "has a really good heart."

Credit: Marcio Jose Sanchez
The Cleveland Browns have signed running back Kareem Hunt despite his facing league discipline for assaulting a woman at a Cleveland hotel last February.

He also happens to be a really good football player.

In his two seasons with the Chiefs, Hunt established himself as one of the best running backs in football, rushing for a league-high 1,327 yards and 8 touchdowns as a rookie in 2017. In the first 27 games of his NFL career, the former Toledo star amassed 2,984 total yards (2,151 rushing, 833 receiving) and 25 touchdowns (15 rushing, 10 receiving), earning Pro Bowl honors in 2017.

In coming to Cleveland, Hunt joins one of the NFL's best young offenses, which features quarterback Baker Mayfield, wide receivers Odell Beckham Jr. and Jarvis Landry, tight end David Njoku and running back Nick Chubb. Following the team's signing of Hunt, it has been reported that the Browns are already shopping running back Duke Johnson, with Hunt's suspension set to end around the time of the league's trade deadline.