Odell Beckham Jr. and Jarvis Landry grace the cover of this week's Sports Illustrated, which marks the ninth time the Cleveland Browns have been featured on the mag 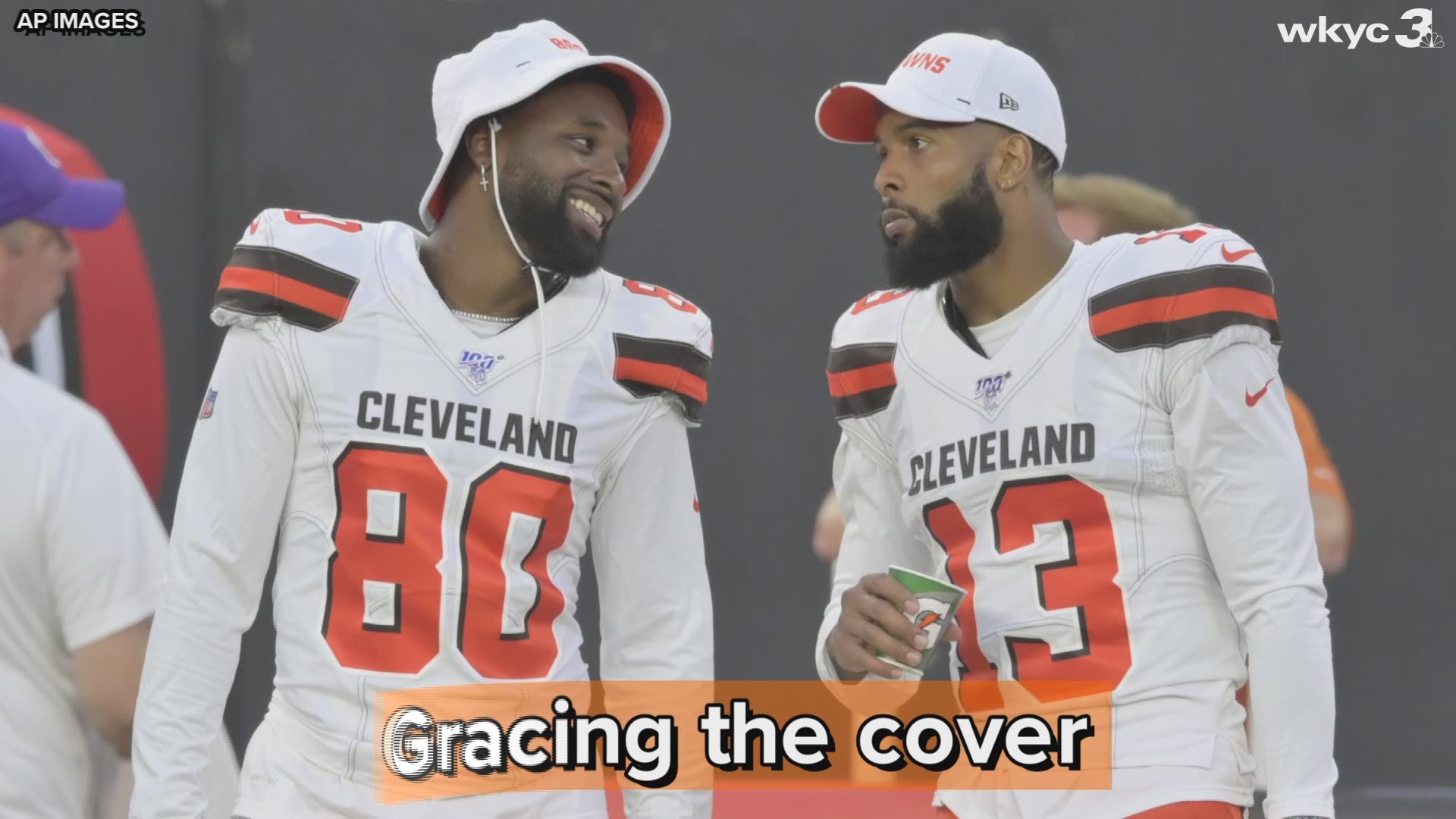 This week marks the ninth time a member -- or members -- of the Browns has graced the cover of sports' most historic magazine, which published its first issue in 1954.

The Browns' history on the cover of S.I. dates back to the days of illustrated images and includes some of the team's most historic -- and in at least one case, notorious -- players. With that in mind, let's take a look back at the nine times the Browns have made the Sports Illustrated cover with some help from the S.I. covers archive.

The first time the Browns were ever featured on the cover of Sports Illustrated came midway through the 1956 season in the magazine's third year of publication. Founder and head coach Paul Brown was depicted in a portrait alongside Cleveland quarterback George Ratterman.

"Can they keep the Cleveland Browns on top?" read the headline of the cover, which was published two days after a 14-10 win over the Pittsburgh Steelers.

The answer turned out to be "no," as the 2-time defending champion Browns saw their 10-year playoff streak come to an end that same year, marking the first year the team had missed the postseason in its existence.

The Browns would have to wait nearly four more years for their next Sports Illustrated cover, which featured a portrait of Hall of Fame running back Jim Brown along with the headline "Secrets of a fullback."

In a Players' Tribune-esque format that was arguably ahead of its time, Brown detailed the secrets to his success during what ultimately amounted to his fourth consecutive NFL rushing title.

"When a tackler closes in I counteract his force with two blows: one with my shoulder, the other with my free arm," Brown wrote in his essay, which was published one day after a 28-20 victory over the Steelers. "I do not ram him with my head, but I do tuck my body lower to gather my strength. First I knock him off balance with my corresponding shoulder (right against right, left against left). Then I deliver a full, powerful blow with my forearm, aiming it for his chest or midsection. "

More than two decades would pass before the Browns' next S.I. cover, which came on the eve of the 1982 season. The cover featured Fairview Park native and former Ohio State star linebacker Tom Cousineau, who was preparing for his first season with the Browns after spending the first three years of his professional career in the Canadian Football League.

The article -- "Paving the way for $$$" -- chronicled the former St. Edward's star's unconventional journey back to his hometown after he had initially been selected by the Buffalo Bills with the top pick in the 1979 NFL Draft.

The cover of the magazine featured a picture of Cousineau in his new Browns jersey, jumping over a pair of Detroit Lions players to attempt a tackle. "Linebacker Tom Cousineau, Cleveland's $3.5 million man," the cover read, referencing the 5-year, $3.5 million contract he had just signed with the Browns.

In what would mark the first of two Sports Illustrated covers he would be featured on, quarterback Bernie Kosar served as the subject of the August 26, 1985 edition of the magazine, along with the headline, "Banking on Bernie."

In an article titled "There's a Love Feast on Lake Erie," Douglas S. Looney profiled the then-rookie quarterback's journey to the Browns and the lofty expectations he faced upon his arrival in Cleveland.

"It's all upbeat and wonderful now," Looney wrote. "That's because Kosar, who helped the University of Miami win a national championship in '83 and had another outstanding year in '84, wasn't just willing to play in Cleveland; he had desperately sought the opportunity. There were a lot of shenanigans involving his quest to come to Cleveland, and all-out efforts by Houston and Minnesota to keep it from happening. But please, this is a 21-year-old wunderkind who was willing to dream, hope, yes, pray to get the chance to play in Cleveland. This is not a typo. Never have a player and a team and a city lusted after one another so shamelessly."

Three years after doing it as a rookie, Kosar was once again featured on the Sports Illustrated cover on the eve of the start of the NFL season.

"What Kosar likes most is being one of the guys, not the star who gets mobbed by hordes of screaming fans, who is supposed to take limos and be a cut above his teammates," Telander wrote.

"I'd rather blend in," Kosar said. "It's impossible because I'm the quarterback, I know. But I'd like to."

Although neither was a member of the Browns at the time, both Tim Couch and Akili Smith were wearing Cleveland jerseys on the April 18, 1999 S.I. cover -- along with "Big Dawg" John Thompson.

The issue doubled as Sports Illustrated's preview of the 1999 NFL Draft, in which the expansion Browns laid claim to the No. 1 pick. In the cover story written by Peter King, the veteran NFL writer explored the decision the "new" Browns were facing and how it was complicated by whether Couch or Smith would be easier to sign.

The Browns ultimately drafted -- and signed -- Couch, who spent five seasons with the franchise and helped lead Cleveland to its only post-1999 playoff appearance in 2002.

In arguably the most random Sports Illustrated cover the Browns have been the subject of, running back Lewis can be seen running through drills during the team's training camp in 2007.

The former Baltimore Ravens running back, however, was merely meant to serve as a symbol for a story by King on established players playing on new teams, which hardly focused on Lewis aside from mentioning him by name once.

After trading up to select Johnny Manziel with the No. 22 pick in the 2014 NFL Draft, the Browns were the talk of the league -- and they have the Sports Illustrated cover to prove it.

Accompanying a picture of Manziel flashing his signature "money" sign after being selected are the words "Johnny better be good, because how much more suffering can a city take?"

In the story titled "Johnny Fever" by Mark Bechtel, the author explores Cleveland's decision to pick the polarizing Heisman Trophy winner and what it might mean for both the city and the franchise. Ultimately, Manziel lasted just two seasons with the Browns as off-field issues brought an early end to his NFL career.

With Beckham and Landry featured on a cover alongside a prediction that Cleveland would win its first division title in 30 years, writer Ben Baskin profiled the Browns' journey from NFL laughing stock to the hottest team in the league.

"It’s no coincidence, those in northern Ohio believe, that the franchise is coming full circle as the NFL celebrates its 100th anniversary," he wrote. "The league was born an hour south, in Canton; the state yielded four of the first five champions; and the Browns were a preeminent early dynasty. Even after years of heartbreak, after owner Art Modell whisked the original team away to Baltimore; even after a singular futility since returning, with just one postseason appearance in two decades, the fans have largely remained."