The Cleveland Browns have waived kicker Zane Gonzalez after he missed four kicks in Sunday's 21-18 loss to the New Orleans Saints at the Mercedes-Benz Superdome. 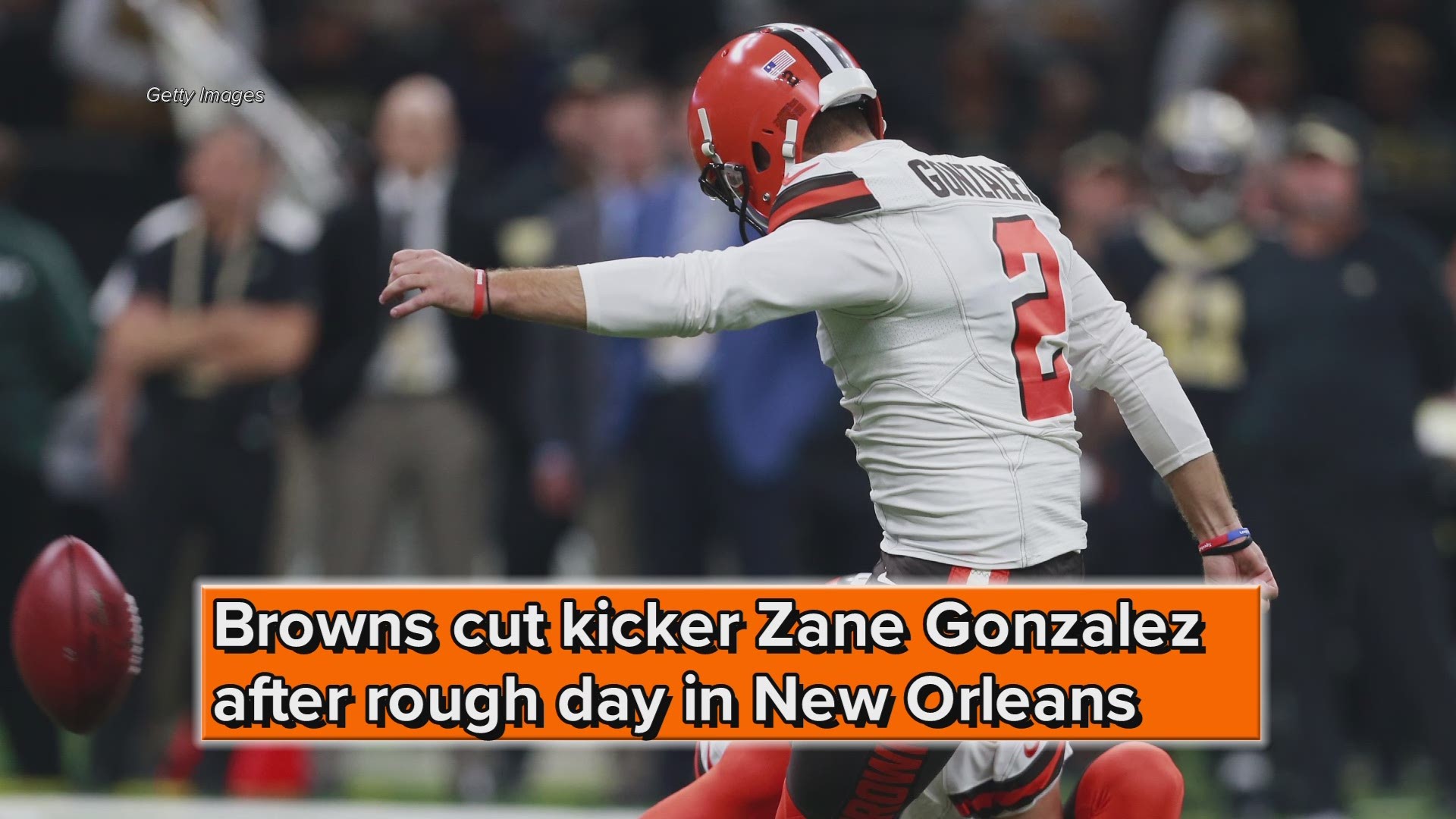 CLEVELAND -- The Cleveland Browns have a new kicker.

Less than 24 hours after watching kicker Zane Gonzalez miss two extra points and a pair of field goals in a 21-18 loss to the New Orleans Saints at the Mercedes-Benz Superdome, the Browns waived the second-year specialist and signed rookie Greg Joseph.

ESPN’s Adam Schefter first reported that the Browns had waived Gonzalez and the Minnesota Vikings parted ways with rookie kicker Daniel Carlson after the two combined to miss seven kicks in their respective games Sunday.

Browns and Vikings both have now waived their former kickers Zane Gonzalez and Daniel Carlson, per sources.

Gonzalez was selected by the Browns with the 224th pick in the 2017 NFL Draft after the team endured several missed field goals from former Pro Bowler Cody Parkey in 2016, but the NCAA’s most prolific kicker struggled with consistency issues with the Browns.

During his first season with the Browns, Gonzalez missed two field goals between 30 and 39 yards, another two attempts between 40 and 49 and one from over 50. Additionally, Gonzalez missed a point-after-touchdown try.

For the season, Gonzalez converted 15 of his 20 field goal tries and 25 of his 26 PAT attempts.

In two games this season, Gonzalez was two for five on field goal attempts with a pair of misses and one block. Additionally, Gonzalez was three of five on extra-point tries.

According to Schefter, Gonzalez was batting a leg injury while kicking for the Browns (0-1-1) against the Saints (1-1).

“Turns out Browns’ kicker Zane Gonzalez, who is losing Cleveland’s kicking job this week, has been kicking with a groin injury that requires an MRI today, per source,” Schefter tweeted. “Browns could reach an injury settlement with him or put him on waivers, injured.”

Turns out Browns' kicker Zane Gonzalez, who is losing Cleveland's kicking job this week, has been kicking with a groin injury that requires an MRI today, per source. Browns could reach an injury settlement with him or put him on waivers, injured.

After having a game-winning try blocked in last week’s 21-21 tie with the Pittsburgh Steelers, Gonzalez missed four kicks for the Browns, including the go-ahead and tying attempts inside the final two minutes of play against the Saints.

After running back Carlos Hyde rushed for a one-yard touchdown, the Browns led the Saints by a 12-3 count with 6:43 to play in the third quarter. However, the Browns missed the chance to go up by 10 points when Gonzalez pulled the attempt wide left.

The Browns started the fourth quarter with possession of the football and marched from their own 18-yard line to the New Orleans 26, but when the offense stalled, Gonzalez was sent onto the field for a 44-yard attempt.

Like the first missed PAT, Gonzalez pulled the kick wide to the left.

Credit: Chuck Cook
Cleveland Browns kicker Zane Gonzalez (2) is consoled by long snapper Charley Hughlett (47) after missing on an extra point attempt against the New Orleans Saints in the second half at Mercedes-Benz Superdome in New Orleans, Louisiana.

The Saints scored 15 straight points in the fourth quarter, but the Browns drew even at 18-18 when wide receiver Antonio Callaway hauled in a 47-yard touchdown pass from quarterback Tyrod Taylor with 1:16 to play in regulation.

But for the third time in a row, Gonzalez missed the kick wide to the left.

Then, after the Saints took a three-point lead with 21 seconds remaining, the Browns worked the ball down the field from their own 25-yard line to the New Orleans 34 after Taylor completed passes of 25 and 16 yards to Jarvis Landry and Callaway, respectively.

With eight seconds remaining in the fourth quarter, Jackson elected to try a 52-yard field goal, but Gonzalez pushed the ball too far to the right, which gave the win to the Saints.

Gonzalez was reportedly replaced by Greg Joseph, whose first game action will take place on Thursday night when the Browns host the New York Jets at FirstEnergy Stadium.