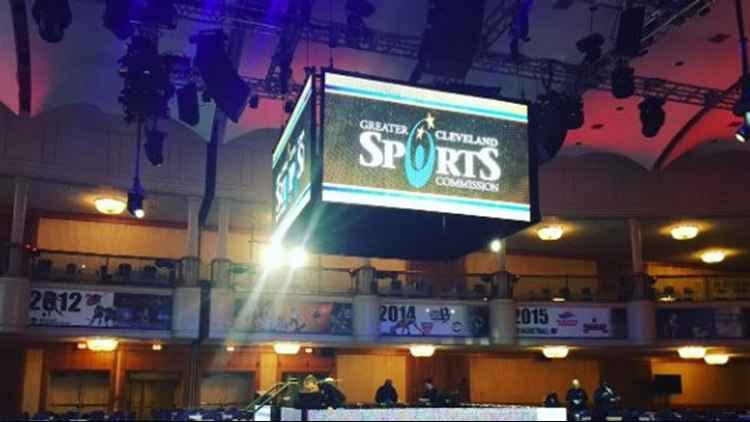 CLEVELAND — The Greater Cleveland Sports Awards turns 20 tonight and WKYC.com will be on hand to bring fans not able to attend the event a backstage look with interviews with the region’s best athletes and newsmakers.

Cleveland Browns running back Nick Chubb (24) rushes during the second half of an NFL football game against the Cincinnati Bengals, Sunday, Dec. 8, 2019, in Cleveland. (AP Photo/David Richard)
AP

Here is a look at this year’s award winners:

Professional Athlete of the Year

Stipe Miocic celebrates while being interviewed by Joe Rogan after defeating Alistair Overeem during a heavyweight title bout at UFC 203 at Quicken Loans Arena in Cleveland, Ohio on Saturday, September 10, 2016.
David Dermer

Female Collegiate Athlete of the Year

Minnesota Timberwolves' Robert Covington (33) reaches for the ball controlled by Cleveland Cavaliers' Collin Sexton (2) during the second quarter of an NBA basketball game on Saturday, Dec. 28, 2019, in Minneapolis.
Hannah Foslien/AP

Male Collegiate Athlete of the Year

In addition to the Athlete of the Year honors, the Greater Cleveland Sports Awards will recognize Skylar Scarnecchia, an eighth grader from Champion Township, Ohio, who overcame synovial sarcoma and a right lower leg amputation to become a three-sport athlete (soccer, track and volleyball).

Scarnecchia is 38 months in remission from the rare form of soft-tissue cancer.

Also, the Dolan family (Cleveland Indians owners) will be recognized with the Lifetime Achievement Award and one event will be selected as the “Moment of the Year” at the end of the night.