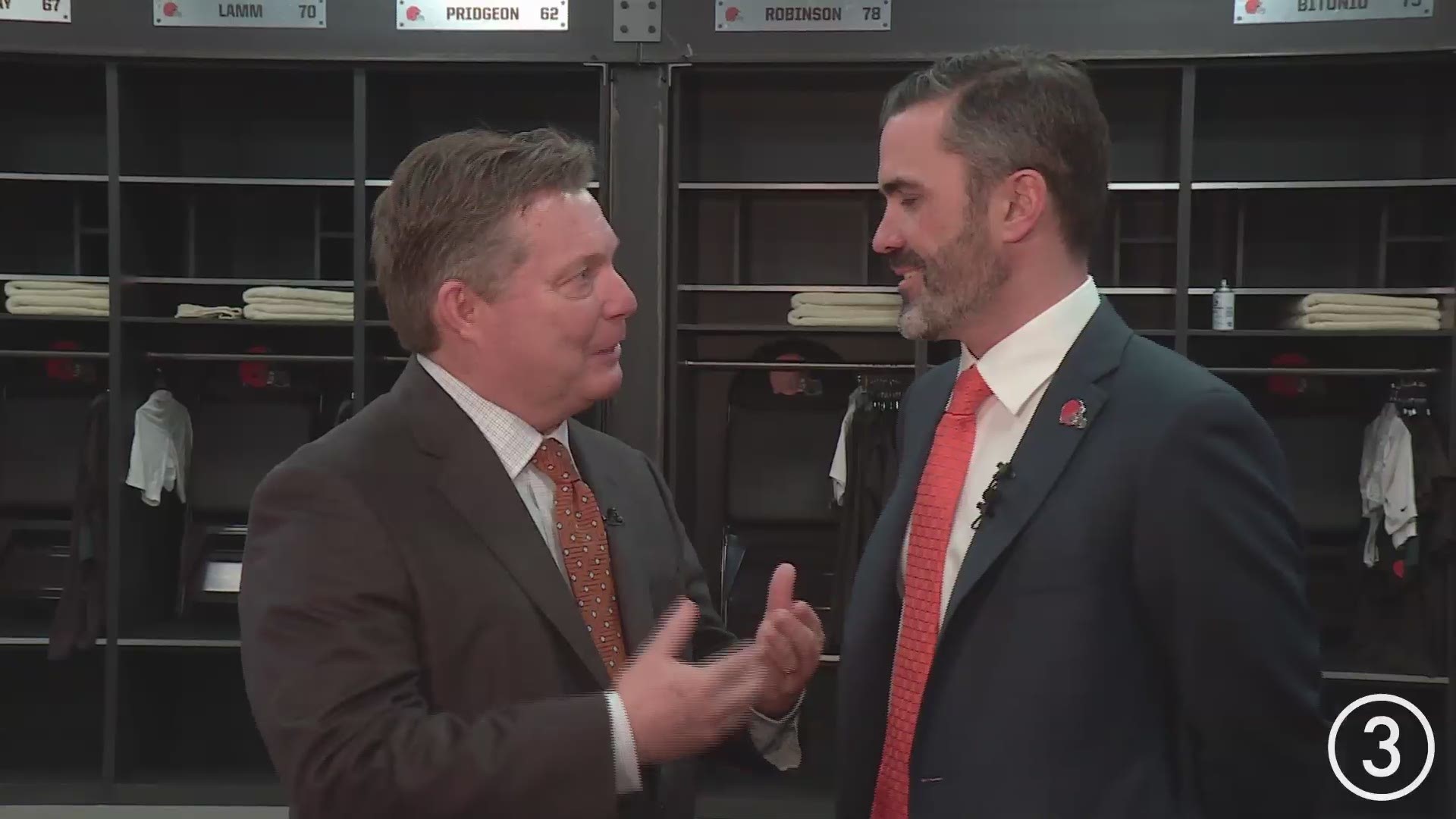 CLEVELAND — Shortly after the Cleveland Browns selected Kevin Stefanski as their new head coach, potentially concerning reports about his job's requirements began to make the rounds.

According to Dustin Fox of 92.3 The Fan, candidates for Cleveland's head coaching vacancy had to agree turn in their game plans to the owner and analytics department by Friday of each game week, in addition to attending an end-of-week analytics meeting to discuss that plan. Fox's comments came after a report from Steve Doerschuk of The Canton Repository, who said candidates didn't only have to make concessions to the analytics department, but also hours-long Monday meetings with Browns owner Jimmy Haslam.

At Stefanski's introductory press conference with the team on Tuesday, both he and Haslam took issue with various aspects of those reports.

"It's not true. That was a good one," Stefanski said, denying that he was required to meet with the team's analytics department each Friday. "It's silly season for that type of stuff, I understand that."

And while Haslam confirmed the existence of his Monday postgame meetings, he denied he would have any involvement in his team's game-planning.

"Let me ask you this: if you owned a pro football team, would you meet with the head coach the Monday after the game? Of course you would. Of course we would," Haslam told reporters after Stefanski's press conference. "The rumors out there though about presenting a game plan and those kind are just totally inaccurate. I really think they're irresponsible."

While both Stefanski and Haslam denied the specifics of the rumblings regarding their arrangement, neither denied the team's pivot toward analytics -- in fact, they embraced it. Asked specifically about his experience working with analytics, which has become a buzzword around sports in recent years, Stefanski explained that he's simply trying to obtain as much information as he can.

"I'm looking for any edge we can get on game day," the 37-year-old former Minnesota Vikings offensive coordinator said. "We're looking to make informed decisions... information is power."

To that end, meeting with the team's analytics department isn't so much a chore, but a necessity to Stefanski and the Browns' shared vision.

"Analytics, I can't say it enough -- it's a tool," Stefanski said. "How does it help on gameday? Well I would meet with some of our people out with the Vikings that would help me understand as I go into this ballgame down and distance-wise, field position-wise, where a defensive coordinator may be more apt to blitz. So really it's something where I, as a play-caller, was formulating a plan of attack, you start to take in information and that really was helpful to certain decisions that you make."