This one hurts: Cleveland Browns deal with more injuries in ugly 37-14 loss to Arizona Cardinals

Baker Mayfield turned the ball over three times while Kyler Murray lit up the Cleveland defense. 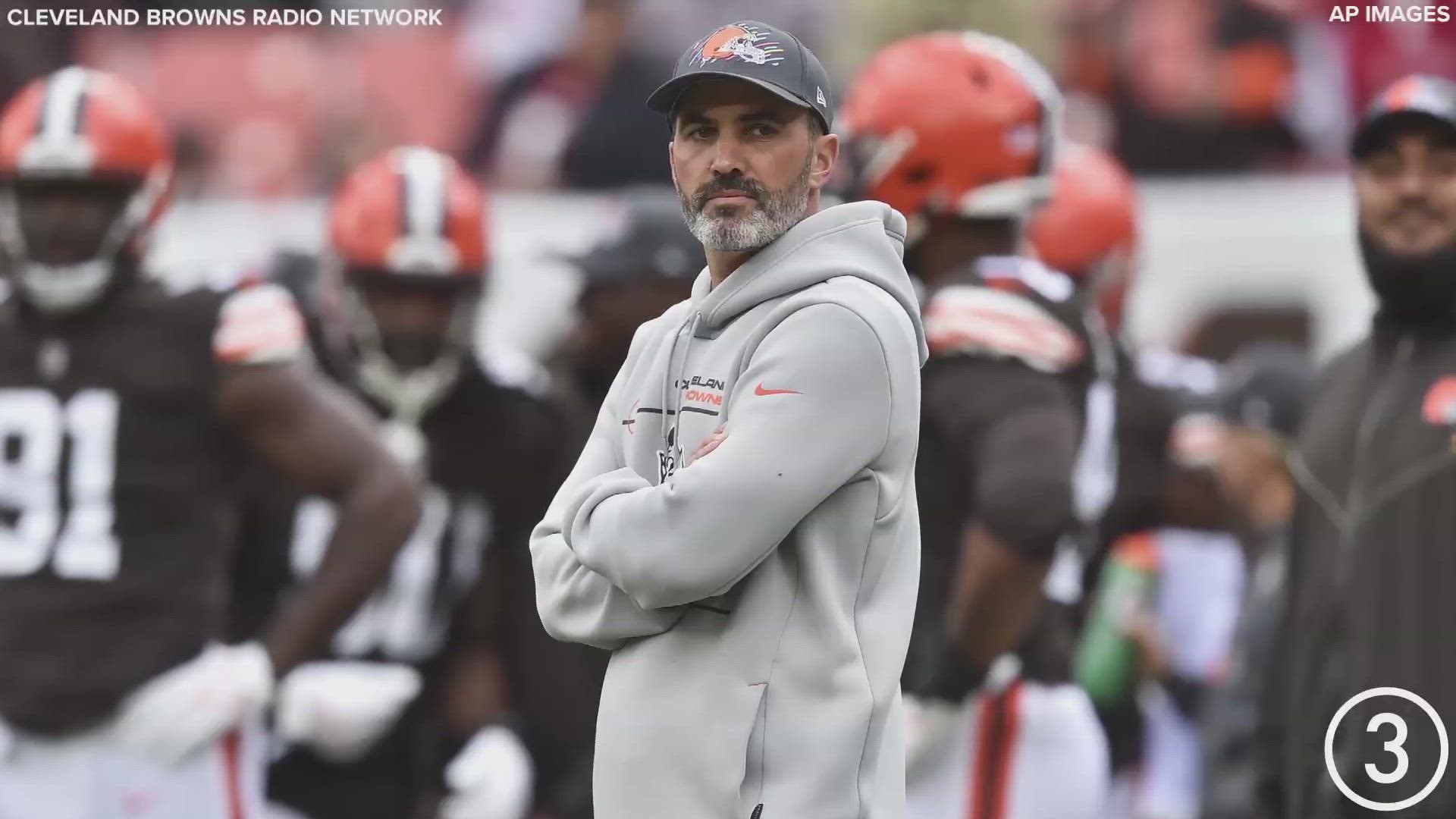 CLEVELAND — It's still early, and the Browns could very well turn things around and make a deep playoff run.

That won't happen if they play like they did Sunday, though.

Cleveland suffered its second straight loss, 37-14 to the Arizona Cardinals. While the NFC West leaders improved to 6-0, the Browns fell to 3-3, not what fans were expecting when most had them pegged as a Super Bowl contender.

The Browns were in a hole virtually from the jump, trailing 20-0 early in the second quarter. Baker Mayfield aided Arizona's efforts with both a fumble and an interception, and several questionable penalties helped keep the Cardinals moving while also drawing the ire of the FirstEnergy Stadium crowd.

Mayfield finished 19-of-28 for 234 yards and two touchdown passes to Donovan Peoples-Jones, including a 57-yard Hail Mary at the end of the first half to cut the deficit to 23-14. Cleveland appeared to be inching closer midway through the third quarter, but Mayfield coughed up the ball again and subsequently reaggravated his torn labrum in his left shoulder.

Mayfield returned for the Browns' next possession, but by that time his team trailed by 16, and a dropped fourth-down pass by Odell Beckham Jr. near the end zone removed all doubt. Worse still, Kareem Hunt injured his leg on the play, adding yet another name to Cleveland's already-lengthy medical tent.

For the Cardinals, Kyler Murray (Mayfield's former Oklahoma teammate and fellow Heisman Trophy winner) shined for virtually the entire 60 minutes, throwing for 229 yards and four touchdowns to three different receivers. On defense, Markus Golden and Jordan Hicks each had two sacks, taking advantage of a Cleveland offensive line that was without its two starting tackles.

The Browns have now lost back-to-back games for the first time under second-year head coach Kevin Stefanski. They won't have much time to lick their wounds, as they are scheduled to host the Denver Broncos in four days on "Thursday Night Football."

What follows is a comprehensive, drive-by-drive recap of today's action, with the most recent plays and updates closest to the top. Stay tuned for more analysis all evening from 3News and WKYC.com.

3:54: Case Keenum takes over at quarterback and promptly goes four-and-out. The Cardinals get the ball back at their own 33-yard line looking to run out the clock.

4:48 - Cardinals 37, Browns 14: Arizona all but puts the game away as Kyler Murray hits A.J. Green for his fourth touchdown pass of the afternoon from 14 yards out.

12:06: Baker Mayfield returns and leads the Browns deep into Arizona territory, but on fourth-and-4 from the 7, Odell Beckham Jr. drops a sure-fire first-down pass for the second week in a row. The Cardinals take over.

In more bad news, Kareem Hunt is now hurt, and Cleveland is down to its third-string running back.

2:56 - Cardinals 30, Browns 14: The Cardinals take advantage of the turnover as Kyler Murray finds a wide-open DeAndre Hopkins for a nine-yard touchdown.

You left the best receiver in the NFL open? 🧐@DeAndreHopkins x #RedSea pic.twitter.com/xcgoIREjk5

7:23: Everything that could go wrong does go wrong... and all in one play.

J.J. Watt forces a Baker Mayfield fumble and recovers it at the Cardinals 46. Even worse, Mayfield appeared to reaggravate his already-injured shoulder and could be seen screaming on the ground in pain.

9:55: Another three-and-out for the Cardinals as Cleveland's secondary shuts things down. After a long Any Lee punt, Demetric Felton returns it 21 yards, giving the Browns the ball at their own 32.

10:40: The Browns suffer their first official three-and-out of the day as Baker Mayfield is sacked twice, including for the second time by Markus Golden. Jamie Gillan boots it 52 yards and Rondale Moore returns it to the Cardinals 28.

Odell Beckham Jr. is out of the locker room, however, and appears to be headed back into the game.

12:59: For the first time today, the Cardinals fail to score, as a Myles Garrett sack of Kyler Murray helps lead to a three-and-out. Demetric Felton returns Andy Lee's punt to the Browns 33-yard line.

0:00 - Cardinals 23, Browns 14: An unbelievable sequence to end the half. With no timeouts, the Browns manage to get to their own 43 before Baker Mayfield throws up a Hail Mary to the end zone. Donovan Peoples-Jones hauls it in as time expires, and Cleveland has some momentum heading into intermission.

0:34 - Cardinals 23, Browns 7: The Cardinals stall in Browns territory and settle for a Matt Prater 33-yard field goal, his third of the day.

5:06 - Cardinals 20, Browns 7: At long last, the Browns' offense wakes up, as Baker Mayfield and Kareem Hunt lead a methodical drive before Donovan Peoples-Jones hauls in an 11-yard touchdown catch.

The bad news? Odell Beckham Jr. injured his right shoulder after making a catch and is headed to the locker room.

9:24 - Cardinals 20, Browns 0: The Browns finally get a big play on defense as Jadeveon Clowney sacks Kyler Murray on third down. However, Matt Prater just slips through a 51-yard field goal, and Arizona extends its lead.

11:26: Baker Mayfield turns it over again, this time by air-mailing an open Rashard Higgins and getting picked off by Robert Alford. Alford returns the interception inside the Browns 5, but upon further review he is instead ruled out of bounds at the 28.

13:02 - Cardinals 17, Browns 0: The Cardinals finally fail to convert on third down, but Matt Prater still nails a 36-yard field goal to make it a three-possession game.

13:53: Disaster for the Browns, as Baker Mayfield fumbles after being hit by Markus Golden. The Cardinals recover and have the ball right back at Cleveland's 18 looking to go up three scores.

14:49 - Cardinals 14, Browns 0: The Browns were victims of a slew of penalties (some of which were questionable, at best) and the long drive ends with a 13-yard Kyler Murray touchdown pass on a screen to DeAndre Hopkins. Cleveland now faces its largest deficit of the season so far.

5:10: After a nice drive, Kevin Stefanski again elects to go for it on fourth-and-3 from the Cardinals 13. Unfortunately, Baker Mayfield is sacked for the fourth time on fourth down this year, and Arizona takes over at its own 22.

8:34 - Cardinals 7, Browns 0: The much-maligned Browns defense gets off to a rough start, as the unit bites on a 40-yard Chase Edmunds draw play before Kyler Murray finds Christian Kirk for a 21-yard touchdown pass on third-and-19.

The throw 😱
The catch 🔥 pic.twitter.com/Dy2QvV1hXC

13:34: An illegal formation penalty nullifies a first-down toss to Austin Hooper, and the Browns are eventually forced to punt. Rondale Moore returns Jamie Gillan's kick to the Cardinals 26.

3 p.m.: Besides Nick Chubb, Jarvis Landry, Jedrick Wills Jr., and Jack Conklin, linebacker Malcolm Smith and cornerback A.J. Green will also be out for the Browns due to injuries. Thankfully, defensive end Jadeveon Clowney and corners Denzel Ward and Greg Newsome II will be back on the field.

1 p.m.: Fans were certainly happy to be back tailgating in the Muni Lot after two straight road games. Check out some of the best photos from 3News photographers.