The All-Pro lineman got to Justin Fields 4 1/2 times to put his name in the record books. 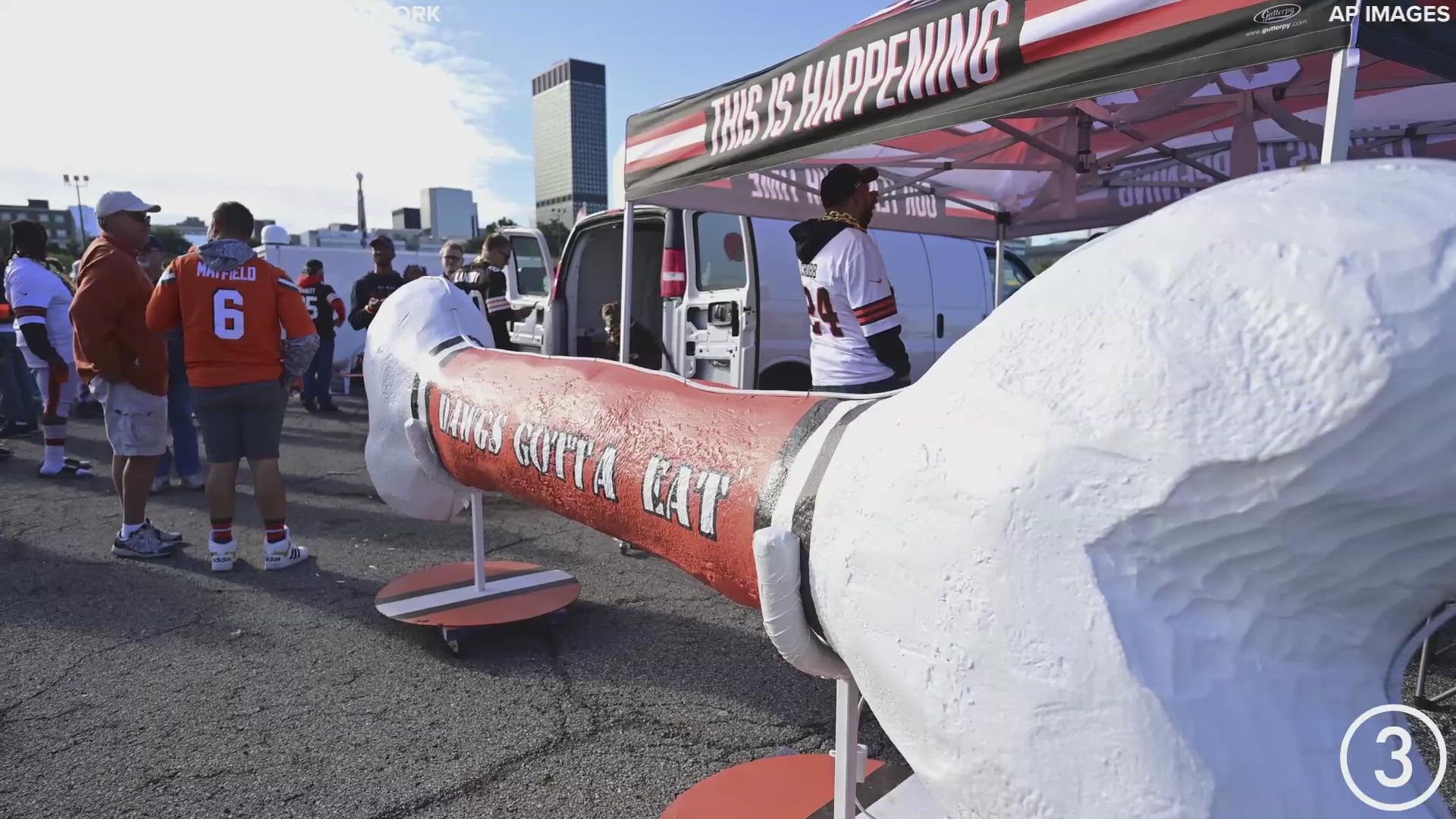 Boy, did they ever.

Cleveland pummeled the Chicago Bears 26-6 to improve to 2-1 on the season. Chicago managed just 47 yards of total offense, including only one through the air.

The star of the afternoon was Myles Garrett, who set a new Browns franchise record with 4 1/2 sacks. In total, Cleveland sacked Bears rookie quarterback Justin Fields nine times and held him to a mere six completions for 68 yards.

Heading into action, the big story was the return of Odell Beckham Jr., and the receiver had a sold 2021 debut with five catches for 77 yards. Baker Mayfield also had a nice game, withstanding five sacks himself to throw for 246 yards and a touchdown pass to Austin Hooper.

The Browns' offense got off to a bit of a slow start with two fourth-down conversion failures, but kicker Chase McLaughlin held things steady with four field goals, including a 57-yarder to tie the game at three. From there, Willoughby South's Kareem Hunt took over, tallying 155 yards from scrimmage and a 29-yard fourth-quarter TD to help put things out of reach in the fourth quarter.

Besides Fields' rocky outing in his first NFL start, Bears running back David Montgomery also struggled with 34 yards on 10 carries. On a positive note, linebacker Khalil Mack fought off a foot injury to record a pair of sacks.

The Browns are now 2-1 for the second straight season, the first time they've done that since 2002 (three straight years). They'll hit the road next Sunday for a matchup with the Minnesota Vikings.

What follows is a comprehensive, drive-by-drive live recap of today's action, with the most recent plays and updates closest to the top. Stay tuned for analysis throughout the day on both 3News and WKYC.com.

2:56: Trying to save a little face, the Bears go for it on fourth down from deep in their own end, but Justin Fields is sacked for the ninth time. Jadeveon Clowney does the damage, and the Browns get the ball at the Chicago 21 looking to ice the game away.

9:18: Folks, Myles Garrett has made history.

The Browns' stud lineman sacks Justin Fields again, giving him a new franchise record with 4 1/2 on the day. What's more, Demetric Felton breaks off a 24-yard punt return to give Cleveland the ball at its own 49.

That's a franchise record for sacks in a game for @Flash_Garrett.

10:40 - Browns 23, Bears 6: The Browns are able to burn some clock with a solid run game, but after a Baker Mayfield pass to Harrison Bryant sails wide, they settle for a 52-yard field goal by Chase McLaughlin. It's now a three-possession lead for the Browns.

13:40: A Denzel Ward penalty does no damage and Bears have to put again. Pat O'Donnell boots it deep and the Browns will have it at their own 14.

A 23-yard reception on a scree pass gets the Browns in field goal range, and then three plays later, he dashes 29 yards for the touchdown. Cleveland has its largest lead of the day, with Hunt as both the team's leading rusher and receiver.

1:43 - Browns 13, Bears 6: The Browns appeared to get an interception from John Johnson III, but instead it's called back due to a controversial pass interference call. The flag sets up a 22-yard Cairo Santos field goal to make it a one-possession game.

5:45: The Bears' defensive front is also having a solid day, with five sacks of their own against Baker Mayfield. This time it's Robert Quinn to force a Browns three-and-out, and Chicago will take over at its own 31 following a Jamie Gillan punt.

Justin Fields is sacked for the sixth time, and again by who else by Myles Garrett. Chicago is again forced to punt, and the Browns get the ball at their own 24.

9:32 - Browns 13, Bears 3: A great sideline catch by Odell Beckham Jr. sets up a 41-yard Chase McLaughlin field goal to give the Browns a two-score advantage.

13:58: Things just keep getting better for the Browns.

Takk McKinley and Malik Jackson team up to sack Justin Fields on third down, the fifth sack of the game for the Cleveland defense. What's more, Demetric Felton returns Pat O'Donnell's punt 23 yards all the way to the Bears 44.

0:00: The Bears almost get a nice kickoff return from Khalil Herbert, but a penalty nullifies it, and Chicago instead decides to run out the clock and head into halftime.

0:19 - Browns 10, Bears 3: The Browns finally find the end zone as Baker Mayfield finds Austin Hooper for a 13-yard touchdown just before the half.

Throw it up to @AustinHooper18!

2:54: Myles Garrett has been unleashed.

The star defensive end now has 2 1/2 sacks on the day after bringing down Justin Fields again. Yet another penalty on the punt return pushes the Browns back, however, and the Browns will start at their own 11 looking to score before halftime.

Myles Garrett has 2.5 sacks in the first half alone. #Browns

5:37: Another drive into Bears territory comes up empty as Baker Mayfield is sacked again, this time by Mario Edwards Jr. The Bears muff Jamie Gillan's ensuing punt, but manage to retain possession at their own 19-yard line.

10:13: The Browns' pass rush is heating up... Jeremiah Owusu-Koramoah and Myles Garrett both come up with sacks to force another punt, and after a penalty the Browns will go back to work from their own 23.

Some more bad news for the Bears: Star linebacker Khalil Mack is questionable to return after suffering a foot injury.

12:31 - Bears 3, Browns 3: Another promising Browns drive stalls after a holding penalty, but this time Kevin Stefanski elects to send Chase McLaughlin out for a 57-yard field goal attempt. Sure enough, McLaughlin nails it, and we're all tied up.

It's the longest Cleveland field goal since 1984, when Steve Cox made a 60-yarder against the Cincinnati Bengals.

2:54: Jadeveon Clowney does what the Browns signed him to do: blow plays up. His sack of Justin Fields ends the Bears' drive before it can even get started, and after a Pat O'Donnell punt and Demetric Felton return, the Browns will start on their own 23-yard line.

4:18: The Browns drive even deeper into Chicago territory, but are hit with a fourth-and-1 at the 20. Once again, Baker Mayfield is sacked (this time by Khalil Mack), and the Bears get the ball at their own 31.

8:40 - Bears 3, Browns 0: A long run by David Montgomery gets the Bears to Cleveland's side of the field, but rookie Jeremiah Owusu-Koramoah gets a nice stop on third down. Cairo Santos then makes a 47-yard field goal to give Chicago the early lead.

11:26: Odell Beckham Jr. gets his first catch and the Browns drive into Bears territory, but Baker Mayfield overthrows Demetric Felton on what would've been a touchdown. On fourth down, Mayfield is sacked by Robert Quinn and Angelo Blackson, and Chicago will take over on its own 47-yard line.

12:30 p.m.: For the first time this season, the Browns are wearing their special 75th anniversary uniforms. The drop shadow design on the numbers pays tribute to the 1946 AAFC championship team.

12 p.m.: As expected, Odell Beckham Jr. is active, as is left tackle Jedrick Wills Jr. With Jarvis Landry and linebacker Anthony Walker Jr. both on IR, the following players are inactive for the Browns:

9 a.m.: Browns fans were back out in the Muni Lot in full force today!!