Escaping with a win: Cleveland Browns hold off Jacksonville Jaguars 27-25, improve to 8-3 on season

Jarvis Landry had eight catches for 143 yards and a touchdown, while the running backs combined for another brilliant performance. 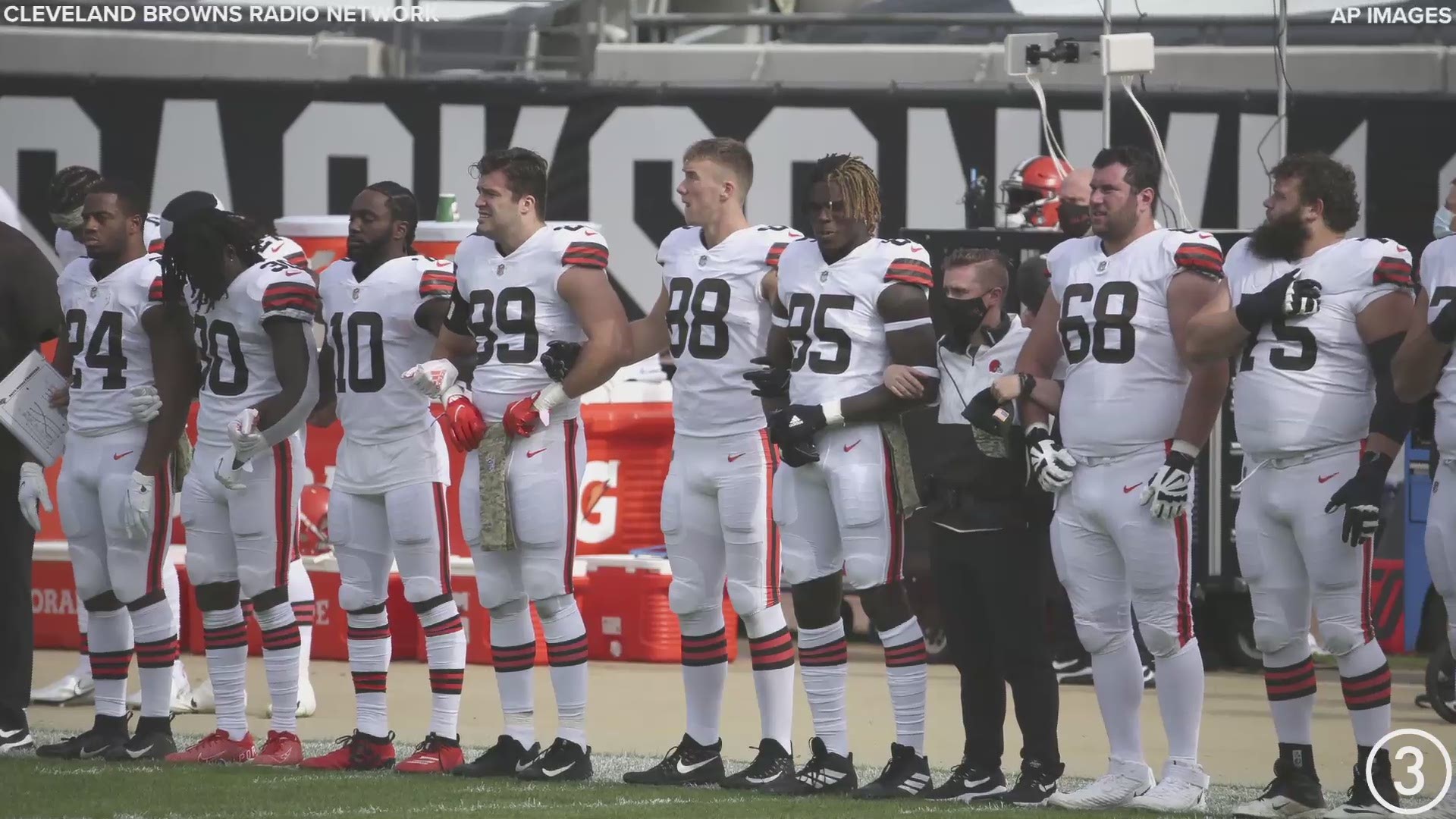 JACKSONVILLE, Fla. — They made it much harder than they needed to, but a win is a win, after all.

The Browns barely hung on Sunday to beat the lowly Jacksonville Jaguars 27-25. It was a sloppy game for both teams, but as has been the case, all year, the Cleveland running backs got the job done.

Nick Chubb and Kareem Hunt combined for 238 total yards and a touchdown, with Chubb in particular coming alive in the second half and delivering with a clutch catch and run on the final drive to ice away the final seconds. Adding to the offensive production, Jarvis Landry had his best game in a Browns uniform, catching eight passes for 143 yards and a score.

The Cleveland defense had its lulls, but did enough for the victory despite being without stars Myles Garrett and Denzel Ward, among others. The Jaguars had a chance to tie it late after a touchdown run by James Robinson, but quarterback Mike Glennon could not find an open receiver on the two-point conversion attempt.

At 8-3, the Browns have officially clinched their first non-losing season since 2007, and remain firmly in the AFC playoff race. It's the team's best start since 1994, which was also the year they won their last postseason game.

What follows is a drive-by-drive live recap of the action, with the most recent plays and updates closest to the top. Stay tuned for updates and analysis all day on 3News and WKYC.com.

0:00: Despite another ill-timed penalty (this time by JC Tretter), the Browns are able to run out the clock and preserve the win. Nick Chubb, per usual, provided the difference with an incredible catch-and-run on a third-down screen.

2:14: Aided by some costly Browns defensive lapses and a personal foul by Olivier Vernon, the Jaguars score on a 4-yard touchdown by James Robinson.

😤😤😤@Robinson_Jamess and the offensive line muscle in for the TD!

However, Mike Glennon's pass on the two-point conversion attempt is knocked away, and the Browns are still clinging to a 27-25 lead.

5:29: The Browns burn more than six minutes off the clock, but after Kareem Hunt is ruled to be down on 2nd-and-short, the running back drops a pass in 3rd-and-inches. Rather than kick a field goal, Hunt gets the ball on fourth down and barely fails to convert, and the Jaguars will take over at their own 22 needing a touchdown and a two-point conversion to tie it.

11:59: Two straight incompletions from Mike Glennon stall another Jaguars drive in Browns territory. Logan Cook is able to get off a perfectly placed punt, though, and Cleveland will start at its own 2.

14:13: The Browns running backs have officially awaken, as Nick Chubb and Kareem Hunt break off big runs to get down by the goal line. After a dropped pass in the end zone by Harrison Bryant is upheld upon further review, Chubb takes an option pitch from Baker Mayfield and scores a 1-yard touchdown. The Browns extend their lead to 27-19.

3:10: After getting into Browns territory, the Jaguars stall and are forced to punt. Donovan Peoples-Jones returns the kick to the Cleveland 10.

11:41: The Jags take advantage of the turnover, as a fourth-down conversion sets up a 2-yard touchdown pass from Mike Glennon to Tyler Eifert. Strangely, Jacksonville elected to go for two after an Browns offsides, and the game remains 19-17 after a failure to convert.

THAT CATCH 😮@tylereifert hauls it in for the TD‼

14:47: Baker Mayfield hits Harrison Bryant for a first down, but the rookie tight end fumbles, and Jacksonville's Andrew Wingard recovers it at the Cleveland 30-yard line. Former Browns Pro Bowler Joe Schobert was the one who knocked the ball loose.

No better way to start the half!

1:10: The Browns answer right back as Baker Mayfield caps off another nice drive with a 9-yard touchdown pass to Austin Hooper. Cleveland is back on top, 17-13.

4:14: Cleveland's defense collapses as Mike Glennon hits Collin Johnson in stride for a 46-yard touchdown. The Jaguars regain the lead, 13-10.

7:03: The Browns get another impressive drive, but Baker Mayfield shockingly misses a wide open Rashard Higgins in the end zone. Cleveland settles for a 24-yard Cody Parkey field goal, and now leads 10-6.

13:37: The Jags cut through the depleted Browns defense like a knife through butter, but in the end Cleveland gets a stop in the red zone. Aldrick Rosas' 24-yard field goal attempt is good, and Jacksonville cuts the lead to 7-6.

3:40: A 43-yard kickoff return by D'Ernest Johnson sets the tone for a quick Browns drive that ends with a 5-yard Baker Mayfield touchdown pass to Jarvis Landry. It's "Juice's" first scoring grab of the year, and Cleveland is on top 7-3.

Some bad news for the Browns, however, as safety Ronnie Harrison will not return after hurting his shoulder on the opening series. He is the third member of an already-suspect secondary to be sidelined with an injury.

6:35: Although the offense didn't go that far, the good starting field position allowed Aldrick Rosas to nail a 53-yard field goal, and the Jaguars take an early 3-0 lead.

9:46: The Browns' offense goes backwards thanks to a Dawuane Smoot sack of Baker Mayfield. Although Kareem Hunt is able to get the ball back to the 9-yard line, Jamie Gillan still has to punt, and Trey Quinn returns the kick to midfield.

12:05: Jacksonville gets an early first down, but the Browns' defense takes advantage of a couple of Jags mistakes and forces a punt. Logan Cook's kick is fair-caught at the Cleveland 8-yard line, where Baker Mayfield will lead the Browns out for their first drive of the day.