The Browns go into the bye week with a record of 5-3. 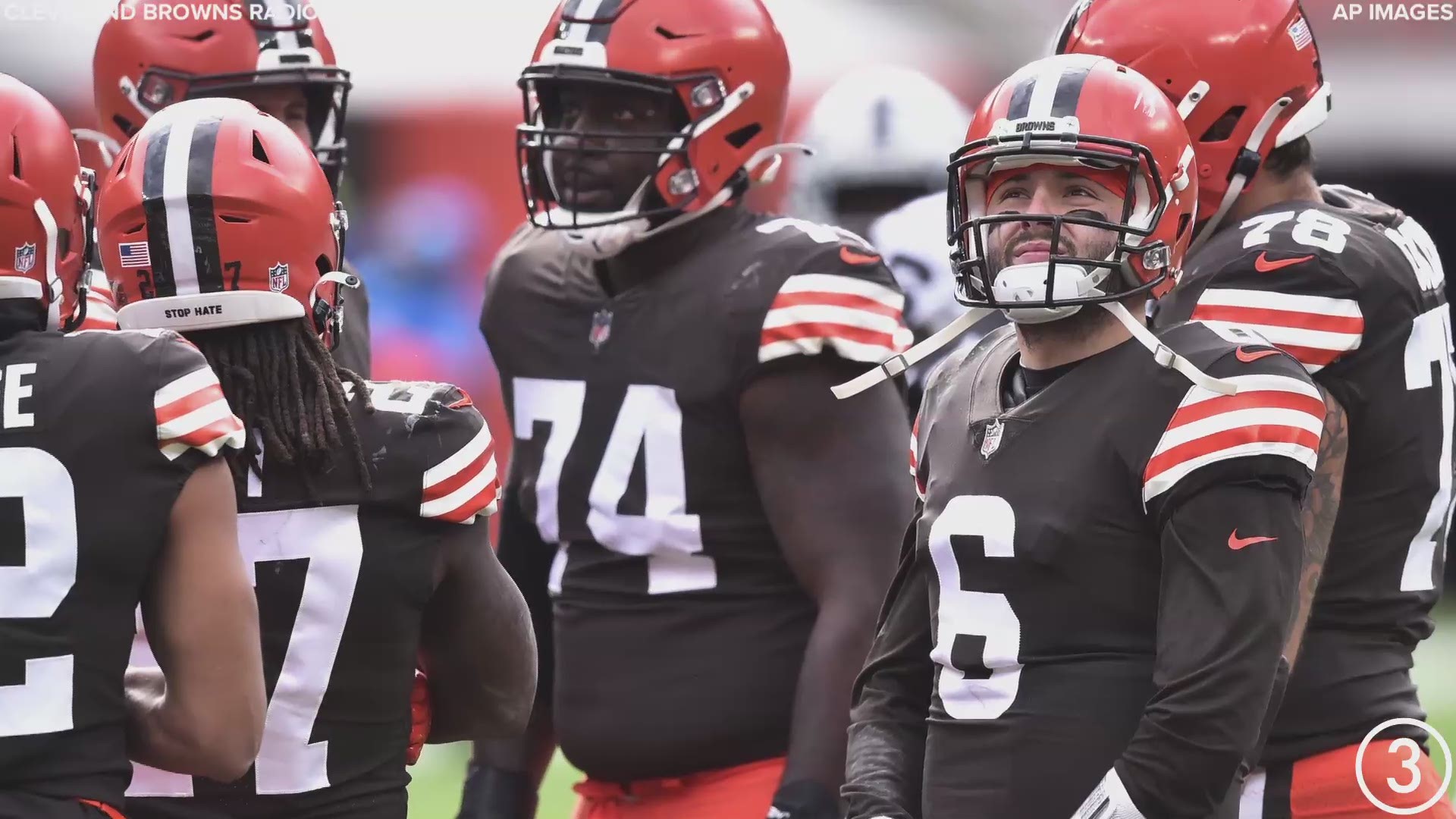 CLEVELAND — Talk about an emotional letdown.

The Browns lost to the Las Vegas Raiders 16-6 Sunday in a game plagued by sloppy play and bad weather. As emotionally satisfying as last week's victory over the Cincinnati Bengals was, this effort could only be described as cold and flat.

The Cleveland defense was unable to stop the Vegas running game, with burned precious minutes off the clock by picking up more than 200 total yards. The Browns offense didn't do much better, with Jarvis Landry and David Njoku dropping crucial passes and Harrison Bryant coughing up a fumble on the first drive.

What follows is a drive-by-drive recap of today's action, with the most recent plays and updates towards the top. 3News will have more analysis throughout the day on air and on WKYC.com:

1:54: The Browns drive into position to perhaps cut into the league, but the wind blows Cody Parkey's 37-yard field goal attempt wide left, and the Raiders will take over at their own 20 looking to run out the clock.

4:24: The Browns defense is helpless to stop the Raiders' rushing attack, but Vegas fails to punch it in at the goal line. Still, Daniel Carlson makes a 24-yard field goal, and it's a 16-6 ballgame.

13:11: Baker Mayfield finds a wide-open David Njoku, but he drops it, and the Browns are forced to punt. The Raiders will start at their own 20 after Jamie Gillan's kick just goes into the end zone.

14:53: The Raiders take the lead on a 4-yard touchdown catch by Hunter Renfrow that stands after a replay review. 13-6 Vegas.

8:47: A touchdown catch by Jarvis Landry is taken off the board upon further review, but Cody Parkey converts on a 38-yard field goal attempt. We're tied up again at 6.

Landry did have a great tip-toeing catch and run to get the Browns in field goal range.

0:00: The Raiders get another methodical drive to set up another Daniel Carlson field goal, this time from 33 yards out. Vegas leads 6-3 at halftime.

4:02: The Browns go three-and-out as the snow starts to fall at FirstEnergy Stadium. The Raiders will take over on their own 34 after an impressive punt by Jamie Gillan.

5:17: The Raiders get multiple 3rd and 4th down conversions and drive deep into Browns territory, but a possible touchdown catch by Henry Ruggs is ruled barely out of bounds and the call stands upon further review. Daniel Carlson's 29-yard field attempt is good, and we're tied up at 3.

13:35: Jarvis Landry drops a pass and Baker Mayfield almost throws a pick, but Cody Parkey is able to convert a 41-yard field goal despite the wind. The Browns strike first and lead 3-0.

6:27: The Raiders fail to take advantage of the turnover and go three-and-out after Olivier Vernon sacks Derek Carr. A.J. Cole punts to the Cleveland 18, where the Browns will start their next drive.

8:38: The Browns appear to be driving, but Harrison Bryant promptly fumbles after catching a dump-off pass from Baker Mayfield. Nicholas Morrow recovers it for the Raiders, who will take over on their own 27-yard line.

10:34: Penalties and short passes get the Raiders into Browns territory, but Daniel Carlson's 41-yard field goal attempt is whipped wide left by the strong wind. Cleveland takes over at its own 23.

This will be the Browns' first game without the services of Odell Beckham Jr., who tore his ACL last week in Cincinnati. However, there's a chance the star receiver may have put on a Cleveland uniform for the last time, with Ian Rapoport of NFL Network reporting there is a "real possibility" the team could trade him by next season.

Credit: AP
Cleveland Browns' Odell Beckham Jr. (13) is helped off the field during the first half of an NFL football game against the Cincinnati Bengals, Sunday, Oct. 25, 2020, in Cincinnati. (AP Photo/Michael Conroy)

Weather will also be a factor this afternoon, with Northeast Ohio potentially getting its first snow of the season.