At 9-3, Cleveland has clinched its first winning record since 2007. 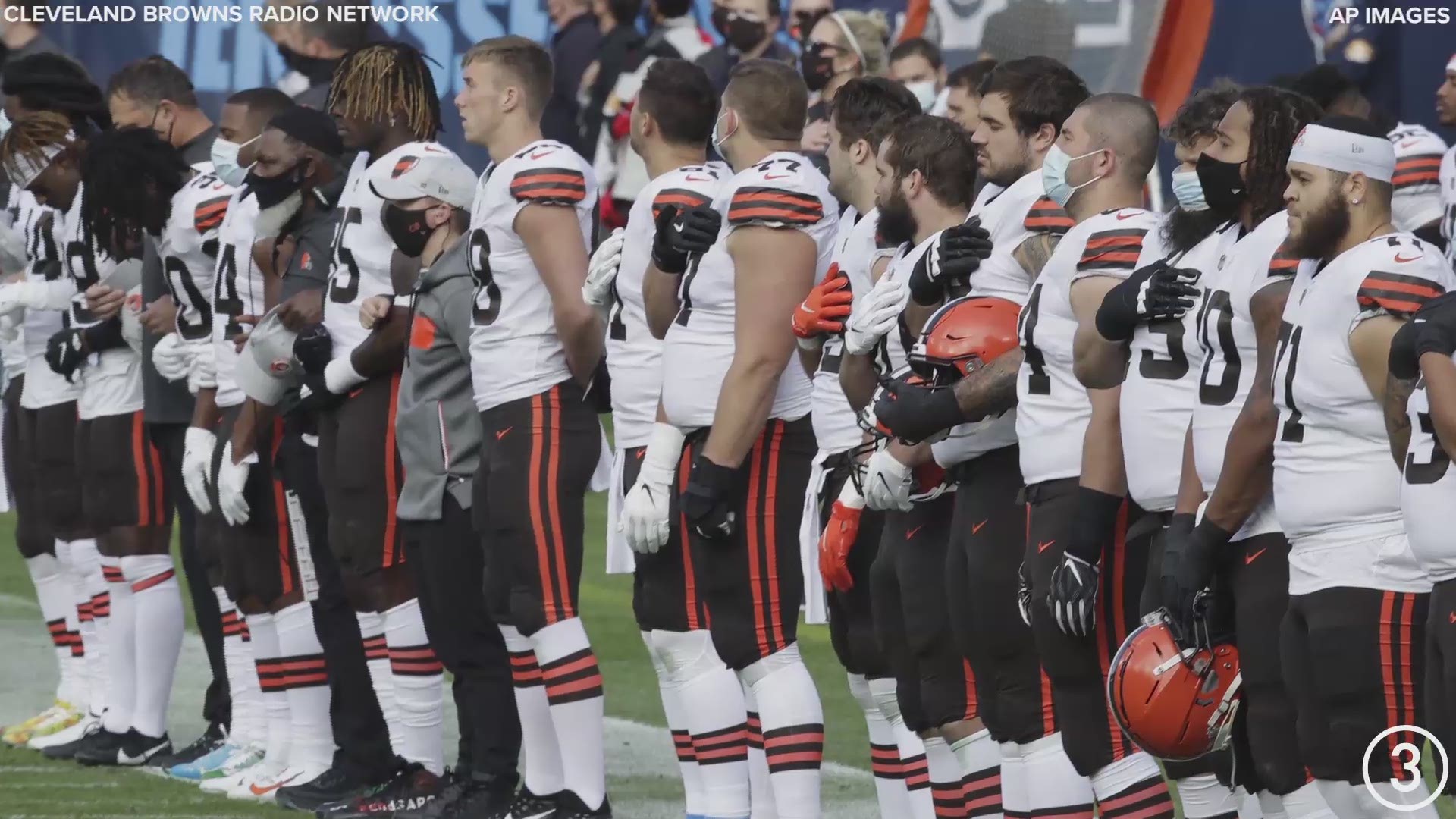 NASHVILLE, Tenn. — It's not hyperbole to call this perhaps the greatest Browns performance since the team returned in 1999.

The Browns rolled into Nashville Sunday and dominated the Tennessee Titans 41-35, staking their claim as a legitimate contender in the AFC. Baker Mayfield was brilliant, passing for 334 yards and four touchdowns in arguably his best game as a pro.

Cleveland led by 38-7 at halftime, and the defense withstood a furious second-half comeback by the Titans to preserve the crucial victory. M.J. Stewart Jr. had a big third-quarter interception, and Myles Garrett had a sack in his return from the reserve/COVID-19 list.

Now that the Cleveland Browns are 9-3, are you excited about the team?

What follows is a drive-by-drive recap of today's action, with the most recent plays and updates closest to the top. Stay tuned for updates throughout the day on 3News and WKYC.com.

0:28: Cameron Naton catches an 8-yard touchdown pass on 4th down to make it a 41-35 game, but Andy Janovich prevents disaster by recovering the onside kick. The Browns will kneel on the ball and get out of Nashville with a huge win.

0:48: Baker Mayfield inexplicably fumbles the ball while trying to run the clock out and Kenny Vaccaro returns it all the way to the Browns 13. The Titans still have a chance, down 13.

1:23: The Titans drive 91 yards and Derrick Henry scores a 1-yard touchdown, but Tennessee can't recover the onside kick and the Browns will look to run the clock out up 41-28.

5:43: The Browns due yeoman's work of burning the clock, thanks to some nice runs Kareem Hunt. Jamie Gillan is forced to punt, but kicks it to the Titans 9-yard line, and Tennessee needs a virtual miracle to come from behind.

12:48: Welcome back, Myles Garrett: The star defensive end sacks Ryan Tannehill to force a Titans punt. The Browns will start at their own 20 after a block in the back penalty negates an impressive return by Donovan Peoples-Jones.

Some bad news for Cleveland, as linebacker Mack Wilson is currently being evaluated for a concussion.

14:02: The Browns fail to take direct advantage of the big stop and go three-and-out, and Jamie Gillan punts the ball to the Tennessee 30. The Titans take over, but are running out of time for a comeback.

0:15: After allowing the Titans to march down the field and convert twice on fourth down, the Browns defense gets a huge play as M.J. Stewart Jr. intercepts a deflected pass and takes it back to the Cleveland 32.

5:29: Despite a third-down drop by Jarvis Landry, the Browns are able to burn some clock and stop the bleeding a little bit with a 43-yard Cody Parkey field goal. Cleveland extends its lead to 41-21.

9:08: The Titans get another quick score, but it was a little adventurous getting there: Terrance Mitchell stripped the ball out of A.J. Brown's hands at the goal line, but MyCole Pruitt was there to recover it and take it in for the touchdown. Ryan Tannehill adds the two-point conversion, and the Browns' lead is down to 38-21.

11:18: The Browns go three-and-out, and Jamie Gillan is forced to punt for the first time this afternoon. His kick goes just 39 yards, and the Titans will start with decent field position at their own 39.

13:52: Right out of the break, the Titans march downfield for a quick score as Ryan Tannehill finds MyCole Pruitt for a 22-yard touchdown. However, Derrick Henry is stuffed on the two-point conversion attempt, and the Browns still lead 38-13.

0:00: The Titans fail to score as the clock runs out, with Kevin Johnson recovering an A.J. Browns fumble. The Browns head into halftime with a commanding 38-7 lead.

0:55: Baker Mayfield helps orchestrate another methodical drive that ends with a 1-yard Nick Chubb touchdown. It's 38-7 Browns, who have set a record for the most first-half points in franchise history.

.@NickChubb21 DIVES into the end zone!

4:17: Another three-and-out for the Titans, who seem a bit shell-shocked down 24 points. The Browns take over at their own 35 after a punt.

5:46: Baker Mayfield is on fire as he throws for his fourth touchdown pass of the day, this time to Rashard Higgins from 17 yards out. It's now 31-7 Browns.

A thing of beauty 😍@bakermayfield finds @CALLME_WOOD for the touchdown!

Mayfield is also the first Cleveland quarterback since Otto Graham in 1951 to throw for four scores in the first half. Coincidentally, today would've been Graham's 99th birthday.

11:24: The Browns defense responds with a three-and-out, forcing the first punt of the day for either team. Cleveland will start on its own 20 after a holding penalty on the return.

13:04: All it took was one play: Baker Mayfield hits Donovan Peoples-Jones in stride, and the rookie from Michigan dashes for the score. The Browns extend their lead to 24-7.

13:14: The Titans answer right back as Ryan Tannehill finds Corey Davis for a 17-yard touchdown. The Browns still lead 17-7.

CD with the HANDS! @TheCDavis84

14:56: A little more trickeration from the Browns as Baker Mayfield hits offensive lineman Kendall Lamm (you read that right) for a 1-yard touchdown. Cleveland is rolling, up 17-0.

3:09: You'd be hard-pressed to script a better start for the Browns, as Sheldon Richardson forces a Derrick Henry fumble and Karl Joseph recovers it. Cleveland takes over at the Titans 21-yard line.

Richardson knocks it out and Joseph jumps on it!

3:19: Jarvis Landry is the star of this Browns drive, first using his arm to hit Baker Mayfield for a first down.

He later returns the favor by catching a short scoring pass from Mayfield, and Cleveland now leads it 10-0.

.@bakermayfield finds @God_Son80 in the back of the end zone for SIX!

7:51: On 4th-and-1 from the Cleveland 42, Mike Vrabel elects to go for it. However, Derrick Henry is stopped just short of the marker (a play upheld upon further review), and the Browns take over on downs.