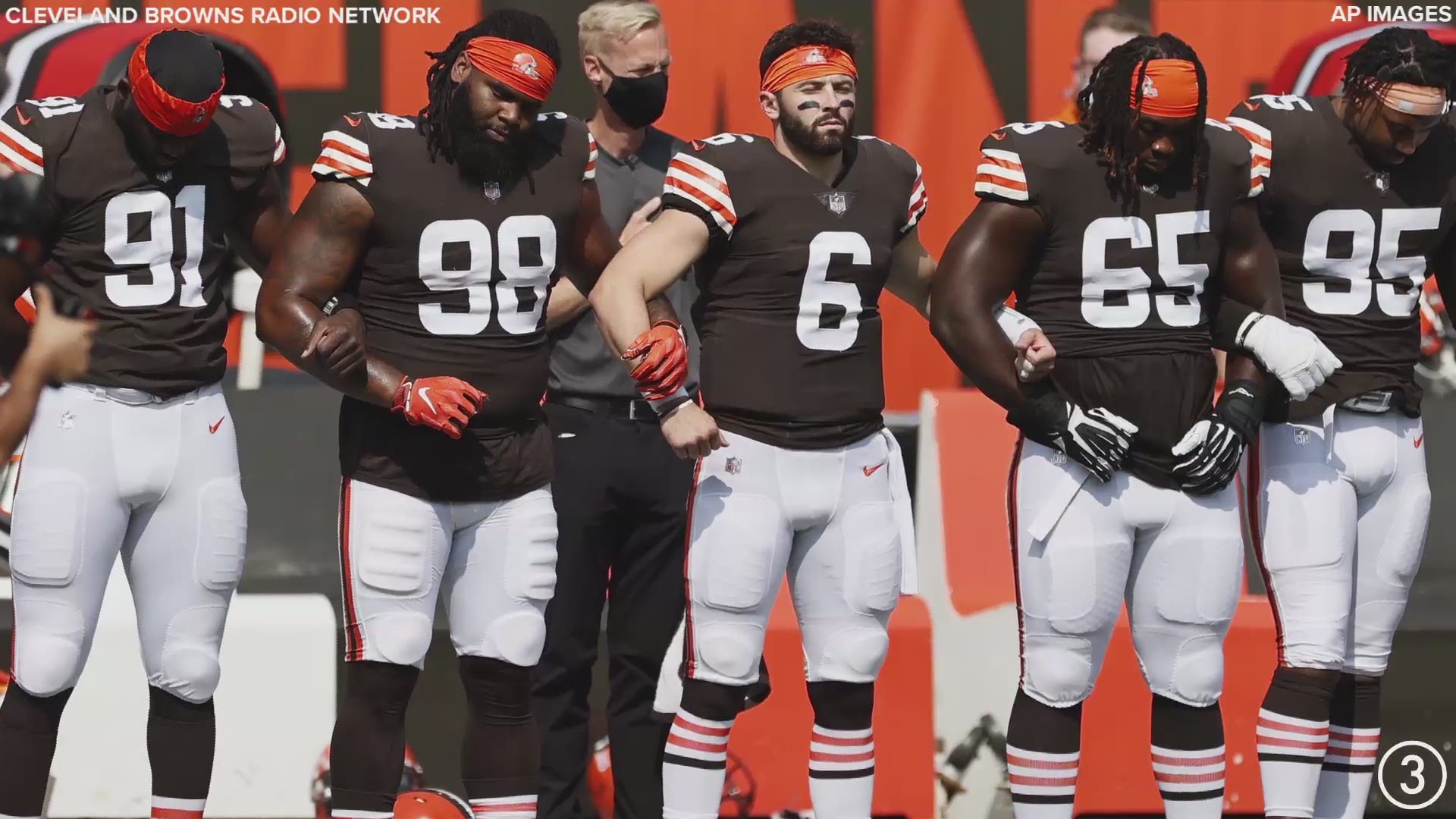 The Browns took down the Washington Football Team Sunday afternoon 34-20, overcoming a three-point fourth quarter deficit thanks to a strong running game and an opportunistic defense that came up with big plays when needed. Washington turned the ball over five times (including three interceptions), and Cleveland came up with 24 points off those takeaways.

Nick Chubb was brilliant again with 108 yards and two touchdowns, while Baker Mayfield did more than enough with two scoring passes. Myles Garrett added two sacks, including a strip and recovery of Washington quarterback Dwayne Haskins.

What follows is a drive-by-drive recap of today's action, with the most recent news and plays at the top. We'll have updates and analysis all day on 3News and WKYC.com:

1:10: The superb running game helps the Browns burn more than five minutes off the clock and set up a 30-yard Cody Parkey field goal. Cleveland extends its lead to 34-20.

6:30: Washington commits its fifth turnover as Myles Garrett strips and recovers the football from Dwayne Haskins. The Browns get possession again on the Washington 41-yard line.

8:40: The Browns now have 21 points off four Washington turnovers as Nick Chubb runs it in for a 20-yard touchdown. He's heating up, and Cleveland leads 31-20.

10:08: Dwayne Haskins is picked off for the third time today as B.J. Goodson gets in on the action. Browns ball at the Washington 35.

11:14: The Browns regain the lead on a 3-yard touchdown catch by Harrison Bryant, the first of his NFL career. Cleveland is back on top 24-20.

2:20: Dontrelle Inman catches his second touchdown of the day, and the Browns now trail Washington 20-17.

7:28: The Browns punt again after a Montez Sweat sack of Baker Mayfield leads to a three and out. Washington gets the ball on its own 46-yard line.

9:05: Multiple good screen passes from Dwayne Haskins set up a 2-yard touchdown run by Antonio Gibson. However, the extra point attempt is wide right, and Washington still trails the Browns 17-13.

11:27: An intentional grounding penalty by Baker Mayfield pushes the Browns back to within their own 10 and leads to a punt. Jamie Gillan sends a booming kick, but a nice return will give Washington the ball at the Cleveland 49.

12:58: Sheldon Richardson comes up with a sack of Dwayne Haskins to force a Tress Way punt. The Browns take over at their own 15.

0:32: Once again, the turnover leads to a Browns touchdown, as Kareem Hunt catches the pass from Baker Mayfield and takes it in from 9 yards out. Cleveland leads 17-7 with halftime approaching.

1:55: Another Dwayne Haskins interception, this time by linebacker Malcolm Smith. The Browns start at the Washington 24 looking to extend their lead.

2:48: Kareem Hunt is stopped on 3rd-and-short and the Browns are forced to punt again. Washington will start at its own 17 trying to tie things up or take the lead.

4:27: The Browns defense steps up again, with Myles Garrett coming up with a sack of Dwayne Haskins. Cleveland will take over at their own 26.

7:24: Karl Joseph intercepts Dwayne Haskins deep in Browns territory and breaks off a nice return. He fumbles near the end but Cleveland recovers, and will start on the Washington 28 looking to take the lead.

Karl Joseph with the takeaway‼️

(aaaand s/o to @TavierreT on the recovery 😳)

More bad news for Washington: Defensive end and Ohio State legend Chase Young has injured his groin & will not return.

10:46: The Browns convert a fourth-down pass to Austin Hooper, but the drive again stalls at the Washington 25. Cody Parkey's 42-yard field goal attempt is good, and Cleveland now trails 7-3.

1:44: Washington strikes first on a 17-yard touchdown pass from Dwayne Haskins to Dontrelle Inman. It's a 7-0 ballgame, although the kickoff will take place from the 20-yard line after a taunting penalty.

5:08: Following a nice first-down throw to Odell Beckham Jr., Baker Mayfield is sacked by Jonathan Allen. Jamie Gillan punts again, & Washington will start at its own 25.

9:05: A late hit by Denzel Ward almost hurt the Browns, but Washington is stopped at midfield. Cleveland takes over at its own 18 after a Tress Way punt.

11:43: Baker Mayfield threw some nice passes to Jarvis Landry and Austin Hooper, but a penalty led to the drive stalling just past midfield. Washington will take over at its own 8 following a Jamie Gillan punt.

Both Mack Wilson and cornerback Denzel Ward are active today, while Rashard Higgins is listed as a healthy scratch. "Hollywood" has made just one catch for 9 yards so far this season.