Finally. Cleveland Browns get back into win column with 19-16 victory over Buffalo Bills

After more than a month of waiting, the Cleveland Browns got back into the win column with a 19-16 victory over the Buffalo Bills at FirstEnergy Stadium Sunday. 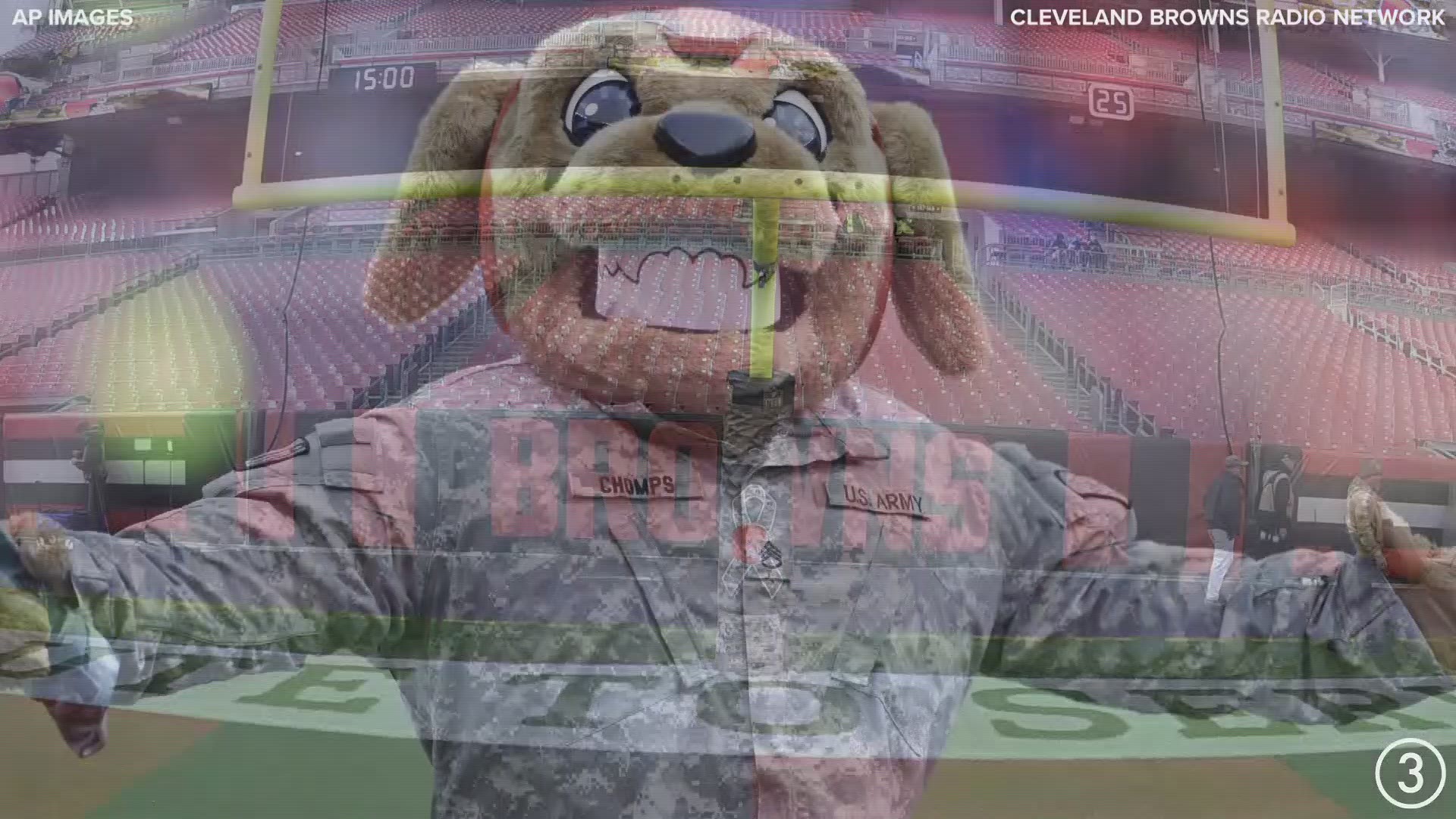 After more than a month since last tasting victory, the Cleveland Browns can put one in the win column.

Thanks to a missed 53-yard field goal attempt from kicker Steven Hauschka, the Browns fought their way to a 19-16 victory over the Buffalo Bills in front of the home fans at FirstEnergy Stadium in Cleveland Sunday afternoon.

The Browns’ win over the Bills (6-3) was their first at FirstEnergy Stadium this season, and improved their record to 3-6 in the regular season.

The Cleveland Browns’ coaching staff had been questioned about their usage of wide receiver Rashard “Hollywood” Higgins, and in his first extended action of the 2019 regular season, the veteran pass catcher delivered in the clutch.

With the Browns trailing the Buffalo Bills by four points late in the fourth quarter, the offense faced a second-and-goal from the Buffalo seven-yard line. Quarterback Baker Mayfield took the shotgun snap, stood strong in the pocket and fired a pass over the middle of the field for Higgins.

Higgins broke free on the post route right at the goal line, snuck behind Buffalo’s coverage and hauled in the go-ahead touchdown. Austin Seibert’s extra point gave the Browns a 19-16 lead over the Bills with 1:44 to play in regulation at FirstEnergy Stadium in Cleveland.

The Buffalo Bills had a touchdown taken off the scoreboard after an official review, but on the next play, they got the ball across the goal line for the go-ahead score against the Cleveland Browns at FirstEnergy Stadium in Cleveland.

On second-and-goal from inside the one-yard line, quarterback Josh Allen took the snap under center and followed his blockers up the middle of the field for his second rushing touchdown of the game and sixth of the season.

The ensuing extra point was good, and Buffalo took a 16-12 lead over the Browns with 5:25 to play in the fourth quarter.

After an inauspicious start to the second half by allowing a safety, the Cleveland Browns’ offense settled in and ended their second possession of the third quarter with a go-ahead score over the Buffalo Bills at FirstEnergy Stadium in Cleveland.

Rookie kicker Austin Seibert remained perfect on the season when he converted a 47-yard field goal to put the Browns back in front of the Bills, 12-9, with 3:49 to play in the third quarter.

The Browns’ scoring drive covered 56 yards in 10 plays, with the help of one defensive penalty for offsides, and took more than five minutes off of the game clock.

The Cleveland Browns forced the Buffalo Bills to punt the ball on the opening possession of the second half, but the ensuing drive did not last long for the home team at FirstEnergy Stadium in Cleveland.

On first-and-10 from the Cleveland eight-yard line, quarterback Baker Mayfield took a shotgun snap from center JC Tretter, but the window to pass the ball was closed, and as he went through his reads, the Bills’ defensive front closed ranks.

Linebacker Tremaine Edmunds hustled through a gap in the offensive line and brought down Mayfield for the safety.

The Bills’ defensive score drew them even with the Browns, 9-9, with 11 minutes remaining in the third quarter.

2:05 p.m./ET-Seibert puts Browns back in front of Bills

The Cleveland Browns had more troubles moving the ball in a goal-to-go situation on their third trip inside the red zone against the Buffalo Bills at FirstEnergy Stadium, but this time around, they did not leave points on the field after a false start penalty made it fourth-and-goal from the eight-yard line.

Rookie kicker Austin Seibert converted a 27-yard field goal attempt, which put the Browns back in front of the Bills, 9-7, with 3:35 to play in the first half.

The Browns covered 74 yards on 13 plays during the drive, including Baker Mayfield passes of 16 and 10 yards to wide receivers Odell Beckham Jr. and Jarvis Landry, respectively, along with 12 and 16-yard carries from running back Nick Chubb.

Second-year Buffalo Bills quarterback Josh Allen has the frame to be a pocket passer and the athleticism to scramble when necessary, and he put both on display on a scoring drive against the Cleveland Browns at FirstEnergy Stadium in Cleveland.

On second-and-eight from the Cleveland 10-yard line, Allen called his own number, ran a quarterback draw up the middle of the field and was not touched on his way into the end zone for his team-leading fifth rushing touchdown of the season.

With the extra point, the Bills took a 7-6 lead over the Browns with 10:09 to play in the second quarter.

The Bills covered 76 yards in nine plays and took nearly five minutes off the clock.

Earlier in the drive, Allen completed back-to-back throws for first downs, the first for 12 yards to tight end Dawson Knox and the second for 20 yards to wide receiver Robert Foster. In addition to the 10-yard run, Allen had a 12-yard scramble on the scoring possession.

The Cleveland Browns had eight snaps inside the Buffalo Bills’ two-yard line on their second drive of the game, but despite twice having the possession extended by pass interference penalties in the end zone on passes to wide receiver Odell Beckham Jr., the offense could not push the ball across the goal line.

The Browns were stopped for no gain or lost yardage on five carries from running back Nick Chubb, had one incompletion, a ball that was batted out of the hands of Beckham Jr. in the end zone, and turned over the ball on downs.

Despite the inability to capitalize on the good field position, the Browns maintained a 6-0 lead over the Bills with 3:13 to play in the first quarter at FirstEnergy Stadium in Cleveland.

The Cleveland Browns took the ball to start the game against the Buffalo Bills, and they marched right down the field and punctuated the opening possession with a touchdown.

On first-and-10 from the Buffalo 17-yard line, quarterback Baker Mayfield took the shotgun snap from newly-extended center JC Tretter, looked to the right of the formation and fired a pass into a tight window that wide receiver Jarvis Landry caught and maintained possession of the ball through the end of the play.

Although Landry made a tough catch, he celebrated a little too much and the officials wasted no time in trying to keep the game from getting out of hand, as the Pro Bowl wide receiver was flagged for unsportsmanlike conduct for taunting, which backed up the extra point try 10 yards.

That 10 yards proved to make a big difference, as rookie kicker Austin Seibert was off the mark with the attempt, which kept the score at 6-0 in favor of the Browns with 12:09 to play in the first quarter.

The Browns’ scoring drive covered 75 yards in six plays and took 2:51 off of the first-quarter clock.

11:40 a.m./ET-Callaway a healthy scratch for Browns

The Cleveland Browns deactivated wide receiver Antonio Callaway for today’s game against the Buffalo Bills at FirstEnergy Stadium in Cleveland.

It marks the first time this year that Callaway, who missed the first four games of the season because of a league-mandated suspension for a failed drug test, has been a healthy scratch for the Browns.

Both Vernon and Murray were listed as out on Friday’s injury report.

Vernon suffered a knee injury in last week’s 24-19 loss at the Denver Broncos while Murray is recovering from knee surgery. In addition to Vernon and Murray, the Browns ruled out Seals-Jones, who was helped off the field last Sunday when he was tackled with a shoulder pad to the kneecap.

Second-year lineman Chad Thomas is expected to start in place of Vernon at defensive end.

CLEVELAND -- The Cleveland Browns return to FirstEnergy Stadium in almost a month after a pair of road games and the annual bye-week break when they host the Buffalo Bills this afternoon, and the two teams are headed in opposite directions.

Currently, the Browns are 2-6 overall and four games in back of the Baltimore Ravens for first place in the AFC North Division after going on a four-game losing streak, with three of those losses coming on the road. The Browns are looking to start strong in the second half of the season, and they have three straight home games to make up some ground in the chase for a spot in the AFC Playoffs.

The Bills enter the game with a 6-2 record and find themselves in second place in the AFC East Division.

“We’ve got to win games, brother,” safety Damarious Randall said after Wednesday’s practice, his first on-field work since suffering a hamstring injury two weeks ago. “I don’t care where the game’s at. The game could be on the moon. It was unacceptable and we’ve got to start winning games.

“We’ve been overcoming adversity the whole, entire year. Guys have been banged up, beat up, so next man up and we’re just going to keep pushing.”

Although the Browns come into today’s game on the heels of four straight losses, the offense is due to get a boost in talent.

Pro Bowl running back Kareem Hunt is set to make his regular-season debut with the Browns after serving an eight-game suspension for off-the-field incidents, namely assaulting a woman at a Cleveland hotel/apartment complex in February of 2018.

After having football taken away from him for nearly a year, Hunt is “no doubt” ready to make an immediate impact on the field and help the Browns get back into the win column on the heels of a four-game losing streak that dropped the team to third place in the AFC North Division.

“Very eager, excited, can’t wait to get back out there on the field and help this team,” Hunt said following Thursday’s practice.

“Three-hundred forty-two days, 342 days and I’ve been counting down. I’m just excited. A lot of mixed emotions, high and low. It’s going to be a fun and emotional game, and I’m definitely excited to get back out there and do whatever I can, play a role and help this team win.”