Back in the saddle again: Cleveland Browns get bounce-back win over Cincinnati Bengals

One week after losing to the Pittsburgh Steelers, the Cleveland Browns got a 27-19 victory over the Cincinnati Bengals at FirstEnergy Stadium in Cleveland Sunday. 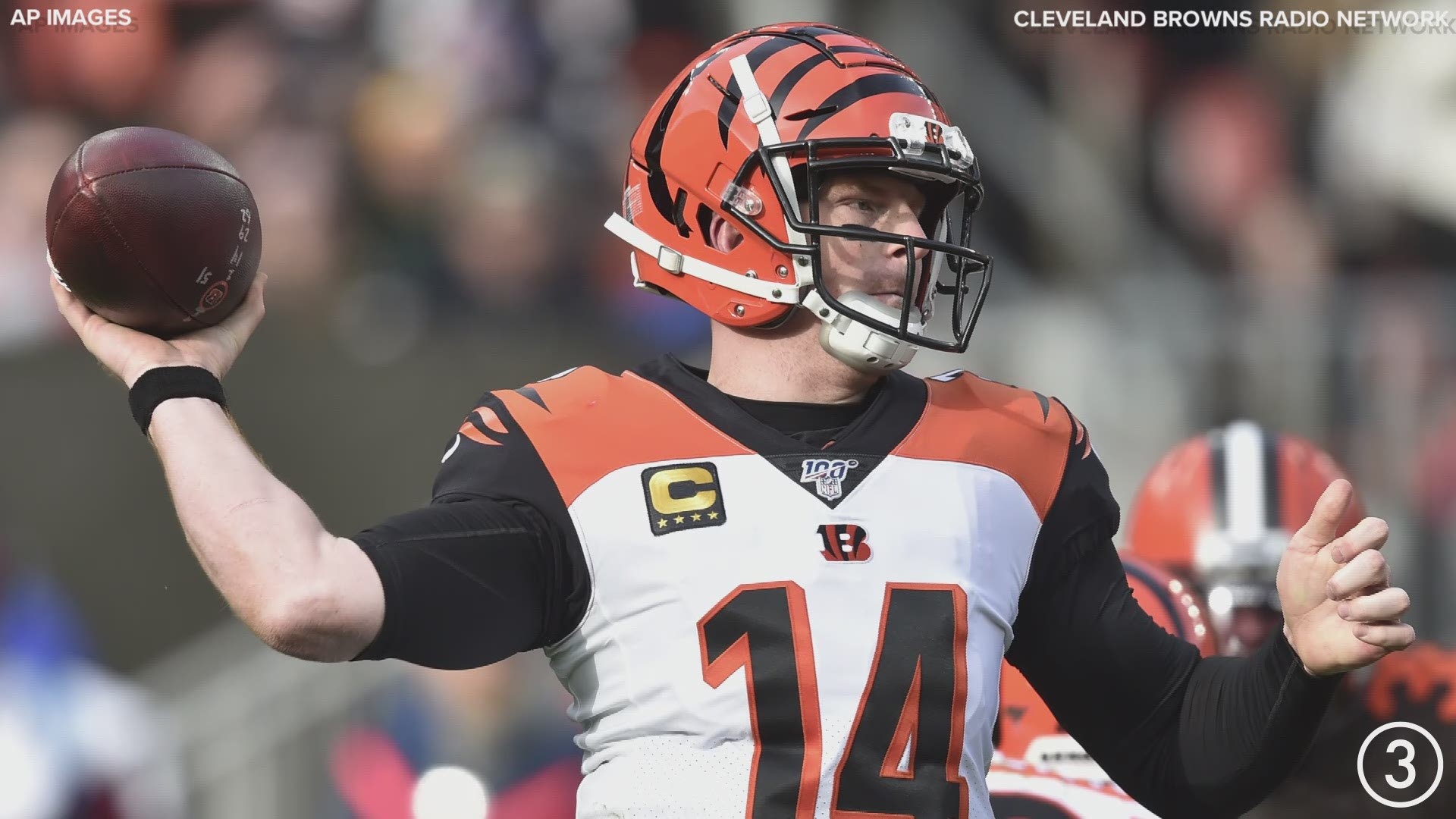 CLEVELAND — 4:16 p.m./ET-Browns bounce back from Steelers loss with win over Bengals

The Cleveland Browns had seven days to stew over last Sunday’s loss to the Pittsburgh Steelers at Heinz Field in Pittsburgh, and they took out that frustration in the second half of “The Battle of Ohio” matchup against the Cincinnati Bengals at FirstEnergy Stadium in Cleveland Sunday.

After a slow start for the running game, the Browns (6-7) got things going on the ground with the two-pronged attack from Kareem Hunt and Nick Chubb and rode that momentum to a 27-19 victory over the Bengals (1-12) in front of the home fans.

Quarterback Baker Mayfield completed 11 of his 24 attempts for 192 yards with no touchdowns and two interceptions, but while he struggled to move the ball through the air, the second-year signal-caller managed to rush for a touchdown in the first half.

After having just seven yards on three carries in the first half, Chubb finished the game with 106 yards on 15 attempts, thanks in large part to a 57-yard run up the middle that set up a three-yard rushing touchdown for Hunt.

Hunt accounted for 68 scrimmage yards (40 receiving, 28 rushing) and one touchdown against the Bengals.

The Arizona Cardinals are next up for the Browns, in what will be a showdown of former teammates at the University of Oklahoma in Mayfield and Kyler Murray, who won the last two Heisman Trophy awards after leading the Sooners to the College Football Playoff.

Kickoff for that game is 4:05 p.m./ET next Sunday at State Farm Stadium in Glendale, Arizona.

Following the cross-country road trip, the Browns will return to Cleveland for the home finale against the Baltimore Ravens (Sunday, December 22) and end the regular season by completing this year’s “Battle of Ohio” against the Bengals at Paul Brown Stadium in Cincinnati on Sunday, December 29.

Cleveland Browns rookie kicker Austin Seibert did not have to kick many long field goals during his collegiate career at the University of Oklahoma, and after struggling to find his range in training camp, practice and the preseason, he seems to have found it.

When the Browns’ offense stalled at the Cincinnati 35-yard line, Seibert was called upon to attempt a 53-yard field goal, which he hit almost right down the middle of the field for the longest successful conversion of his young NFL career.

Seibert’s kick capped off an eight-play, 40-yard drive and gave the Browns a 24-16 lead over the Cincinnati Bengals with 16 seconds remaining in the third quarter at FirstEnergy Stadium in Cleveland in the first edition of “The Battle of Ohio” in 2019.

Kicker Randy Bullock continues to chip away at the Cleveland Browns’ lead as the Cincinnati Bengals look for their second straight win after starting the year with 11 straight losses.

Bullock capped off a 16-play, 76-yard drive with his third successful field goal try, this one from 28 yards out, which cut down the Browns’ lead over the Bengals to five points, 21-16, with 4:39 to play in the third quarter of the first edition of “The Battle of Ohio” during the 2019 regular season.at FirstEnergy Stadium in Cleveland.

Cleveland Browns running back Nick Chubb had just seven yards on three carries in the first half against the Cincinnati Bengals at FirstEnergy Stadium in Cleveland Sunday, but the first drive of the second half was a much different story.

The Browns gave Chubb three carries on the six-play drive, and he responded by totaling 66 yards, 57 of which came on one run and set up a lead-extending three-yard touchdown run from fellow ball carrier Kareem Hunt.

Because of the run game productivity, the Browns extended their lead over the Bengals to 21-13 with 12:10 to play in the third quarter.

On first-and-10 from the Cleveland 40-yard line, Chubb took the handoff from quarterback Baker Mayfield, and despite Cincinnati getting an early jump on the play, a penalty that was declined, fought his way out of a tackle attempt in the backfield and broke free in the middle of the field.

Chubb was brought down at the Cincinnati three-yard line.

When a pass attempt to returning tight end David Njoku sailed out of bounds, the Browns went back to the ground game, and after taking a handoff from Mayfield, Hunt turned the corner around left tackle and hustled untouched into the end zone for the touchdown.

Cleveland Browns quarterback Baker Mayfield has struggled to complete passes in the red zone and find the end zone all season, but he took matters into his own hands, or in this case, feet, in the second quarter against the Cincinnati Bengals.

On third-and-goal from the Cincinnati seven-yard line, Mayfield scrambled around left tackle, leapt from the three-yard line and hit the pylon while somersaulting through the end zone for the touchdown, his third rushing score of the season.

Rookie kicker Austin Seibert followed the Mayfield touchdown run with a successful extra point try and gave the Browns a 14-13 lead over the Bengals with 6:37 to play in the first half of the first edition of “The Battle of Ohio” at FirstEnergy Stadium in Cleveland.

Out of the shotgun formation, Mayfield caught the snap and surveyed the field for an open receiver, but Cincinnati’s defense had the play well covered. Seeing that coverage, Mayfield stepped up in the pocket, quickly made the choice to run for the goal line himself, avoided a tackle attempt from Bengals linebacker Nick Vigil and broke the plane of the end zone for the score.

Running back Joe Mixon broke the Cincinnati Bengals’ touchdown drought against the Cleveland Browns early in the second quarter of the first meeting of “The Battle of Ohio” at FirstEnergy Stadium in Cleveland Sunday.

After the Bengals settled for field goals on two of their first three possessions, Mixon was able to push the ball across the goal line with a one-yard touchdown run, which gave Cincinnati a 13-7 lead over the Browns with 12:07 to play in the first half.

Cincinnati’s six-play, 57-yard scoring drive was set up by an interception from Browns quarterback Baker Mayfield, his second turnover of the game. Unlike the first interception of Mayfield, the Bengals made this one count when Mixon plowed through the Browns’ defense for the touchdown, his third rushing score of the season.

Kicker Randy Bullock converted a 44-yard field goal attempt and cut down the Cleveland Browns’ lead over the Cincinnati Bengals to a single point late in the first quarter of the first edition of “The Battle of Ohio” in the 2019 season.

Bullock’s second successful field goal attempt of the game trimmed the Browns’ lead over the Bengals to 7-6 with 1:37 to play in the first quarter at FirstEnergy Stadium in Cleveland.

The Bengals’ scoring drive covered 47 yards in seven plays and took nearly four minutes off of the first-quarter clock.

Cleveland Browns cornerback Denzel Ward showed a penchant for making plays on the ball and creating turnovers during his rookie season in 2018, so much so that he earned a Pro Bowl spot, but there was one thing missing: converting those takeaways into points.

That drought, however, came to an end in the first edition of “The Battle of Ohio” in 2019, as Ward took back a first-quarter interception of Bengals quarterback Andy Dalton all the way to the house for the “Pick Six.

Ward’s defensive touchdown, and the ensuing extra point from Austin Seibert, gave the Browns a 7-3 lead over the Bengals with 5:36 to play in the first quarter at FirstEnergy Stadium in Cleveland.

On third-and-23 from the Cincinnati 48-yard line, Dalton took the snap in the shotgun formation, looked right and overthrew wide receiver Tyler Boyd on a deep slant route. Ward was there to catch his first interception (and second takeaway) of the season, and the Northeast Ohio native hustled down the Cincinnati sideline untouched on the way to the end zone.

It did not take long for the Cincinnati Bengals to take a lead on the Cleveland Browns in the first edition of “The Battle of Ohio” in 2019.

After the Browns deferred their choice to the second half, the Bengals chose to take the ball to start the game and marched 59 yards down the field in eight plays and just over four minutes, and kicker Randy Bullock capped off the possession with a 34-yard field goal.

The Bengals moved the ball well early with chunk plays from wide receiver Tyler Boyd and running back Joe Mixon.

Boyd caught a pass from quarterback Andy Dalton on the first scrimmage play of the game and gained 21 yards. Not to be outdone, Mixon hustled around left tackle on the next play and scampered down the field for a 26-yard gain.

Dalton later found Boyd for a 14-yard gain to the Cleveland 13-yard line.

The Cleveland Browns had little time to sulk about missed opportunities in last Sunday’s 20-13 loss to the Pittsburgh Steelers at Heinz Field because there was another AFC North Division game on the horizon.

Following the loss to the Steelers, the Browns had to regroup quickly and go through their preparations for today’s game against the Cincinnati Bengals, who beat the New York Jets for their first victory of the season in Week 13.

“It’s very disappointing, but we ain’t got no choice now,” running back Kareem Hunt said. “We have to move on, look forward to next week’s game, get a win and get back on track.

“Honestly, the difference is the teams who want it done never get down on themselves. Bad things happen, and they just move forward. It isn’t always going to be pretty or perfect. It’s never going to be perfect, but as long as we executed and got the job done, that’s all that matters.”

The Browns’ playoff hopes took a huge hit with the loss to the Steelers, which dropped them to 5-7 on the season and two games in back of both Pittsburgh and the Tennessee Titans for the No. 6 seed in the AFC. Although the opportunity to win the AFC North Division is off the table, the Browns remain mathematically alive in the postseason race.

With only four games remaining in the 2019 regular season, the Browns know they can ill-afford another misstep and enter this week’s matchup with the Bengals well aware of what is at stake.

“We have to realize that no matter what other things are going on, on the outside, we have to have that singular focus,” quarterback Baker Mayfield said. “If we do want to make the playoffs, we have to buckle down and win each game from here on out. It is just plain and simple. We can’t have any slip ups and we have to win.”

Defensive back T.J. Carrie added, “We’ve got to win them all, man. You never know in this league. Winning takes care of a lot of things, though, a lot of ifs, buts and ands, so putting our best foot forward and winning them all is the biggest factor.”