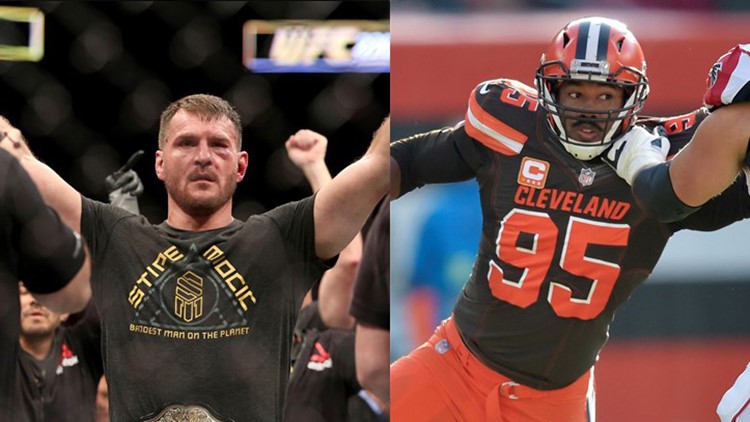 As a nod to Miocic regaining the UFC heavyweight championship with a fourth-round technical knockout victory over Daniel Cormier in the main event of UFC 241 at the Honda Center in Anaheim, California last Saturday night, Garrett did so prior to the Browns’ third preseason game Friday.

While walking into Raymond James Stadium in Tampa, Florida for the game against the Tampa Bay Buccaneers, Garrett donned a “Stipe Miocic” rematch t-shirt with the brief caption: “Baddest man on the planet.”

Donning a shirt while walking into the preseason game was just the latest show of support from Garrett toward Miocic.

While in Indianapolis for a Week 2 preseason game against the Indianapolis Colts at Lucas Oil Stadium, Garrett took a few seconds to send video well wishes to Miocic ahead of his heavyweight championship rematch with Cormier.

“Man, the time for talk is over,” Garrett said in the brief Twitter video. “Stipe vs. DC. Cleveland vs. The World.

Valley View Fire Department's congrats to Stipe Miocic: Rest up, you're on shift next week

Miocic made Garrett’s words prophetic with a stunning come-from-behind victory against Cormier.

Then, after a lead hook to the body, Miocic landed a straight right hand to Cormier’s chin. That wobbled Cormier and Miocic moved in for the finish. Miocic landed three right hands before connecting on three short lefts while putting Cormier against the cage.

It was the first time in Cormier’s career that he was knocked out in a heavyweight fight, and Miocic’s comeback victory earned him a $50,000 “Performance of the Night” bonus.

The record-holder for the most consecutive successful defenses of the UFC heavyweight championship, Miocic improved to 19-3-0 in his professional career with the victory over Cormier, including a 13-3 mark since joining the UFC in 2011.