Cleveland Browns wide receiver Odell Beckham Jr. is expected to miss the remainder of the 2020 season with a torn ACL. 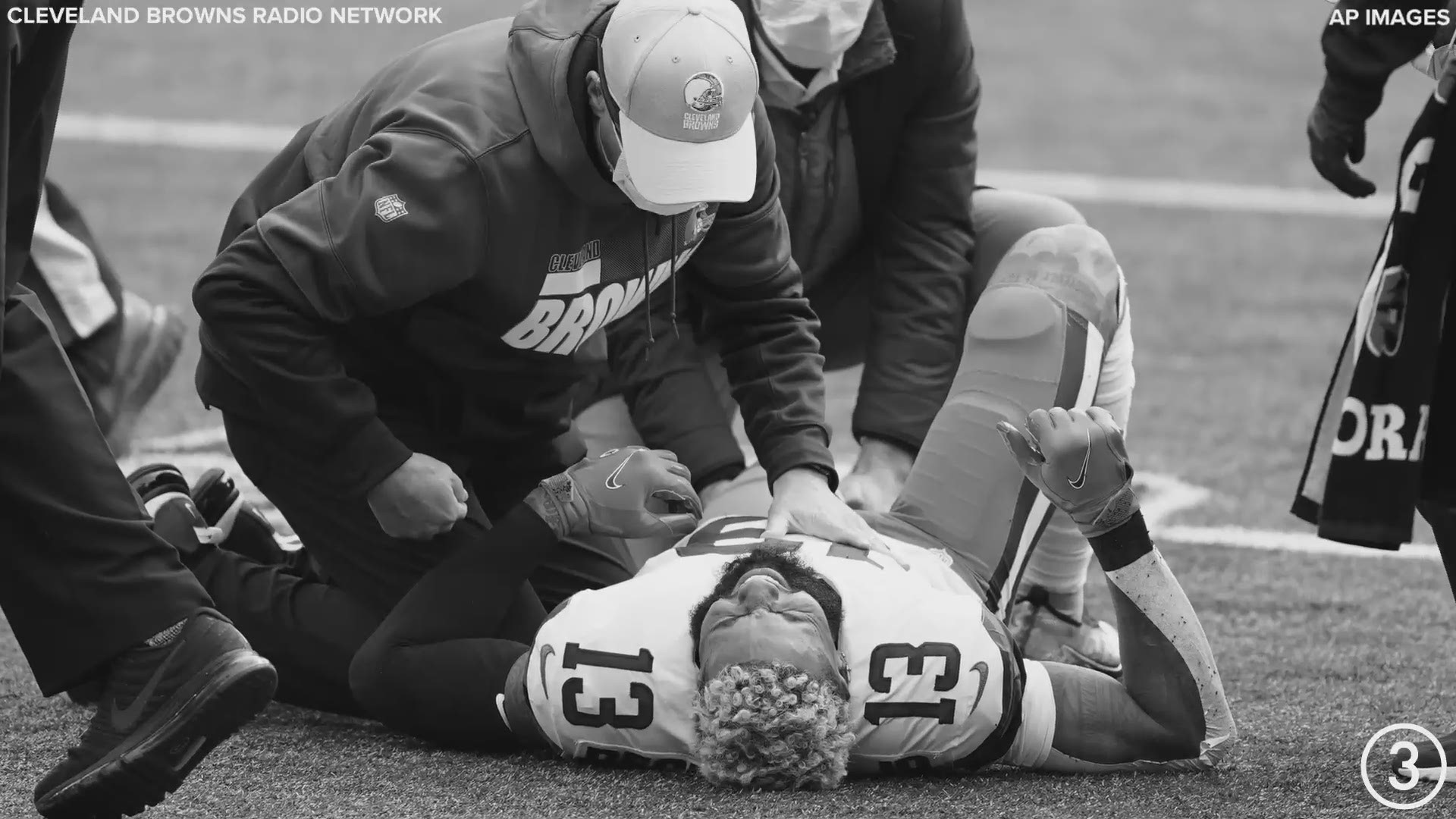 CLEVELAND — Knowing he has no other choice, Kevin Stefanski said the Cleveland Browns will have to move forward after Odell Beckham Jr. suffered a season-ending torn ACL on Sunday.

But the Browns head coach also knows that replacing a talent like Beckham's will be easier said than done.

While Beckham's production has been inconsistent, there's no denying he's one of the most talented wide receivers in the NFL. Without the 3-time Pro Bowl wideout in its lineup, Cleveland lacks a proven deep threat, potentially changing the way opposing defenses will defend Jarvis Landry, Rashard Higgins and the Browns' rushing attack.

“Obviously, it is a big loss. As everyone knows, he is a huge part of what we do," Stefanski said on Monday. "Now we will just have to huddle up and find some different ways and find some different people and put them in that role. Ultimately, we are just trying to do what our players do best. That is our job to figure that out."

As far as in-house options go, it seems likely that rookie Donovan Peoples-Jones will see an increased role, and perhaps not just in three-receiver sets. While Landry and Higgins are more possession receivers, Peoples-Jones possesses the speed to take the top off the defense, as well as a 6-foot-2, 212-pound frame the Cleveland receiving corps currently lacks.

Peoples-Jones' potential was on full display on Sunday, as he caught the game-winning 24-yard touchdown pass from Baker Mayfield in the Browns' 37-34 win over the Cincinnati Bengals. Referring to him as "Mr. Reliable," Stefanski didn't sound like he was going to shy away from giving the sixth-round rookie more playing time moving forward.

“Really proud of how he played," Stefanski said. "He can line up anywhere, a very intelligent player. To see him go make a play with the ball in the air was outstanding. There are going to be opportunities for him moving forward just like that."

After missing the previous four games with a hamstring injury, KhaDarel Hodge is also expected to return this Sunday when the Browns face the las Vegas Raiders. While hardly proven -- he has 9 career catches in three seasons -- Hodge has the type of speed (4.38 40-yard dash) that could prove even more valuable with Beckham sidelined.

"It is going to take multiple guys to replace these players," Stefanski said, noting the way the Browns have approached replacing Nick Chubb, who's been sidelined with a knee injury. "That is kind of the challenge that we have, and I think our guys will be up to the challenge."

The Browns also have a little more than a week left to make a trade before the Nov. 3 deadline, with a number of intriguing players existing as potential targets. Stefanski said that even without Beckham, he likes his roster's current receivers, but also noted that general manager Andrew Berry and his staff spend each week scouring the rest of the league for talent.

Ultimately, however, the reality remains that the Browns aren't going to be able to play the same way without Beckham as they did with him. Whether that means more reliance on running backs, even more tight end usage or players like Landry taking on a different role remains to be seen.

But regardless of how he chooses to go about it, Stefanski is confident his team will answer the call.

"It is such an unfortunate part of this business, but the guys understand that the show must go on," he said. "We have talked about guys stepping up in the past, and when their number is called, they are ready to play. I think you saw that yesterday. I think the guys understand what is at stake and that guys have to step up."