Modell failed to win enough votes to be part of the Hall's 'Centennial Slate' for the Class of 2020. 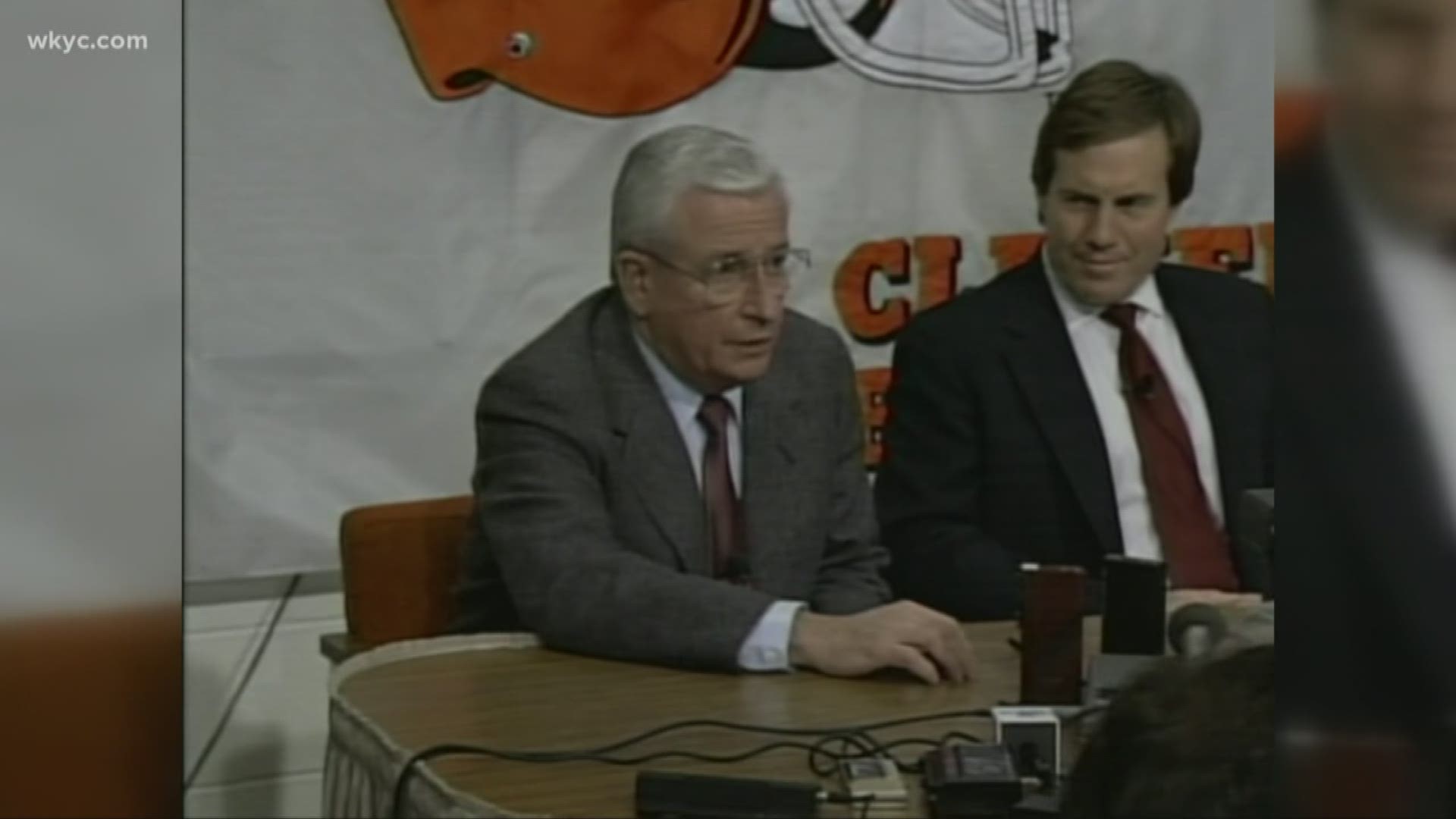 CLEVELAND — How hard of a pill to swallow would the following have been for Cleveland Browns fans?

The man who broke the hearts of millions by taking one of the NFL’s flagship franchises out of Cleveland and moving it to Baltimore 25 years ago, was once again in position to posthumously receive pro football’s ultimate honor.

The National Football League and the Pro Football Hall of Fame did an end around on Browns fans by coming up with a ‘Centennial Slate’ for the Class of 2020, featuring players, coaches and contributors who have not yet been elected to the Hall. The group was voted on by a ‘blue-ribbon panel’ of Hall of Famers, coaches, executives and historians.

Thankfully, in the eyes of the panel, Art Modell was not deemed worthy of inclusion.

Every time Modell’s name has come up for a vote, the Selection Committee has rejected him. He was a finalist in 2002 and 2013, but couldn’t crack the top 10 either time.

And don’t just blame my friend Tony Grossi for keeping Modell out of the Hall. The ESPN Cleveland analyst is the local representative on the Selection Committee and has made impassioned arguments against Modell’s candidacy on several occasions, but it’s not as if he’s been alone in his opinions.

When Modell missed out in 2013, several other voters were open about why Art didn’t deserve election. “In my opinion, moving the Browns kept him out once again,” said Mark Gaughan of the Buffalo News. “The fact that he ran into so many financial difficulties while owning two NFL teams was a negative against him as well, but the move was a very big factor.

“I personally have issues with an owner who will move his team in the name of needing money and a better deal, and then, he goes to Baltimore and needs to sell the team for money,” said Orlando Ledbetter, beat writer of the Atlanta Falcons. “The fans of Cleveland rightfully would’ve freaked out had he gotten in and I think that the right decision was made.”

Let’s put aside the ‘freak out’ factor for a minute and try to consider Modell’s credentials as fairly as we can. Yes, he deserves his due credit for his work as chairman of the NFL’s broadcast committee. Modell not only worked to shape the television contracts that made ‘The Shield’ the financial juggernaut that it is now, but he also helped launch ‘Monday Night Football.’ Yes, he deserves praise for volunteering to move the Browns into the AFC as part of the NFL-AFL merger.

None of this is in dispute.

That said, there are four reasons why Modell, or any NFL owner for that matter, forfeits his right for inclusion in the Pro Football Hall of Fame.

There’s no getting around those four sins. Think about it, the same person fired two of the greatest head coaches in NFL history. Paul Brown was the most innovative coach of his time and helped to modernize pro football. The Browns were the team of the 1950s in the NFL, playing in the championship game in five straight years, winning three of them.

Just two years after he bought the Browns, Modell decided he could not co-exist with the man who the franchise was named after. Paul Brown had to go.

One year after Brown was canned, the team he built would go on to win the 1964 NFL Championship.

Then in the summer of 1966, 29-year-old Browns running back Jim Brown was in England shooting the movie The Dirty Dozen. Like many big-budget productions, shooting fell behind schedule and Brown was stuck in the U.K. when training camp began.

Modell decided to play hardball with perhaps the greatest player in the history of the NFL. “No veteran Browns player has been granted or will be given permission to report late to our training camp at Hiram College — and this includes Jim Brown. Should Jim fail to report to Hiram at check-in time deadline, which is Sunday, July 17, then I will have no alternative to suspend him without pay. I recognize the complex problems of the motion picture business, having spent several years in the industry. However, in all fairness to everyone connected with the Browns — the coaching staff, the players and most important of all, our many faithful fans — I feel compelled to say that I will have to take such action should Jim be absent on July 17,” he said in a statement.

It got worse. Not only did Modell suspend Brown without pay, he fined him $100 for every day he didn’t show up to camp. That was too much for Brown to take. Here was his letter in response, written from the U.K.

I am writing to inform you that in the next few days I will be announcing my retirement from Football. This decision is final and is made only because of the future that I desire for myself, my family, and if not to sound corney my race. I am very sorry that I did not have the information to give you at some earlier date, for one of my great concerns was to try in every way to work things out so that I could play an additional year.

I was very sorry to see you make the statements that you did, because it was not a victory for you or I but for the newspaper men. Fortunately, I seem to have a little more faith in you than you have in me. I honestly like you and will be willing to help you in any way I can, but I feel you must realize that both of us are men and that my manhood is just as important to me as yours is to you.

It was indicated in the papers out of Cleveland that you tried to reach me by phone. Well, I hope you realize that when I am in my apartment I never refuse to answer my phone. The only reason that I did not contact you before I knew the completion date of the movie, is that the date was the one important factor. You must realize that your organization will make money and will remain successful whether I am there or not. The Cleveland Browns’ are an Institution that will stand for a long, long time.

I am taking on a few projects that are very interesting to me. I have many problems to solve at this time and I am sure you know a lot of them, so if we weigh the situation properly the ‘Browns’ have really nothing to lose, but Jim Brown has a lot to lose. I am taking it for granted that I have your understanding and best wishes, for in my public approach to this matter this will be the attitude that will prevail.

The business matters that we will have to work out we could do when I return to Cleveland. I will give you any assistance I can and hope your operation will be a success. You know the areas that I can be helpful and even if you do not, ask this help my attitude will be one that I will do only the things that will contribute to the success of the ‘Cleveland Browns.’ 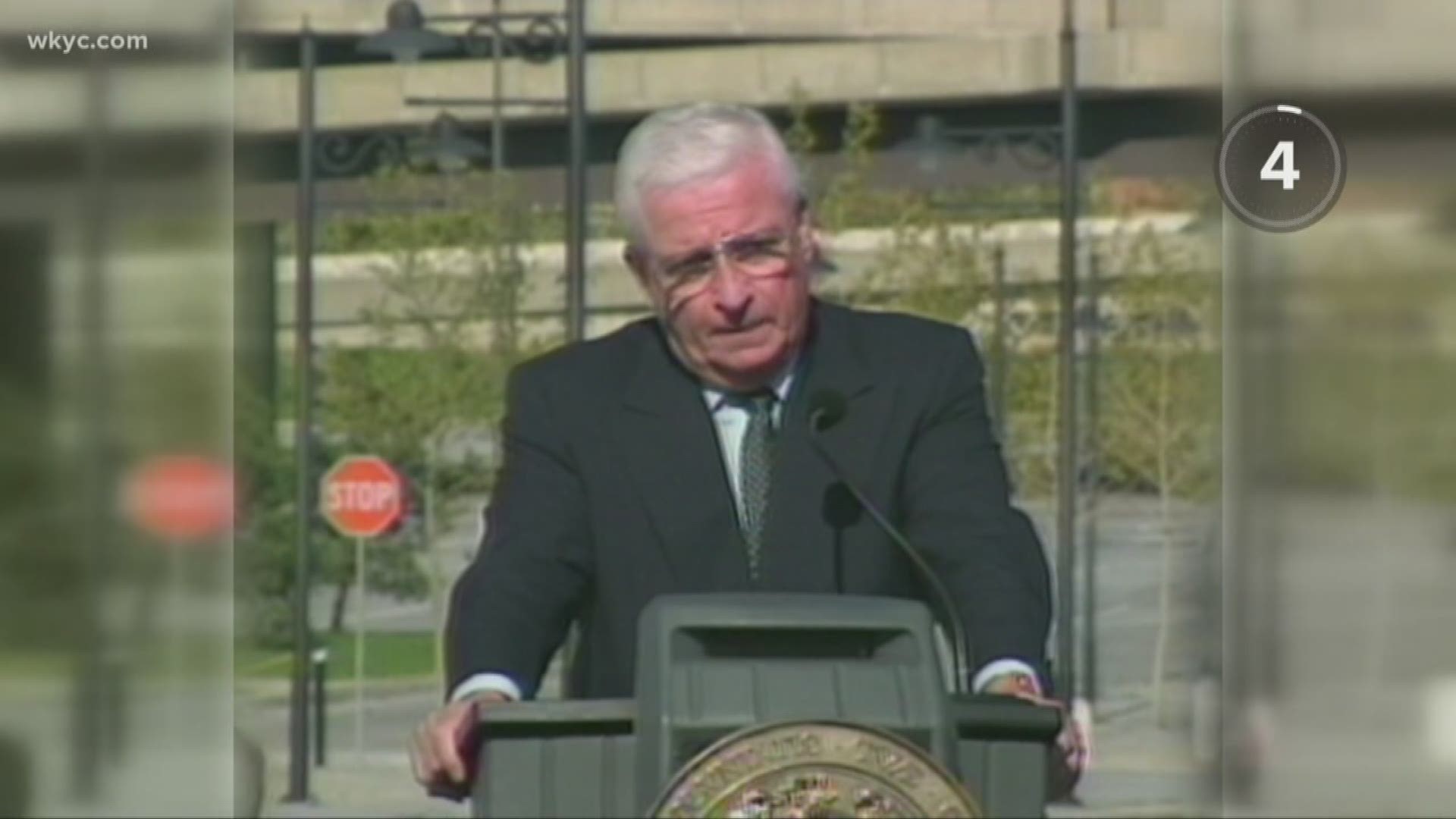 "I don't own oil wells or shopping malls like some owners," Modell liked to say during his time as an NFL owner. "Football is my only business."

Despite the millions of dollars in television revenues, despite the packed crowds that came to Cleveland Municipal Stadium, somehow Modell went broke in the business of pro football.

It was so bad that when the Browns went to sign free agent wide receiver Andre Rison in 1995, Modell had to get a $5 million loan for the signing bonus.

Why? As history showed, Art Modell had only himself to blame.

Modell decided to essentially become the landlord of the stadium in the 1970s, starting the Cleveland Stadium Corporation. Once his most important tenant, the Cleveland Indians, left for Jacobs Field in 1994, Modell was stuck.

But he didn’t have to be.

As my colleague Mark Naymik wrote for Cleveland.com a few years ago, Modell was asked to be a part of the Gateway project. City leaders had proposed building a third sports complex near the area that is now Progressive Field and Rocket Mortgage FieldHouse.

But Art said no thanks.

As the stadium deteriorated and NFL salaries escalated, Modell claimed to have lost $21 million between 1993 and 1994. He became desperate. Yet, he never really explained to the public how bad things were. In fact, during the fateful summer of 1995, Modell declared a ‘moratorium’ on discussing any matters relating to the Browns stadium issues.

He did so while at the same time sending trusted friend and future Browns owner Al Lerner to open negotiations with the city of Baltimore and the state of Maryland. By September, a deal was being drawn up between the two sides.

"I am imploring you to lay out specifically what you must have in order to stay in Cleveland so we can properly respond," then-Governor George Voinovich wrote in an October 1995 letter to Modell. "The fact that you have not been willing to lay it out publicly has given rise to the assumption, quite frankly on my part, that you have already decided to pick up stakes and move somewhere else."

Cuyahoga County put a sin tax extension on the November ballot that fall that would have paid for renovations to Cleveland Stadium. City, state, and county leaders were also pondering ways to help boost revenues for Modell as well.

It was too late. The decision to move had already been made.

Once the move was announced on November 6, the 1995 Browns never had a chance. They were 4-5 when Modell appeared on the dais in Baltimore, but would lose six of their last seven games to finish 5-11.

Surprisingly in February of 1996, Modell fired his head coach just a week after the move became official.

To me, this all makes his candidacy for the Hall null and void.

“The real reality of Cleveland being without their football team, the Cleveland Browns, was a scant four or five months, and then, the waiting period for the stadium to be built,” Art’s son David Modell said in the ESPN 30 for 30 film Believeland. “So in reality, the Cleveland Browns never moved. It paused for a period of time.

“I got the anger. Got it. Understand it. We all didn’t do all the right things. Got it. Got it all. But at the end of the day, what pound of flesh is necessary?”

Understand that since the move, the Baltimore Ravens have hoisted two Vince Lombardi trophies. The Browns have had two winning seasons and have played in one playoff game. The return of the franchise was clumsily mismanaged by the NFL, helping to set in motion 20 years of bad football with multiple owners, numerous general managers, a ton of head coaches, and a jersey full of horrible quarterbacks.

It didn’t have to happen. But it did.

And it should disqualify the person responsible from entering the Pro Football Hall of Fame.

WATCH | Jim Donovan and I talked more about Modell and the Hall of Fame during Wednesday's edition of Donovan & Dino:

RELATED: Will stability finally become part of the picture for the Cleveland Browns?: Bud Shaw’s You Said It