Despite not talking with the Cleveland Browns officially about their opening, New England Patriots offensive coordinator Josh McDaniels says "the book is closed" on interviews for 2019. 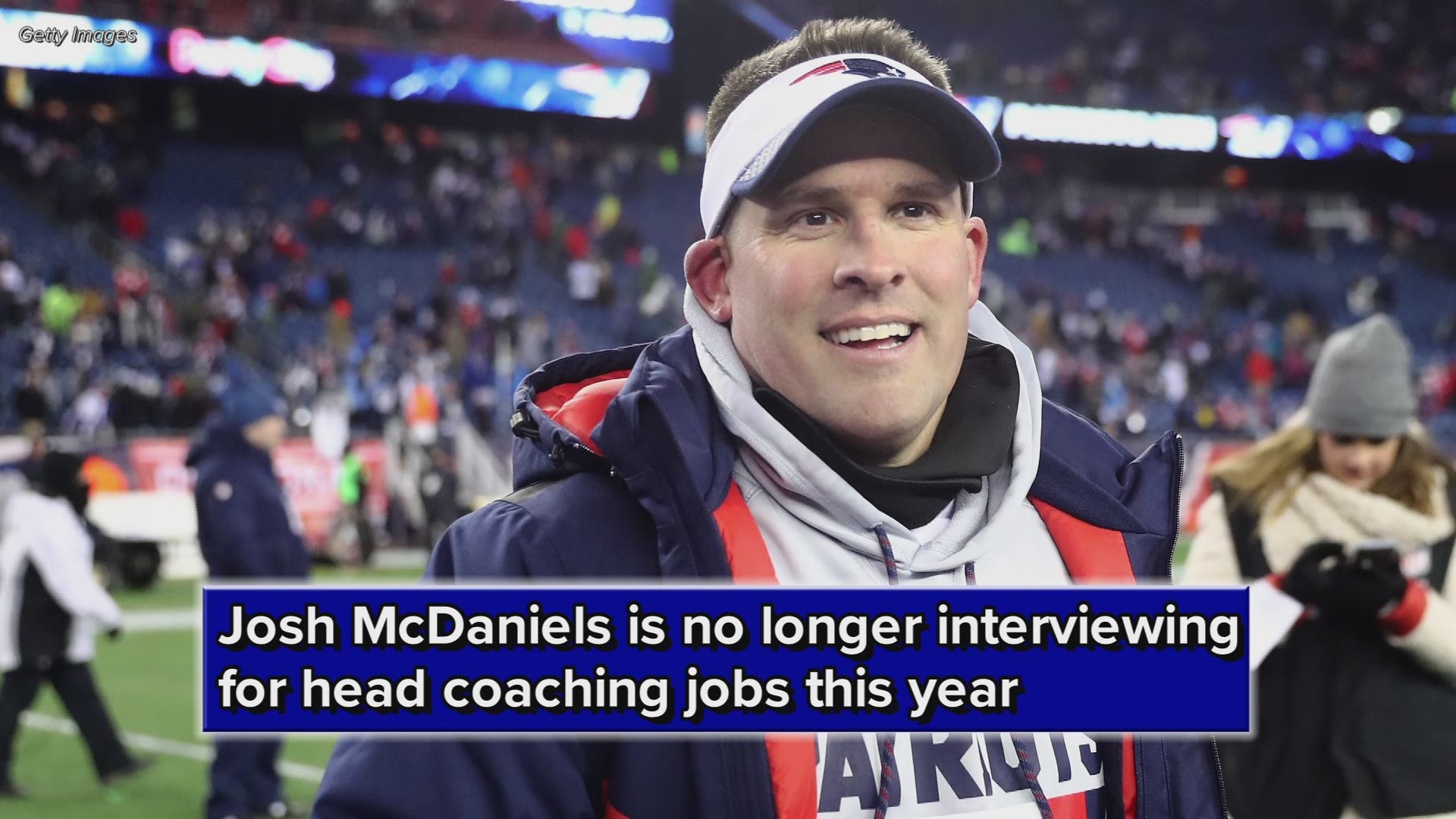 New England Patriots offensive coordinator Josh McDaniels reportedly had a high level of interest in the Cleveland Browns’ head-coaching vacancy, but it appears that potential move is no longer a possibility.

In a conference call with the media ahead of this week’s AFC Divisional Playoff game against the Los Angeles Chargers at Gillette Stadium in Foxborough, Massachusetts, McDaniels seemed to shut down the idea of him leaving the Patriots to join the Browns.

“The book is closed,” McDaniels said when asked about head-coaching interviews for 2019. “It’s always a humbling experience to have an opportunity to interview with anybody for that position, and I was thankful for the opportunity to meet with Green Bay.

“It always gives you greater insight into another organization and how they do things. It’s been very educational for me every time I’ve gone through it and I’ve appreciated every single one of them. That was great, but no, I’m completely focused on the Chargers and our season and finishing it strong and I’ll be here moving forward.”

McDaniels was considered a betting favorite to take over as Browns head coach and has ties to the Northeast Ohio community. McDaniels was born in the Akron suburb of Barberton and went to Canton McKinley High School, where he played for his father, Thom, a well-respected and very successful prep coach.

Last offseason, McDaniels agreed to become head coach of the Indianapolis Colts, only to walk away from the job the same day in order to return to the Patriots as offensive coordinator.

McDaniels remained well thought of in coaching circles and was a candidate whom several teams requested interviews with in the past despite a limited amount of success in two years as head coach of the Denver Broncos.

Although McDaniels had some success with the Broncos in his first season, his tenure was not without controversy.

McDaniels and the Broncos were fined $50,000 each and assistant Steve Scarnecchia was fired for illegally filming a San Francisco 49ers walk-through practice ahead of an NFL International Series game at Wembley Stadium in London.

After serving a graduate assistantship at Michigan State University in 1999, McDaniels joined the Patriots as a personnel assistant (2001) and moved on to defensive assistant (2002-2003) before being elevated to quarterbacks coach in 2004.

Ahead of the 2005 season, McDaniels was named offensive coordinator and quarterbacks coach for the Patriots, a position he held for four years before becoming coach of the Broncos.

During his time with the Patriots, McDaniels has been a part of five Super Bowl-winning teams.

Credit: Matt Florjancic
Cleveland Browns GM John Dorsey remains committed to keeping his options open in the coaching search despite Gregg Williams' success in the second half of the 2018 season.

Although the Browns never requested to talk with McDaniels about their opening, they have been thorough with the interview process.