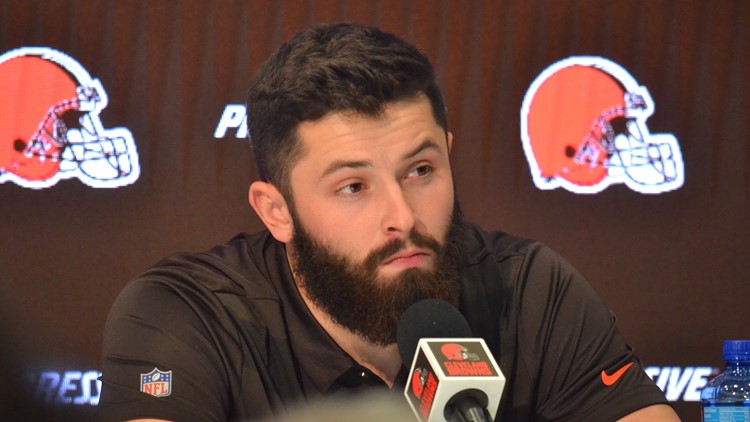 Photo by: Matt Florjancic
Cleveland Browns quarterback Baker Mayfield listens to a question during a press conference to kickoff the offseason program.

CLEVELAND — With quarterback Baker Mayfield emerging as the emotional and on-field leader for the Cleveland Browns during the 2018 season and the addition of wide receiver Odell Beckham Jr. in an offseason trade with the New York Giants, the eyes of the football world are on Northeast Ohio.

And the Browns better get used to that feeling because the 2019 schedule, which was released by the National Football League Wednesday night, is full of prime-time action, as half of their regular-season games start at 4:05 or later on the East Coast.

It is the first time the Browns have been featured in multiple prime-time games in the same season since 2015, when they battled the Cincinnati Bengals on the road on Thursday Night Football on November 5, and on November 30, hosted the Baltimore Ravens in a Week 12 Monday Night Football matchup.

Also, it is the first time the Browns will be featured on multiple Monday Night Football games in the same season since 2008. During that 2008 season, the Browns played three Monday games, beating both the New York Giants (October 13) and Buffalo Bills (November 17) before falling to the Philadelphia Eagles (December 15).

That kind of exposure does not come without better players joining the organization and making a difference under the guidance of general manager John Dorsey.

After taking over the first-team offense in the second quarter of a Week 3 win over the Jets, Mayfield completed 310 of his 486 attempts (63.8 percent) for 3,725 yards and 27 touchdowns against 14 interceptions.

Then, there is the acquisition of Beckham Jr.

Newly acquired wide receiver Odell Beckham Jr. is thankful for opportunity to play for the Cleveland Browns and ready to build his legacy.
Matt Florjancic

Beckham Jr. has put four 1,000-yard and three double-digit touchdown seasons on his resume since being selected with a first-round pick in the 2014 NFL Draft.