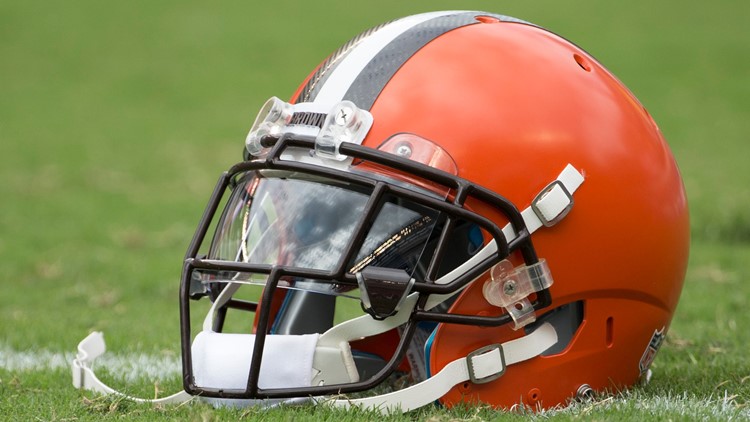 Photo by: Mitchell Leff
A Cleveland Browns helmet rests on the field prior to the game against the Philadelphia Eagles at Lincoln Financial Field in Philadelphia, Pennsylvania on September 11, 2016.

CLEVELAND — The Browns are reportedly wrapping up the search for their 18th head coach, and in the process have apparently begun checking on candidates for the also-open general manager position. Several names have been mentioned, but could it be an old face who eventually gets the latter job?

According to ESPN's Adam Schefter, the Browns have requested permission to interview Philadelphia Eagles Vice President of Football Operations Andrew Berry for the GM spot. The 32-year-old is in his first season in Southeast Pennsylvania after serving as Cleveland's VP of player personnel for three years.

A former All-Ivy League cornerback at Harvard, Berry got a job as a scouting assistant for the Indianapolis Colts right out of college as a scouting assistant before being promoted to pro scout in 2011. During his time there, the organization drafted future Pro Bowl quarterback Andrew Luck and made the playoffs three times, including a trip to the AFC Championship Game in 2014.

At the age of just 28, Berry was hired by then-Browns Executive VP and de facto-GM Sashi Brown to work in the team's front office. The addition of Berry was just a part of an analytics-heavy mindset Cleveland was going for at the time, and one of his top achievements during his tenure was his key role in the drafting of Larry Ogunjobi in the third round in 2017. The Charlotte product has since become a major player on the Browns' defensive line, tallying 50 tackles and 5.5 sacks in 2019.

However, the overall results on the field were a disaster, and Brown was fired in the middle of an 0-16 season in 2017. But even with the hiring of "football guy" John Dorsey as the team's new GM, Berry and other members of the analytics department like Paul DePodesta retained their jobs and reportedly remained in the good graces of owners Jimmy and Dee Haslam. Berry and the analytics crew also allegedly pushed for the hiring of Minnesota Vikings offensive coordinator Kevin Stefanski as the Browns' next head coach last January but were overruled by Dorsey, who went with Freddie Kitchens. Berry left for Philly shortly thereafter.

Now, Kitchens and Dorsey are both gone after a miserable 6-10 campaign, and Chief Strategy Officer Paul DePodesta is running the coaching search. Jimmy Haslam has said the team will hire a head coach first before bringing in a GM he can be in-sync with, and many speculate someone like Stefanski could pair well with someone like Berry.

WHO IS KEVIN STEFANSKI?: The Minnesota Vikings’ coordinator once again in mix for Browns coaching vacancy

Considered a "rising star" among league executives, Berry was part of the Eagles front office that helped the team win the NFC East division this season. The team also took offensive tackle Andre Dillard (first round) and running back Miles Sanders (second) in the NFL Draft, with the latter putting up 1,641 all-purpose yards and six total touchdowns during his rookie campaign.

In addition to Berry, Schefter and Seth Wickersham also report the Browns would like to interview Colts Assistant GM Ed Dodds for the top job. Dodds worked in Seattle with San Francisco 49ers defensive coordinator Robert Saleh, who was said to have earned rave reviews from his own interview for Cleveland's head coach.

New England Patriots offensive coordinator and Northeast Ohio native Josh McDaniels interviewed Friday in Berea, but left without a deal in place. So far, none of the reported GM candidates have been linked to McDaniels.

WHO IS JOSH MCDANIELS?: The local kid who is the leading Browns coaching candidate

Buffalo Bills OC Brian Daboll (who held the same position in Cleveland a decade ago) is also considered a top Browns head coach contender. Sources told ESPN's Chris Mortensen Daboll had a "strong interview" and is a "sleeper" for the position.

REPORT: No decision on Browns coaching search expected on Friday

RELATED: Why is Brian Daboll a finalist to fill Browns' coaching vacancy?