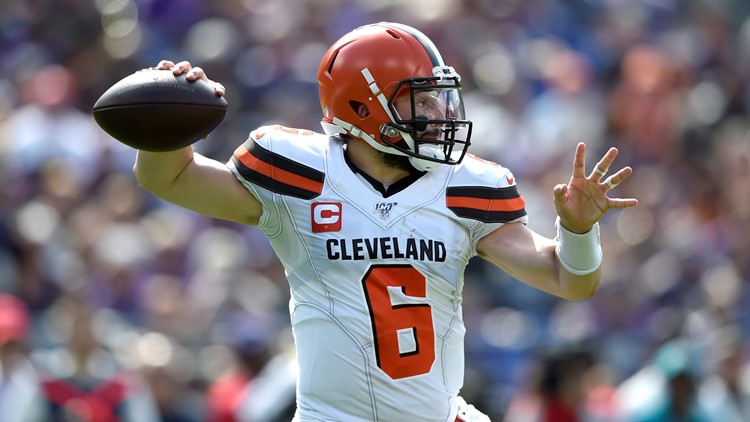 Photo by: Gail Burton/AP
Cleveland Browns quarterback Baker Mayfield looks to pass against the Baltimore Ravens during the first half at M&T Bank Stadium in Baltimore on Sunday, September 29, 2019.

Following his team's 31-3 win over the Cleveland Browns on Monday, San Francisco 49ers cornerback Richard Sherman took issue with Baker Mayfield, who he said snubbed his team during handshakes prior to the pregame coin toss.

"What's amazing, and annoying, was him not shaking hands at the beginning," Sherman said, according to Mike Silver of the NFL Network. "That's some college s---. It's ridiculous. We're all trying to get psyched up, but shaking hands with your opponent -- that's NFL etiquette. And when you pull bush league stuff, that's disrespectful to the game. And believe me, that's gonna get us fired up."

Video evidence, however, suggests Sherman's assessment of the situation may not have been accurate.

In a video posted to the 49ers' Instagram story, Mayfield can be seen shaking hands with multiple San Francisco captains and even hugging tight end George Kittle. While it's tough to glean anything about the interaction between Mayfield and Sherman -- if there even was one -- the Cleveland quarterback doesn't appear to outright refuse a handshake from Sherman, as the 4-time Pro Bowl cornerback seemed to insinuate.

Despite the 49ers' own video indicating otherwise, Sherman's comments served as one of the primary talking points on sports radio on Tuesday morning. To many, Mayfield's alleged refusal to shake hands with his opponent seemed hypocritical given that when explaining his infamous crotch-grabbing incident at Oklahoma in 2017, the former Sooners quarterback cited frustration over opponents at Kansas refusing to shake his hand.

Sherman, however, wasn't the only player of the 49ers sideline to take issue with Mayfield. After turning in a two-sack performance on Monday night, rookie defensive end Nick Bosa not only mocked one of Mayfield's most famous celebrations, but also shared that he spent the game trash-talking the Browns' second-year quarterback.

"I was kind of trying to talk. I don't usually talk. But this game, he had it coming. But he didn't say one word back," Bosa said. "I was just screaming his name like, "Baaaaaker. Baaaker. You good? Come on, pick it up. We want a challenge.' Stuff like that."