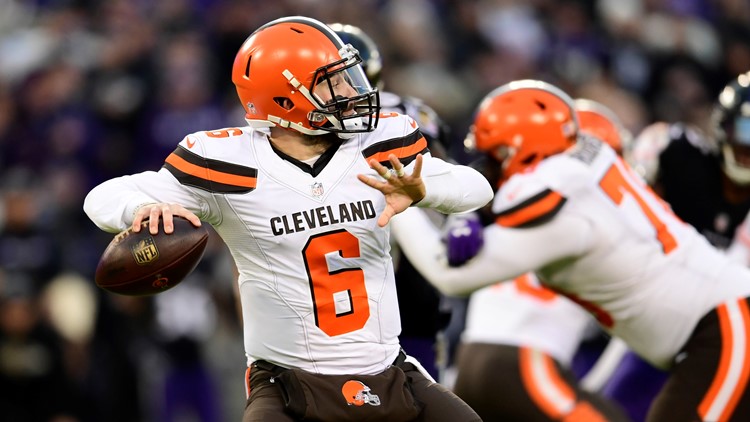 CLEVELAND — The Cleveland Browns selected quarterback Baker Mayfield with the No. 1 overall pick in the 2018 NFL Draft because they believed he had the potential to become the franchise signal-caller the organization has lacked for more than 15 years.

Although the plan was for Mayfield to sit and wait behind veteran Tyrod Taylor, fate had other ideas.

Cleveland Browns quarterback Baker Mayfield (6) reacts after throwing a touchdown in the first quarter against the Baltimore Ravens at M&T Bank Stadium in Baltimore, Maryland on December 30, 2018.
Rob Carr

Although Mayfield does not get official credit for the victory over the Jets because he came on in relief when Taylor suffered a concussion, the first-year quarterback guided the Browns to seven wins and the greatest single-year turnaround in franchise history.

Individually, Mayfield set franchise records for the most passing touchdowns and yards by a rookie, and his 3,725 yards rank as the sixth-best single-season in team history, regardless of years of service. Additionally, Mayfield had three of the top five passing yards games by a Browns rookie, as well as the fourth-most accurate season of any Cleveland quarterback ever.

Here is a look at five of Mayfield’s best moments from the 2018 season.

Mayfield broke the NFL record with his 27th touchdown throw of the season with 3:24 to play in regulation of a 26-24 loss to the Baltimore Ravens in an AFC North Division clash at M&T Bank Stadium in Baltimore on December 30.

On second-and-goal from the Baltimore one-yard line, Mayfield slipped a quick screen pass to fellow rookie Antonio Callaway on the left side of the formation. With wide receiver Rashard “Hollywood” Higgins drawing the attention of multiple defenders with a play fake, Callaway ducked around a tackle attempt and stepped across the goal line for the touchdown.

Mayfield’s touchdown to Callaway broke a first-place tie with Russell Wilson (Seattle Seahawks) and Peyton Manning (Indianapolis Colts) for the most touchdowns thrown by an NFL rookie quarterback.

Mayfield and the Browns literally came out firing in a win over the Carolina Panthers at FirstEnergy Stadium in Cleveland on December 9.

On first-and-10 from the Cleveland 25-yard line, Mayfield took a snap under center, faked a handoff to running back Nick Chubb and rocketed the ball down the numbers on the left side of the field, where Perriman had gotten behind the coverage of Panthers cornerback Donte Jackson.

Perriman secured the catch at the Carolina 19-yard line and stumbled his way to another 10 yards before being brought down inside the 10.

Two plays later, wide receiver Jarvis Landry ran in for the touchdown from three yards out.

Mayfield let it be known in the days following the first meeting of the season with the Bengals (November 25) that he was not happy with former coach Hue Jackson for accepting an offer to remain in the AFC North Division after his dismissal from the Browns on October 29.

And just in case those words were forgotten, Mayfield served up a reminder after sealing a 26-18 victory over the Bengals with a 66-yard pass to tight end David Njoku with 1:48 to play in the fourth quarter on December 23.

Following the completion, Mayfield appeared to stare down and smile at Jackson while looking toward Cincinnati’s sideline, and then, backpedaled his way down the field before taking three snaps out of the victory formation to exhaust the clock.

In leading the Browns to their first regular-season series sweep of the Bengals since 2002, Mayfield completed 27 of his 37 attempts for 284 yards and three touchdowns. Mayfield spread the ball around to nine different receivers, rushed for 16 yards and was not sacked in the win.

In his two games against the Bengals this year, Mayfield was 46 of 63 for 542 yards and seven touchdowns with no interceptions. Additionally, Mayfield rushed for 12 yards on 10 carries and was not sacked in either outing.

Browns running back Carlos Hyde fought his way into the end zone, and an unconventional two-point conversion drew the team even with the Jets, 14-14, with 42 seconds left to play in the third quarter of their Thursday Night Football game at FirstEnergy Stadium on September 20.

Then, the trickery began.

After offsetting penalties wiped out the first two-point conversion attempt, which resulted in a sack-fumble for the Jets, the Browns got a second chance and took full advantage of it.

At the start of the play, Mayfield ran out of the backfield on a pass pattern and the ball was directly snapped to running back Duke Johnson Jr. After fielding the snap, Johnson ran right and pitched the ball to Landry, who then floated a pass toward Mayfield on the left side of the field.

Left open on the play, Mayfield hauled in the game-tying conversion attempt.

Mayfield is known for his ability to throw on the run, and he put that on display against the Panthers near the midway point of the second quarter.

With the Browns facing a third-and-17 from the Cleveland 49-yard line, Mayfield avoided a rush from the Panthers and muscled a throw deep down the left side of the field for Landry, and despite two defenders closing on him, the veteran pass catcher hauled in his third receiving score of the season.

Landry started the play on the right side of the formation and ran down the middle of the field until he reached the 20-yard line, and then, did a hard bank left toward the sideline. Seeing Landry hustling down the field, Mayfield launched the pass and his receiver high-pointed the ball and maintained possession throughout the conclusion of the play for the touchdown.