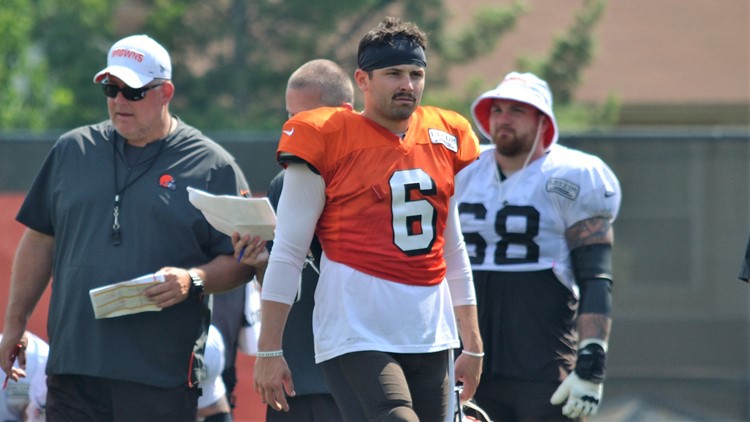 Photo by: Matt Florjancic
Cleveland Browns quarterback Baker Mayfield looks on during a drill in training camp on Monday, July 29, 2019.

Will Baker Mayfield ever stop earning points on the "gets us" meter? We certainly doubt it.

Following Saturday's Orange & Brown Scrimmage at FirstEnergy Stadium, the Browns quarterback decided to journey downtown to the Indians game against the Los Angeles Angels. Sitting in a suite with his wife Emily, it didn't take long for the jumbotron cameras to find the couple taking in the action?

What did Mayfield do? The only natural thing, of course: shotgun a beer before pointing to the back of his Francisco Lindor jersey and pumping up the crowd. As expected, the Progressive Field faithful were loving it, and the glorious moment was thankfully captured on video.

The Indians even took a shot at radio host and noted Mayfield hater Colin Cowherd to boot...

It seems Baker got the Tribe's attention as well: Following his shotgun, the team busted out with two homers to take a 5-0 lead over LA.