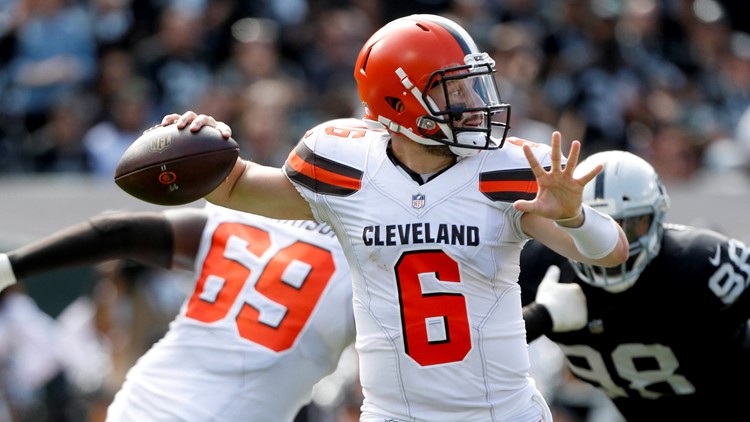 Cleveland Browns rookie quarterback Baker Mayfield continues to settle into his new role as the starter, and the Oakland Raiders are getting a first-hand lesson in what confidence does for a young signal-caller at the Oakland-Alameda Coliseum.

After the Browns’ defense recorded their second interception of the game, Mayfield engineered a two-play, 31-yard drive and capped it off with a two-yard touchdown pass to wide receiver Jarvis Landry in the left back corner of the end zone, which gave Cleveland a 28-14 lead over Oakland with 7:26 to play in the third quarter.

On second-and-goal from the Oakland two-yard line, Mayfield took a snap under center, froze the defensive front with a fake handoff to running back Carlos Hyde and looked immediately to the left corner of the end zone.

Mayfield lofted a pass toward wide receiver Jarvis Landry, and after getting a enough separation from Oakland defensive back Rashaan Melvin, he hauled in the catch and got both feet down in bounds for the touchdown.

For the third time in the game, the Browns went for a two-point conversion, and after running back Duke Johnson Jr. was ruled down by contact short of the goal line, Coach Hue Jackson challenged the call. The Browns won the replay review, and that gave them a 14-point lead over the Raiders.

Defensive back Damarious Randall recorded the Browns’ second interception of the game and returned the ball 50 yards from Cleveland’s 19-yard line to Oakland’s 31.