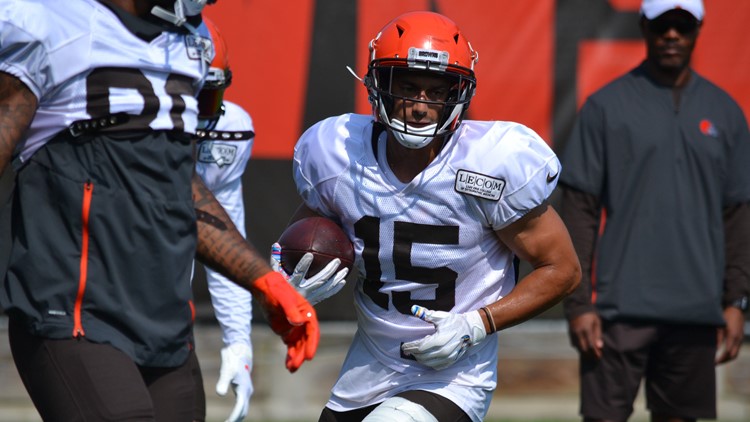 Photo by: Matt Florjancic
Cleveland Browns Damon Sheehy-Guiseppi turns upfield after catching a pass during a drill in a training-camp practice in Berea on July 28, 2019.

CLEVELAND -- Damon Sheehy-Guiseppi's NFL journey was already an improbable one.

And it now includes a touchdown on his resume.

In the final minutes of the Cleveland Browns' preseason opener against the Washington Redskins on Thursday, the 24-year-old dropped back to field a punt that came off the foot of Tress Way. Sheehy-Guiseppi then proceeded to burst 86 yards down the field for a touchdown, tacking on the final six points of Cleveland's 30-10 preseason victory.

After the play, Sheehy-Guiseppi was mobbed by a throng of his Browns teammates in the end zone before ultimately taking to an oxygen tank on the team's sideline.

If you aren't familiar with the story of how Sheehy-Guiseppi found his way onto the Browns' roster, it's a good one. Despite being a standout returner at Phoenix College, he hasn't played organized football since 2016, his NFL dreams having seemingly already come to an end.

This past offseason, however, Sheehy-Guiseppi revived those dreams when he convinced Browns executive Alonzo Highsmith to let him perform at an impromptu workout in North Miami.

"He had an excellent workout,” Highsmith told ClevelandBrowns.com. “Caught punts well, ran fast. I called (Browns assistant general manager) Eliot (Wolf) and I said 'hey, this kid Damon Sheehy, man he ran fast.' He goes 'really?' I said 'yeah, he caught the ball well, I'm thinking we should bring him up.' And then I was like, well, maybe we'll wait, but then I thought about it and Eliot goes 'well let's just bring him in now.'"

Entering Thursday night's matchup, Sheehy-Guiseppi wasn't listed on Cleveland's depth chart with Antonio Callaway, Dontrell Hilliard and Jarvis Landry each listed at punt returner. After Thursday's showing, however, that might change -- although first, he's going to need to catch his breath.