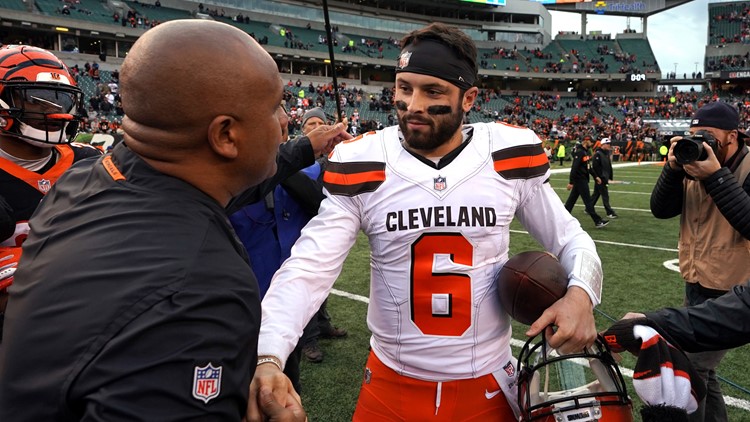 CLEVELAND — NFL reporter Mike Silver and former Cleveland Browns coach Hue Jackson have a close relationship and that bond became a punchline in a joke from NFL Network’s Rich Eisen during the Free Agency Frenzy Live special on Wednesday.

Silver called into question the maturity of Browns quarterback Baker Mayfield, but shortly after the ripping started, Eisen turned the tables on the veteran reporter.

“I would argue that the quarterback needs to grow up and that somebody in that organization needs to tell him what it’s like to be a professional, so I’ll just put that out there,” Silver said.

That statement prompted Eisen to temporarily leave the set to look for the former Browns coach.

“Is Hue around here? Hue?” Eisen said while walking off the set. “Is he here? Hue? Hue, are you here?”

Silver tried to laugh off the moment, saying multiple times, “I might have some back up.”

Mayfield broke the NFL rookie record with his 27th touchdown throw of the season with 3:24 remaining in the fourth quarter of a 26-24 loss to the Baltimore Ravens in an AFC North Division clash at M&T Bank Stadium in Baltimore on December 30.

Under the direction of new Browns coach Freddie Kitchens, who was the interim offensive coordinator for the second half of the 2018 season, Mayfield completed 180 of his 263 attempts (68.4 percent) for 2,254 yards and 19 touchdowns against eight interceptions.

Cleveland Browns quarterback Baker Mayfield throws a pass in the first half of an NFL football game against the Baltimore Ravens at M&T Bank Stadium in Baltimore on Dec. 30, 2018.
Nick Wass, AP

But Silver’s comments have more to do with Mayfield’s extracurricular activities in two games against Jackson and the Cincinnati Bengals after the former Browns coach agreed to join his close friend, Marvin Lewis, on the staff of the AFC North Division and in-state rival midseason.

Mayfield let it be known in the days following the first game against the Bengals that he was not happy with Jackson for accepting an offer to remain in the AFC North Division after his dismissal from Cleveland on October 29.

Mayfield shook hands but did not say much to Jackson following the Browns’ first win over the Bengals at Paul Brown Stadium in Cincinnati on November 25, and when criticized for his actions, he responded to an ESPN First Take Instagram post by calling Jackson “fake.”

And just in case those words were forgotten, Mayfield served up a reminder after sealing a 26-18 victory over the Bengals with a 66-yard pass to second-year tight end David Njoku with 1:48 to play in the fourth quarter of the December 23rd meeting in Cleveland.

Following the completion, Mayfield appeared to stare down and smile at Jackson while looking toward Cincinnati’s sideline, and then, backpedaled his way down the field before taking three snaps out of the victory formation to exhaust the clock.

“If you’re not in our locker room, if you’re not on our team, you’re against us,” Mayfield said to Adam Schein on Mad Dog Sports Radio on Radio Row during Super Bowl week in Atlanta last month. “That’s always been my attitude. It doesn’t matter who it is. You know what, that makes it more fun.