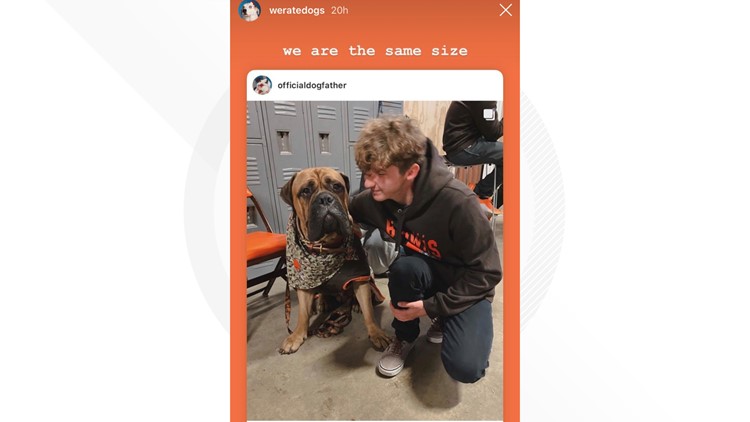 CLEVELAND — If you've ever seen a social media photo of a dog with a caption giving it a 13/10 rating, it's likely from the popular We Rate Dogs Instagram and Twitter accounts.

The account was created by Matt Nelson, who was merely a college freshman at the time. He started a quirky, humorous Twitter account dedicated to dogs, which he rated on a 10-point scale with comical captions.

Since then, the @dog_rates Twitter account has ballooned to more than 8.5 million followers who enjoy the cute photos of pups with funny captions. Followers can also submit their own dogs to be rated by sending photos via direct message. Meanwhile, the @weratedogs Instagram account has more than 1.3 million followers.

Nelson met another special dog to be rated on Sunday, when he visited FirstEnergy Stadium in Cleveland as the Browns hosted the Buffalo Bills. But Nelson wasn't there to see Baker Mayfield and company. He came to town to meet Swagger Junior, or SJ, the official Browns mascot who made his on-field debut.

Prior to his big appearance, SJ received support from Nelson, which was documented on his Instagram account.

SJ ran out of the tunnel and onto the field to hype up fans prior to kickoff. He is the son of Swagger, the bullmastiff who retired after the Browns' home game against the Seattle Seahawks. The pair comes from FD Farms in Rootstown, Ohio.

RELATED: Finally. Cleveland Browns get back into win column with 19-16 victory over Buffalo Bills