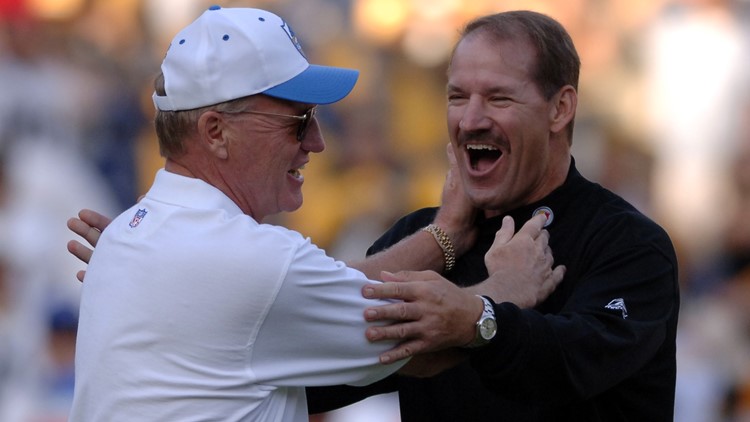 Cowher, an analyst for CBS, was surprised by the announcement made live on air in studio before the Tennessee Titans-Baltimore Ravens AFC divisional round playoff game Saturday night. Hall President and CEO David Baker delivered the news to Cowher during CBS's The NFL Today pregame show broadcast.

"This isn’t right that this is happening right now, but..." an emotional Cowher told Baker as the announcement was made. His wife Veronica and daughter Meagan, along with the show's cast and crew, then joined him on set to congratulate him.

Cowher was the coach of the Steelers for 15 seasons from 1992 to 2006, and led them to 10 playoff appearances including two Super Bowls, winning one over Seattle in 2006. His Pittsburgh teams won nine division titles, with an overall record of 161-99-1.

Prior to his career in Pittsburgh, Cowher played in the NFL for six seasons as a linebacker and on special teams. He spent three years with the Browns, and was a member of the beloved "Kardiac Kids" team that won the 1980 AFC Central division title.

After his playing career ended with the Philadelphia Eagles, Cowher returned to Cleveland as the special teams coordinator under Marty Schottenheimer in 1985. He was eventually promoted to defensive backs coach, and became one of the head coach's most-trusted lieutenants as the Browns made it to two AFC Championship Games.

Owner Art Modell fired Schottenheimer after the 1988 season, but the coach quickly landed the same job with the Kansas City Chiefs and brought Cowher with him to be his defensive coordinator. The young assistant continued to impress and was even a finalist for the Cincinnati Bengals' top job in 1991, but was passed over in favor of Dave Shula. However, the Crafton, Pennsylvania native would instead replace the legendary Chuck Noll (another former Brown) in Pittsburgh.

FILE - In this Sunday, Feb. 5, 2006 file photo, Pittsburgh Steelers head coach Bill Cowher high-fives Hines Ward (86), MVP of the Super Bowl XL football game, after they defeated the Seattle Seahawks, 21-10 in Detroit. Former Pittsburgh Steelers coach Bill Cowher has been elected to the Pro Football Hall of Fame. Cowher, an analyst for CBS, was surprised by the announcement made live on air in studio before the Tennessee Titans-Baltimore Ravens AFC divisional round playoff game Saturday night, Jan. 11, 2020.
Elaine Thompson/AP

Besides being spurned by the Bengals, Cowher was not considered a major candidate for the Browns head coaching position the same year. He would go on to make both teams pay dearly, posting a combined 43-14 record (including 2-0 in the playoffs) against them during his tenure.

Cowher was elected as part of the Hall of Fame's special Blue-Ribbon Panel panel that will induct 10 "senior" players, three contributors, and two coaches (in addition to the five modern era honorees) to commemorate the NFL's 100th anniversary. The remaining 14 special members will be announced on Wednesday.