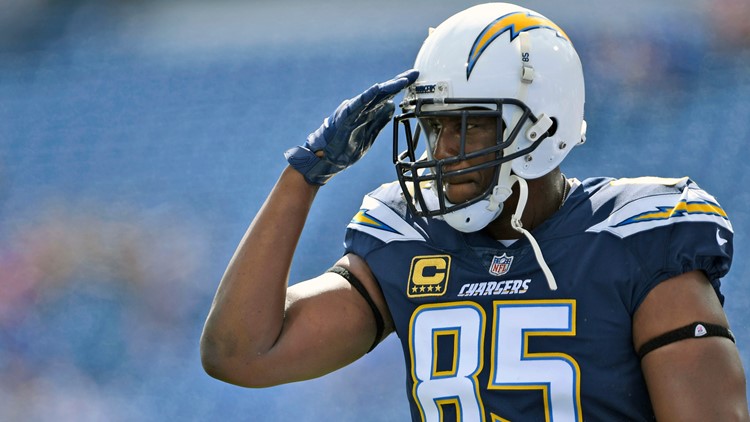 Photo by: Adrian Kraus/AP
FILE - In this Sept. 16, 2018, file photo, Los Angeles Chargers' Antonio Gates warms-up before an NFL football game against the Buffalo Bills, in Orchard Park, N.Y. Gates announced his retirement, Tuesday, Jan. 14, 2020, following a 16-year career that saw him finish with 116 touchdowns, which is the most by a tight end in NFL history.

Following a long and illustrious career, Antonio Gates has announced his retirement.

Gates spent his entire 16-year run with the San Diego and Los Angeles Chargers, with whom he became one of the most prolific tight ends in the NFL despite not playing college football. His 116 touchdown catches are the most by a tight end.

In a statement, Gates said, in part:

"I never dreamed that I would play this game of football so long or how fortunate I would be to play it with just one organization...I'm looking forward to beginning the next chapter of my career and am grateful for the opportunity to be back around the team and our fans."

The 39-year-old Gates did not play this past season, and will join the Chargers front office as a legends ambassador. He is the franchise leader in receptions, receiving yards and touchdowns. His 220 regular-season games are second.

A five-time All-Pro, Gates had eight seasons when he had eight or more touchdowns and 21 multi-TD games. With him on the field, the Chargers made the playoffs eight times, including a trip to the AFC Championship Game in 2007.

Gates' road to stardom was an unconventional one: He originally committed to play both football and basketball at Michigan State, but after learning that then-head coach Nick Saban wanted him to only focus on the former, he instead transferred to Eastern Michigan and only played the latter. He played for the Eagles for a year before enrolling at the College of the Sequoias in California to get his grades up, and in 2001 headed to Kent State to again play basketball.

As a power forward, Gates averaged 16.0 points and 8.1 rebounds per game as a junior and led the Golden Flashes to the MAC championship and a magical run though the 2002 NCAA tournament. The team upset Oklahoma State, Alabama, and Pittsburgh to reach the Elite Eight before falling to eventual national runner-up Indiana.

Gates averaged 20.6 points, 7.7 rebounds, and 4.1 assists as a senior and was named as an honorable mention to the Associated Press' All-America team. Despite the accolades, he was considered too much of a "tweener" to play in the NBA and instead decided to hold a football tryout for potential suitors. Despite never playing a down in college, the Chargers signed him to a contract, and the rest is history.

For his achievements on the basketball court, Kent State retired Gates' number 44 in 2010. He will be eligible for the Pro Football Hall of Fame in September of 2023.