On the eve of the 2020 NFL season, Ben Axelrod shares his latest mock draft for the 2021 NFL Draft. 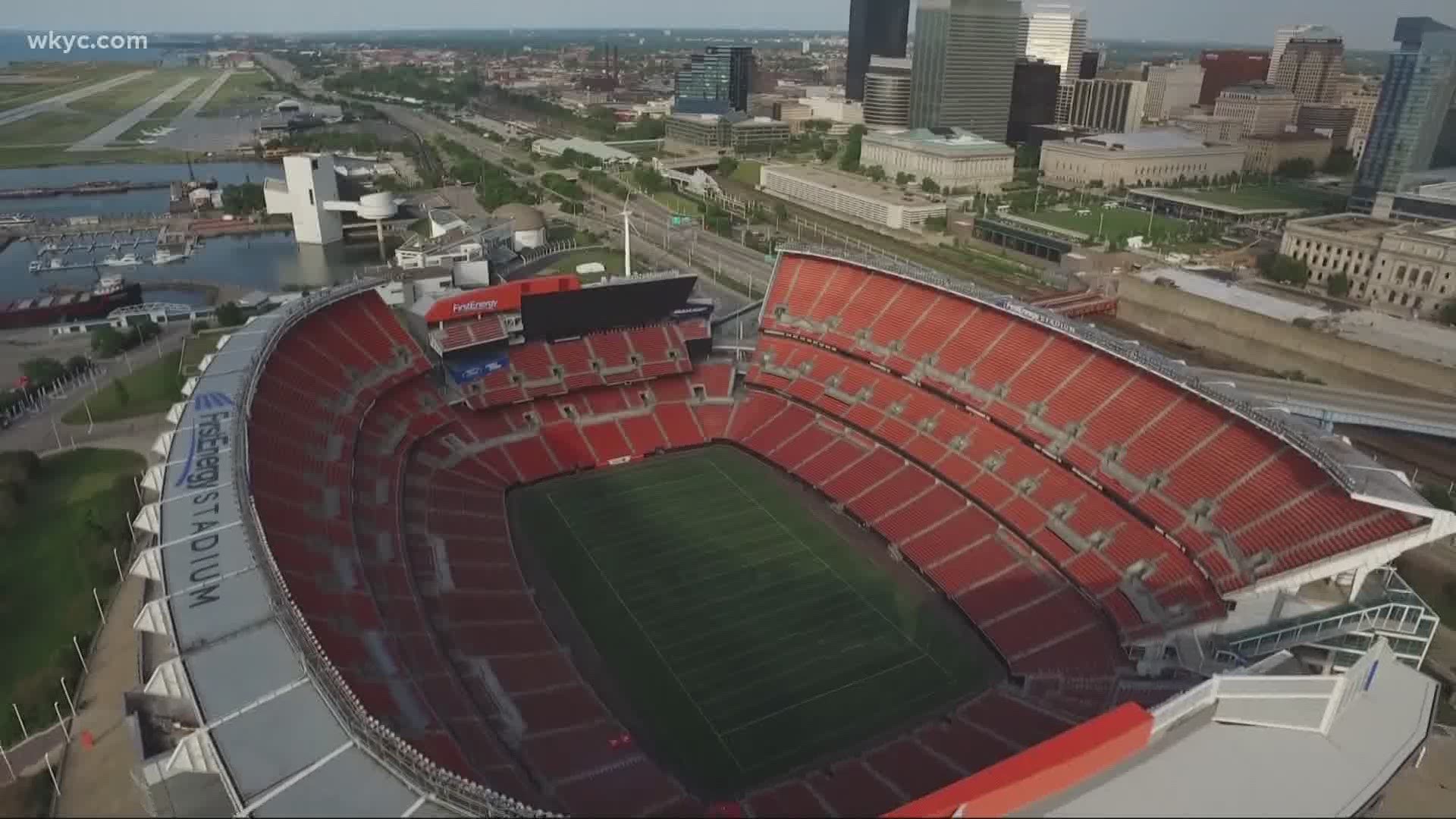 The 2020 NFL season is finally here, which means that the 2021 NFL Draft in Cleveland is just months away. With that in mind, let's take a look ahead to next year's big event with our latest mock draft on the eve of the 2020 season.

Having traded/released multiple starters in the weeks leading up to the 2020 season, Jacksonville appears to be in the midst of a full-on tank. Considered the top quarterback prospect since perhaps Andrew Luck, Trevor Lawrence would make for a heck of a prize.

Drafting second for a second straight season would likely put the Washington Football Team in a position to draft a new franchise quarterback. But unless they have a chance to take Lawrence, drafting a long-term replacement for Trent Williams in Penei Sewell might be the better course of action.

Another top-five pick would likely mean the end of the Matthew Stafford era in Detroit. Ohio State's Justin Fields would be a heck of a building block for a new Lions regime to start with.

With Teddy Bridgewater still under contract for two more years, Carolina can take the best player available. In this case, that happens to be LSU's Ja'Marr Chase, who possesses the potential to be one of the most dominant rookie wide receivers in quite some time.

Drafting this high would likely put the Giants in a position to consider replacing Daniel Jones. Instead, they opt for a player in Micah Parsons who could continue the franchise's storied history of All-Pro linebackers.

After spending their last four first-rounds picks focusing on offense, the Bengals turn their attention to defense. Having tallied 15.5 sacks in 2019, Gregory Rosseau could serve as a long-term cornerstone in Cincinnati.

With the Tua Tagovailoa era set to begin, Miami gets its young quarterback a new target. Not only is Jaylen Waddle a familiar face, but the Alabama product possesses the type of speed NFL offenses covet.

If the Jets return to picking in the top 10, a shaky secondary will likely be a big reason why. Having already opted out of the 2020 season, Virginia Tech's Caleb Farley is the top cornerback prospect in this year's draft.

Anything short of a postseason appearance likely means the end of the Mitchell Trubisky era. Despite playing at a small school, Trey Lance showed enough potential in 2019 to justify a top 10 pick -- if not higher.

The Cardinals have raised their overall talent level, but a gaping hole remains at offensive tackle. Outside of Sewell, Texas' Samuel Cosmi might be the best in next year's draft.

If Justin Herbet is going to have a chance with the Chargers, they're going to need to protect him. Alabama's Alex Leatherwood is a 5-star talent who possesses the versatility to play on either side of the line.

Barring a big season from Garrett Bolles, the Broncos will be in the market for an offensive tackle. Like Lance, Dillon Radunz has already done enough to establish himself as a first-round talent.

Many were surprised to see the Raiders use one of their 2020 first-round picks on Ohio State's Damon Arnette. Unless he overachieves, it wouldn't be surprising to see Las Vegas use another high pick on a cornerback, with Patrick Surtain II possessing the pedigree to be a Pro Bowl-caliber player.

Linebacker remains one of the biggest weaknesses on the Browns' depth chart. Prior to missing the 2019 season due to a knee injury, Dylan Moses had established himself as a first-round talent, while Cleveland has shown a propensity for picking players from the SEC.

Julio Jones is still plenty productive, but he's not getting any younger. At 6-foot-2, Rashod Bateman is the type of talent who could allow Jones to take on a lesser load while helping extend Matt Ryan's career.

After taking Lawrence with their first pick, the Jaguars get him a dynamic playmaker in Alabama's DeVonta Smith, who tallied 1,256 yards and 14 touchdowns in 2019.

Miami has already invested plenty in its secondary, but Shaun Wade is too talented -- and versatile -- to pass up. Plus, the Dolphins have shown an affinity for acquiring defenders from Ohio State in recent drafts.

As is often the case with the Patriots, a trade back is the more likely outcome. But if they stay put, grabbing a former 5-star prospect in Ohio State's Wyatt Davis to anchor their offensive line would make a lot of sense.

After signing Jason Peters to play guard, the Eagles wound up shifting the veteran to left tackle out of need. Stanford's Walker Little could help ensure Philadelphia doesn't face the same fate next season.

So long as Tom Brady's still around, Tampa Bay would be wise to continue investing in protecting him. Tennessee's Trey Smith would pair nicely with 2020 first-round pick Tristan Wirfs.

Outside of JuJu Smith-Schuster, Pittsburgh's wide receiving corps leaves something to be desired. Ohio State's Chris Olave is the type of all-around player who typically thrives in the Steelers' system.

With T.Y. Hilton now 30-years-old, it makes sense for Indianapolis to continue to invest in its wide receiving corps. Here, they reach into their own backyard to take Rondale Moore, whose speed would work well next to 2020 second-round pick Michael Pittman Jr.

Between Danielle Hunter and Yannick Ngakoue, Minnesota has one of the best defensive end duos in the league. Adding a former 5-star talent in Marvin Wilson II to the middle of their line would only make the Vikings' defense all the more dangerous.

With one of the picks it received for trading Jamal Adams, the Jets find his replacement. A versatile ballhawk, Oregon's Jevon Holland is considered the top safety in the 2021 draft.

At some point, the Packers are going to have to get somebody for Aaron Rodgers to throw to besides Davante Adams, right? In a draft loaded at the position, Wake Forest's Sage Surratt could be the most complete receiver in the draft.

The Cowboys' needs in the secondary -- especially at safety -- are clear. One of the best defensive backs in the country, TCU's Trevon Moehrig rated as Pro Football Focus' top safety in the 2019 season.

Picking this late in the draft would give Tennesee the luxury of prioritizing talent over need. Clemson's Justyn Ross could combine with A.J. Brown to give the Titans two dynamic -- and tall -- pass-catchers.

Sheldon Rankins has battled injuries in recent years and will become a free agent following the 2020 season. Georgia's Jordan Davis could provide a big boost to the middle of New Orleans' defensive line.

The departure of Earl Thomas leaves an unexpected void in the Ravens secondary. Texas' Caden Sterns could be an ideal candidate to fill that hole.

Richard Sherman will be 33-years-old when the 2021 season begins. At 6-foot-1 and 205 pounds, Jaycee Horn possesses the type of size the 49ers covet.

With all of the money it has committed on offense, Kansas City is going to need to invest some of its draft capital on defense. After transferring from North Dakota State to LSU, linebacker Jabril Cox will have the opportunity to further establish himself as a first-round talent in 2020.