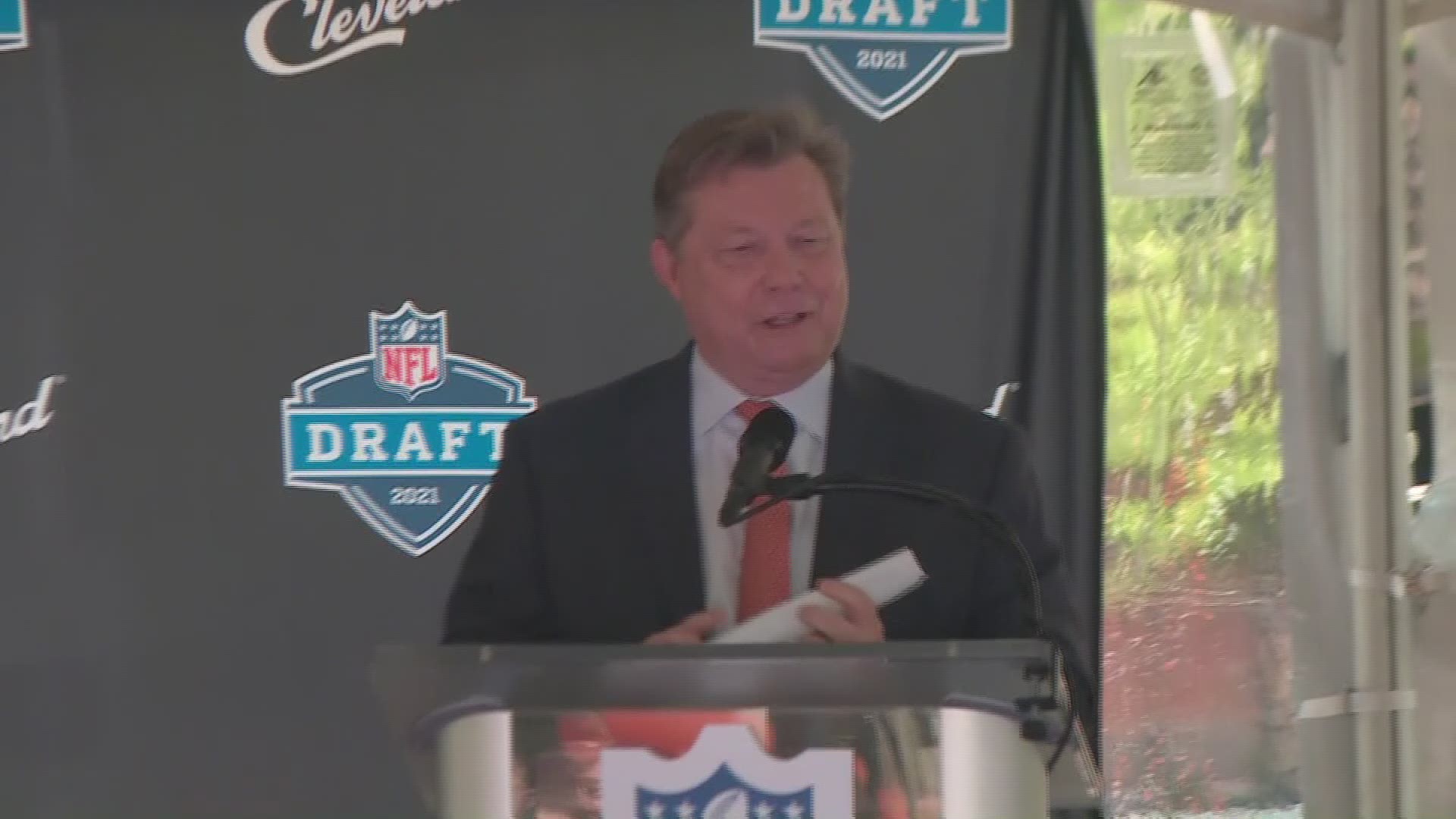 With the 2021 NFL Draft in Cleveland officially a year away, let's take a look at how the event might play out with our first 2021 NFL Mock Draft.

Considered the best quarterback prospect since Andrew Luck, Clemson's Trevor Lawrence enters the 2021 Draft favored to be the No. 1 pick. Barring an unforeseen playoff run, Jacksonville will likely be in the market to draft a signal-caller after entering 2020 with Gardner Minshew II as its starter.

Should the Redskins once again wind up with the No. 2 overall pick, they will likely be ready to move on from the Dwayne Haskins experiment. While that might make them wary of taking another Ohio State quarterback, Justin Fields possesses the type of size and athleticism to provide Ron Rivera with his next version of Cam Newton.

Another top 3 draft pick would likely put Detroit into a full-scale rebuild. With both of the top quarterbacks off the board, Oregon offensive tackle Penei Sewell makes sense as a blue-chip building block with Taylor Decker entering the final year of his contract.

In another loaded wide receiver class, Ja'Marr Chase stands out as the top prospect after catching 84 passes for 1,780 yards and 20 touchdowns in 2019. Reuniting with former LSU offensive coordinator Joe Brady, Chase could be a building block in the Panthers' long-term rebuild and put a weapon in place for a potential first-round quarterback in 2022.

Another top-five pick might put the Giants in the market for not just a new general manager, but quarterback as well. But given their aging wide receiving corps, it makes sense for New York to add one of the draft's top pass-catchers in Justyn Ross, who's caught 112 passes for 1,865 yards and 17 touchdowns in his first two seasons at Clemson.

While the Bengals gave Joe Burrow a new weapon to play in Tee Higgins, they failed to make a significant investment in protecting their new franchise quarterback. Barring a big trade or free agency signing, they'll likely be in the market for the best offensive tackle available, who in this case is a former 5-star prospect Stanford's Walker Little.

In desperate need of pass-rush help, the Dolphins look to their own backyard. Miami's Gregory Rousseau  is a candidate to go even higher than this after posting 15.5 sacks as a redshirt freshman in 2019.

A top 10 pick would likely mean the end of the Mitchell Trubisky era in Chicago. After a breakout redshirt freshman season in 2019, North Dakota State's Trey Lance will be draft-eligible in 2021 and could sit behind Nick Foles for a season before taking over the Bears' offense.

Rather than protecting Kyler Murray, Arizona opted to use its first-round pick on defensive Swiss Army knife Isaiah Simmons in 2020. If the Cardinals don't rectify their offensive line situation in free agency or with a trade, a top-level tackle like 6-foot-7, 310-pound Samuel Cosmi would make a lot of sense.

Keenan Allen is set to become a free agent after the 2020 season and Mike Williams is now eligible for an extension. Taking a wide receiver as talented as Devonta Smith, who caught 68 passes for 1,256 yards and 14 touchdowns, could give the Chargers some flexibility or 2020 first-round pick Justin Herbert another weapon to play with.

The Jets used a second-round pick on Denzel Mims, but still need to add weapons around Sam Darnold. Alabama's Jaylen Waddle possesses the type of speed that would fit and add a new dynamic to any offense.

Denver traded for A.J. Bouye this offseason, but the former Jacksonville Jaguar is slated to become a free agent after 2021. A former 5-star prospect, Ohio State's Shaun Wade possesses the talent and versatile to play multiple positions at the next level.

Las Vegas used a first-round pick on Damon Arnette in 2020, but the Ohio State product might best be suited as a nickel back at the next level. The son of a former All-Pro, Patrick Surtain II projects as a potential lockdown NFL corner.

While the Browns used their 2020 NFL Draft to fill multiple needs, they still need help at linebacker. A former 5-star prospect, Micah Parsons would provide the type of playmaker Cleveland's linebacking corps has lacked.

A top-15 pick could cause Atlanta to consider its future after Matt Ryan, who has an out in his contract after the 2021 season. After spending the first three years of his college career at Wake Forest, Jamie Newman is generating first-round buzz heading into his senior season at Georgia.

Despite having Leonard Fournette on the trade block, the Jaguars didn't take a running back in the 2020 draft. First-round running backs aren't popular, but having two first-round picks gives Jacksonville the flexibility to take a talent like Travis Etienne.

As currently constructed, the Dolphins lack difference-makers at linebacker. Should he bounce back from the torn ACL that cost him his entire 2019 season, Alabama's Dylan Moses could provide just that.

It seems likely the Patriots will be drafting even higher than this, but unlikely they'll be drafting high enough to tab one of the top quarterbacks. Either way, it makes sense for New England to replenish its collection of skill players and Ohio State's Chris Olave feels like the type of versatile, smart and productive receiver Bill Belichick would value.

The departure of Malcolm Jenkins leaves a void in the Eagles' secondary that's yet to have been filled. With a big junior season, former 5-star recruit Caden Sterns could be the man for the job.

A former 5-star prospect, Marvin Wilson returned to Florida State for his senior season in hopes of improving his draft stock. If he can do that, he could make for an intriguing selection for a team like the Seahawks, who could stand to upgrade the middle of their defensive line.

While Tampa Bay's passing game is loaded, running back remains one of the most glaring holes on its roster. The nation's second-ranked recruit in 2017, Najee Harris could step right into the Buccaneers lineup for what could very well be the final season of Tom Brady's career.

Pittsburgh has shown that as long as Ben Roethlisberger is around, it won't threaten his position as the team's undisputed starter. Instead, the Steelers bolster his collection of skill players, 6-foot-4 target Terrace Marshall Jr., who caught 46 passes for 671 yards and 13 touchdowns in 2019.

After spending their 2020 draft improving at receiver and cornerback, the Vikings look to beef up both of their lines in 2021. At 6-foot-3 and 346 pounds, LSU's Tyler Shelvin is not just a space-eater but also a disruptor.

A quarterback could be in play here should a fifth player at the position emerge as first-round worthy. Instead, the Colts look to their own backyard to improve their receiving corps with versatile speedster Rondale Moore.

After drafting his presumed replacement in Jordan Love, the Packers throw Aaron Rodgers a bone, adding Minnesota's Rashod Bateman (60 receptions, 1,219 yards, 11 touchdowns in 2019) to a receiving corps in desperate need of upgrading.

The money that Dallas has committed to Ezekiel Elliott and Amari Cooper could make 7-time Pro Bowl tackle Tyron Smith a begrudged cap casualty. After returning to Alabama for his senior season, Alex Leatherwood could make for a suitable -- and cheaper -- replacement.

Another playoff run for Buffalo would likely further the Bills' investment in quarterback Josh Allen. And Trey Smith is the top of high-level guard who could not only help protect that investment but fit with Buffalo's offensive identity.

Following the offseason departure of Delanie Walker, tight end remains one of the Titans' biggest needs. In what could be a strong draft for the position, Penn State's Pat "Baby Gronk" Freiermuth is the early front-runner to be the best option.

Jared Cook enjoyed a productive first season with the Saints but will be 33-years-old entering the 2020 campaign. Miami's Brevin Jordan is the type of athletic tight end who could thrive playing alongside Michael Thomas in New Orleans.

Baltimore's secondary is strong, but could stand to add some youth. After tallying 12 pass defenses and 4 interceptions in 2019, the versatile Elijah Molden could play himself into the first round with a strong senior season.

Center is sneakily one of the most important positions in Kyle Shanahan's offense. Here, the 49ers nab the top player at the position in the draft in Oklahoma's Creed Humphrey.

The monster extension that Patrick Mahomes will soon be due puts just about any position in play here. At 6-foot-5 and 292 pounds, former 5-star prospect LaBryan Ray possesses the type of versatility to give the Chiefs flexibility moving forward.