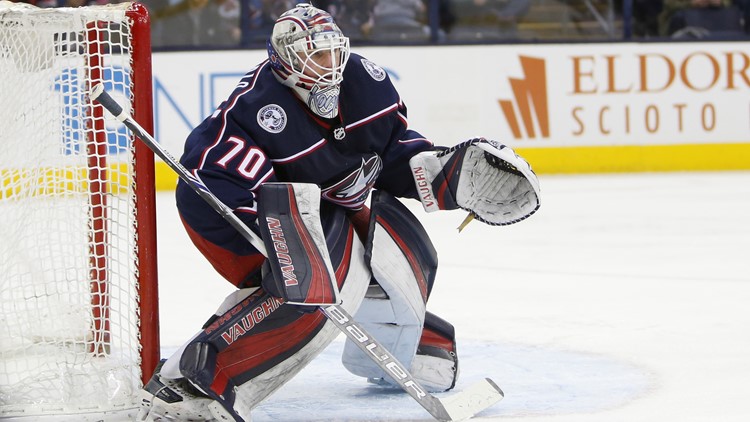 Photo by: Jay LaPrete/AP
Columbus Blue Jackets goaltender Joonas Korpisalo, of Finland, plays against the Colorado Avalanche during an NHL game at Nationwide Arena in Columbus, Ohio on Thursday, March 8, 2018.

CLEVELAND — For the second time in their history, the Columbus Blue Jackets have been selected to play in the National Hockey League’s 2020 Global Series, which annually brings multiple teams to Europe for season-opening series.

In a joint announcement from the NHL and the NHL Players’ Association, the Blue Jackets were one of four teams selected to play abroad, and they will face the Colorado Avalanche in a two-game series in Helsinki, Finland as part of the 2020 NHL Global Series.

“The Columbus Blue Jackets are proud and excited to be participating in next year’s NHL Global Series in our 20th season as a member of the National Hockey League,” club General Manager, Alternate Governor and Finland native Jarmo Kekalainen said in a statement posted to the franchise’s official website.

“It means a great deal to me personally, knowing how passionate Finnish hockey fans are, to be a part of bringing our team to the place where my NHL dreams began as a young hockey player.”

Along with Kekalainen, a native of Kuopio, Finland and the league’s first European-born general manager, the Blue Jackets have two Finnish players on their roster: starting goaltender Joonas Korpisalo and defenseman Markus Nutivaara.

The Blue Jackets opened the 2010-2011 season by appearing in the NHL Premiere, a two-game series against the San Jose Sharks in Stockholm, Sweden. The Blue Jackets lost the first game, 3-2, but came back the next night and posted a 3-2 victory in overtime.

The Blue Jackets posted a 3-2 road win over the Arizona Coyotes Thursday and will continue the trip in Colorado Saturday night and Montreal Tuesday before returning home to Nationwide Arena for a three-game homestand starting against the reigning Stanley Cup Champion St. Louis Blues on November 15.