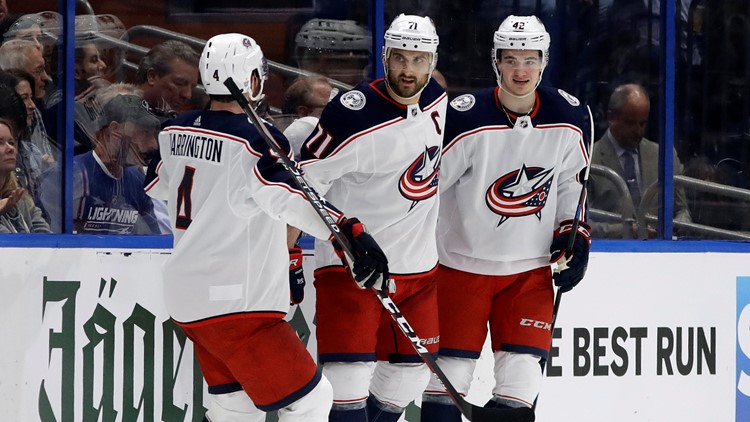 Photo by: Chris O'Meara
Columbus Blue Jackets left wing Nick Foligno (71, middle) celebrates his goal against the Tampa Bay Lightning with center Alexandre Texier (42, right) and defenseman Scott Harrington (4, left) during the second period of Game 1 of the first round of the 2019 Stanley Cup Playoffs in Tampa, Florida on Wednesday, April 10, 2019.

Whether it was family health issues, talk about the future of the players in the locker room as the NHL trade deadline approached or facing the best regular-season team in the first round of the 2019 Stanley Cup Playoffs, the Columbus Blue Jackets had to handle adversity throughout the 2018-2019 season.

Through it all, the Blue Jackets kept their core players, even those with expiring contracts, at the deadline, added talent around them and swept the Tampa Bay Lightning on the way to a second-round appearance in the postseason for the first time in franchise history.

“The biggest thing is I’m just proud of this group and I’m proud of the way we battled through adversity all year long with questions about our room, what’s going to happen and we came together as probably the strongest team I’ve seen us become in my time here,” Blue Jackets captain Nick Foligno said following their season-ending Game 6 loss to the Boston Bruins at Nationwide Arena in Columbus Monday night.

“That says a lot about this group, and if anything, I hope guys understand how hard it is to win and what it’s going to take. This one, oh, this one hurts right now.”

Boston Bruins left wing Brad Marchand (63) skates past Columbus Blue Jackets left wing Nick Foligno (71) during the second period of Game 1 of the second round of the 2019 Stanley Cup Playoffs at TD Garden in Boston on Thursday, April 25, 2019.
Charles Krupa

Right winger Cam Atkinson was among those players who lamented the end of the season because they felt there was something special about the 2018-2019 Blue Jackets, who earned the franchise’s third consecutive trip to the postseason.

“We’ve believed in here since the start of the season,” Atkinson said. “Ultimately, that’s all that matters. It doesn’t matter what the outside thinks. It’s the guys in here that go out and battle every, single day. We just have to remember how tough it is in the playoffs. You can’t take it for granted. Next year, who knows what’s going to happen, who’s going to be in this locker room, so this one stings.”

After having their season come to an end, the Blue Jackets have no shortage of questions to answer in the offseason.

Columbus Blue Jackets goaltender Sergei Bobrovsky prepares for a faceoff against the Tampa Bay Lightning during Game 3 of the first round of the 2019 Stanley Cup Playoffs at Nationwide Arena in Columbus, Ohio on Sunday, April 14, 2019.
Jay LaPrete

Goaltender Sergei Bobrovsky, left winger Artemi Panarin, defensemen Adam McQuaid, Ryan Murray and Zach Werenski and centers Matt Duchene and Ryan Dzingel, both of whom were acquired in trades with the Ottawa Senators earlier this year.

Additionally, the Blue Jackets’ other three goaltenders, Joonas Korpisalo, Keith Kinkaid and Elvis Merzlikins have contracts that expire this summer.

Regardless of how many of those free agents return to Columbus, Foligno hopes his teammates understand what it will take not just to get to the second round of the postseason, but to legitimately challenge for the Stanley Cup on a consistent basis.

“I know we’re going to come back better from this because there’s only that approach that you really can take,” Foligno said. “From everything that’s gone on with this team, there’s only growth that’s going to happen, so we’re automatically going to be a better team, but it’s understanding that every year, so is every other team.

“We’ve just got to make sure we take this feeling and just try as best we can to remind ourselves of it while we’re training, trying to get better and what we’re trying to become for next year. I hate talking about next year. It makes you sick right now with everything we’ve gone through.”