Tom Brady, Steph Curry, and Olympic gymnast Aly Raisman are just a few athletes who have been vocal about their love of floating. 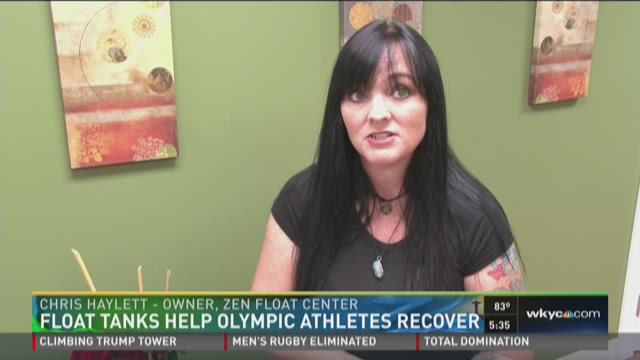 Tom Brady, Steph Curry, and Olympic gymnast Aly Raisman are just a few athletes who have been vocal about their love of floating.

From swimmers to runners to the Ohio State football team, more and more athletes are turning to float tanks to help their bodies and minds recovery.

"It works really well with athletes, before and after performance," says Chris Haylett, owner of Zen Float Center in Streetsboro. "It will actually enhance performance because it gives them a chance to focus. Afterwards, the magnesium sulfate in the Epsom salt actually helps to relax the sore muscles.'

Not an athlete herself, Haylett recognizes the appeal for the sports world.

"It reduces lactic acid. It reduces adrenaline," says Haylett. "So the recovery time for either injuries or even if you just get sore from working out or after running, it just speeds up that healing process."

Zen Float Center has two float tanks. The tanks are filled with two hundred gallons of water and one thousand pounds of Epsom salt each, making the water twice as salty as the Dead Sea.

"The water is so dense, you can't sink. There is no effort here. You just lay back, you pop up like a cork," says Haylett.

After a quick shower to remove makeup and body oils, floaters put in ear plugs, and climb on in.

More traditionally called isolation or sensory deprivation tanks, the float tanks aren't just for high-intensity athletes. She says her clients range from the ages of 12-78.

According to Haylett, an hour-long float can help sports injuries, arthritis, migraines, and even helps pregnant women and new mothers, taking the strain of carrying the baby off of their backs. She even offers a military discount, as she says float tanks has been found to be helpful in treating PTSD.

For client Beth Berland, who's logged more than 20 hours of floating, it is more about managing her stress and anxiety.

"I'm not the type of personality to just who's just genetically made up that way, to just let it go," says Berland. "I can let a lot go after floating for a while, and really reevaluate what's important."

Getting some time "away from it all" can be rare in our modern, plugged-in culture.

"An hour away from TVs, phones, computers, just the sights and the sounds we deal with constantly -- and we don't realize what a strain that's putting on us -- this gives us an hour away," says Haylett.

With all the buzz and competition of the Olympics games, it's no wonder some of the world's top athletes sometimes just need to float for a while.

"People come out with that glow afterwards," says Haylett. "It just puts you at peace."