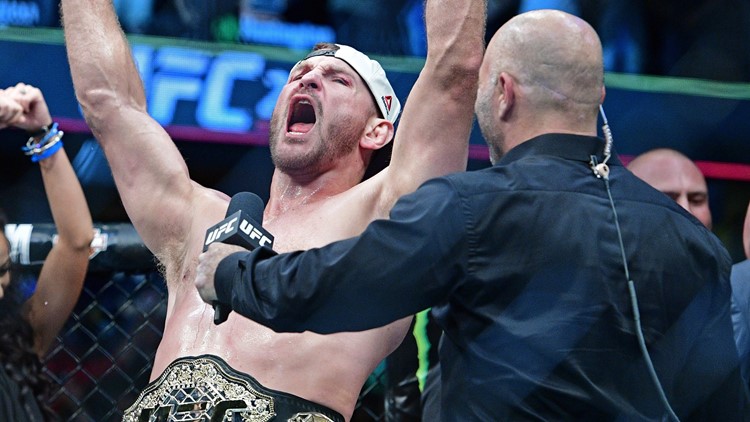 Photo by: David Dermer
Stipe Miocic celebrates while being interviewed by Joe Rogan after defeating Alistair Overeem during a heavyweight title bout at UFC 203 at Quicken Loans Arena in Cleveland, Ohio on Saturday, September 10, 2016.

Stipe Miocic: No question, I’m walking out of Daniel Cormier rematch with the belt

CLEVELAND — Stipe Miocic enjoyed his time at the top of the UFC heavyweight division, and he aims to get back that feeling once again.

A former UFC heavyweight champion, Miocic is looking to regain the title when he faces off against Daniel Cormier in a rematch of their UFC 226 fight in the main event of UFC 241 at Honda Center in Anaheim, California this Saturday night.

“What’s more motivation for me is getting my belt back,” Miocic said of being considered a second option for Cormier after a super-fight with former heavyweight champion Brock Lesnar, currently a contracted athlete with World Wrestling Entertainment, Inc., did not materialize.

“I like being called, ‘Champ,’ and it just sucks not having that belt, but like I said, we’re from Cleveland. We always have adversity. I’d like to get through it and get back on top.”

Stipe Miocic, lands a right against Junior Dos Santos in a mixed martial arts bout at UFC 211 for the UFC heavyweight championship, Saturday, May 13, 2017, in Dallas. Miocic retained his heavyweight title with a win in the first round. (AP Photo/Gregory Payan)
AP

Miocic pined for months for a rematch, and it was only after Lesnar reportedly told UFC officials that he intended to remain retired from mixed martial arts competition that the return bout with Cormier was booked.

Despite taking a thumb to the left eye on an attempted shove from the challenger early in the bout, Miocic felt he was winning for much of the first round against Cormier in his fourth defense of the UFC heavyweight championship last July.

“I’m a better fighter than him,” Miocic said of Cormier. “In every aspect of the game, I was a better fighter. I was faster, stronger, more conditioned. It happens. It’s the sport. We wear small gloves, and anything can happen.

When Miocic first won the UFC heavyweight championship back in May of 2016, he kicked off what was a memorable run for Cleveland sports.

Weeks after Miocic’s title victory over Fabricio Werdum in Brazil, the then-Lake Erie Monsters swept their way to a Calder Cup Championship. Then, the Cleveland Cavaliers went on an historic run to erase a 3-1 deficit against the vaunted Golden State Warriors to secure the franchise’s first-ever NBA Championship.

Also, the Cleveland Indians made their first trip to the Major League Baseball playoffs in a four-year stretch and barnstormed their way to Game 7 of the World Series against the Chicago Cubs.

RELATED: Stipe Miocic to ESPN: Cleveland Browns are ‘making the playoffs’ this season

And Miocic would not mind one bit helping to kick off another championship run for Cleveland.

“I’m down for that,” Miocic said. “The Indians are doing well. The Browns, we see what they’ve got going on. Listen, there’s a lot going on here in Cleveland. It’s about time the city has something to be joyous about. We’re going to have a fun summer.

“I’m walking out with the belt wrapped around my waist. There’s no question. No question.”