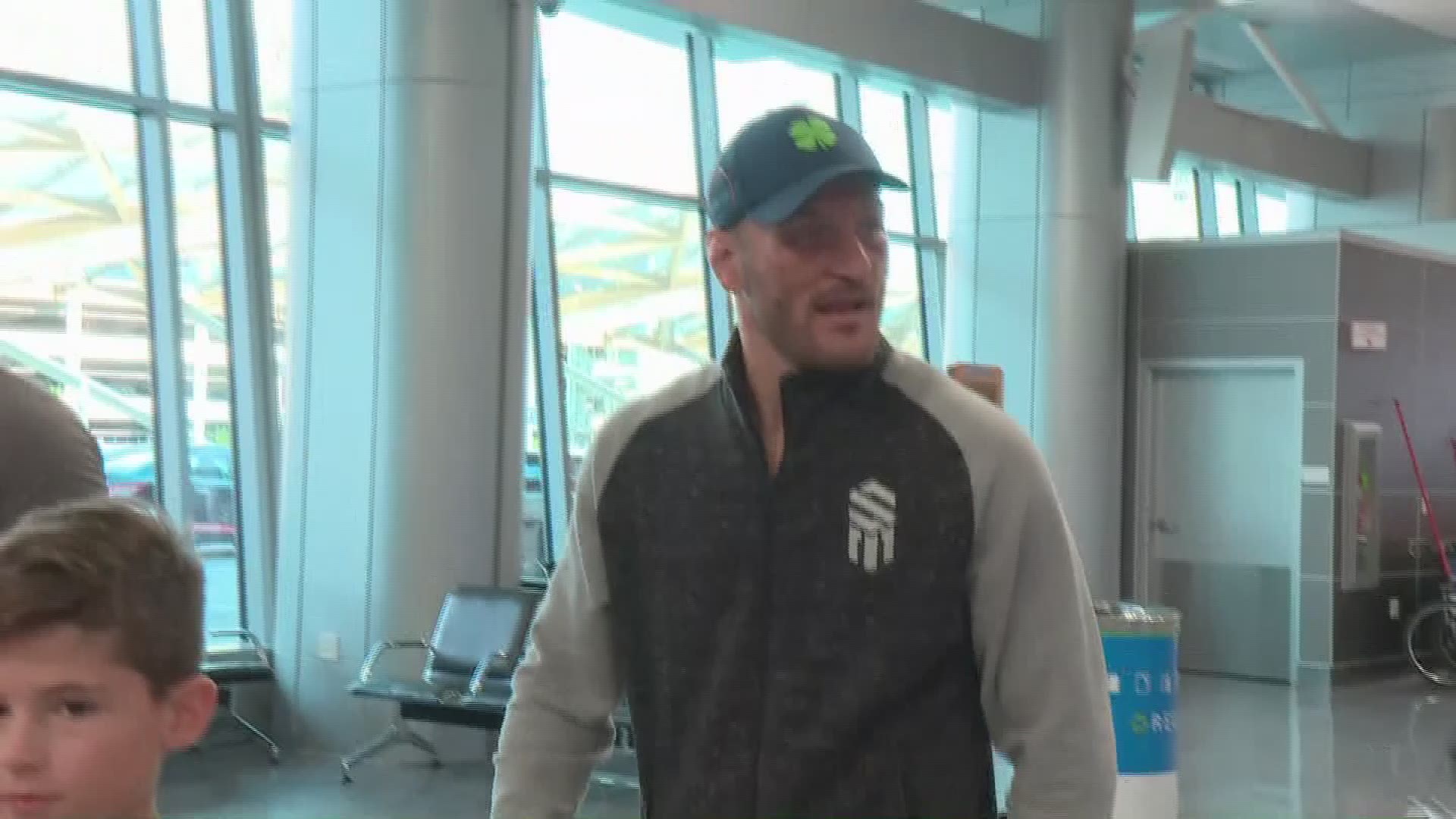 CLEVELAND — NOTE: Watch the video in the player above to see Stipe arriving at Cleveland Hopkins Airport Sunday evening.

It had been 13 months since Stipe Miocic last stepped into the UFC octagon, and after a slow start to his heavyweight championship rematch with Daniel Cormier, he found his range and earned a victory in the main event of UFC 241 at the Honda Center in Anaheim, California Saturday night.

Miocic became the first heavyweight fighter to hand Cormier a loss, and did so with a fourth-round technical knockout victory when referee Herb Dean stepped in and called a stop to the contest.

“It means a lot, honestly, because I had a little ring rust,” Miocic told WKYC.com after his title victory. “I didn’t think I did, but I definitely did. It was slow going in the first two rounds. The third round, it started to open up, and the fourth round, it kind of all clicked together.”

After struggling to find his range in the first three rounds, Miocic picked his spots during the fourth frame and was sticking and moving, engaging with punches, including multiple stinging left hooks to the right side of Cormier’s ribs, and getting out from in front of the defending champion before he could counter the strikes.

“I remember him every time I threw a punch, he would put his arms up,” Miocic said. “He’s got a bigger belly, and it was just a matter of time. I just had to do it, and one time, he tried to angle away, and I actually caught him right in the sternum, right in the solar plexus. That’s when I hurt him real good.”

Following a lead hook to the body late in the fourth round, Miocic landed a straight right hand to Cormier’s chin. That strike rocked Cormier and Miocic followed with a flurry of punches on the way to the finish. Miocic landed three right hands before connecting on three short lefts while putting Cormier against the cage.

As Cormier’s legs buckled and he fell to the mat, Miocic rotated several right and left-handed punches and forced the referee’s stoppage with 52 seconds remaining in the fourth round.

“I’ve really never seen him rocked before, so it’s hard to tell, but when I saw him stumble face first, I was like, ‘Oh, he’s hurt. Now, I’ve got to finish it,’” Miocic said. “I didn’t need to throw bombs. I was hitting him with everything, thank God.”

Heading into the fight, Miocic wanted to show his one-year-old daughter the importance of responding to adversity, and Meelah Claire was in southern California for fight week, even making an appearance to show support for her dad during the weigh-ins.

Although Miocic reclaimed the heavyweight championship in the shadows of one of the happiest places on earth, Disneyland, the family vacation is going to wait, as he, his fight team, wife (Ryan) and daughter are bringing the belt back to Cleveland.