NBC Investigation: Amazon's Ring isn't much of a crime fighter

A recent investigation by NBC News shows Ring cameras have not proven to be effective in making neighborhoods any safer following police partnerships. 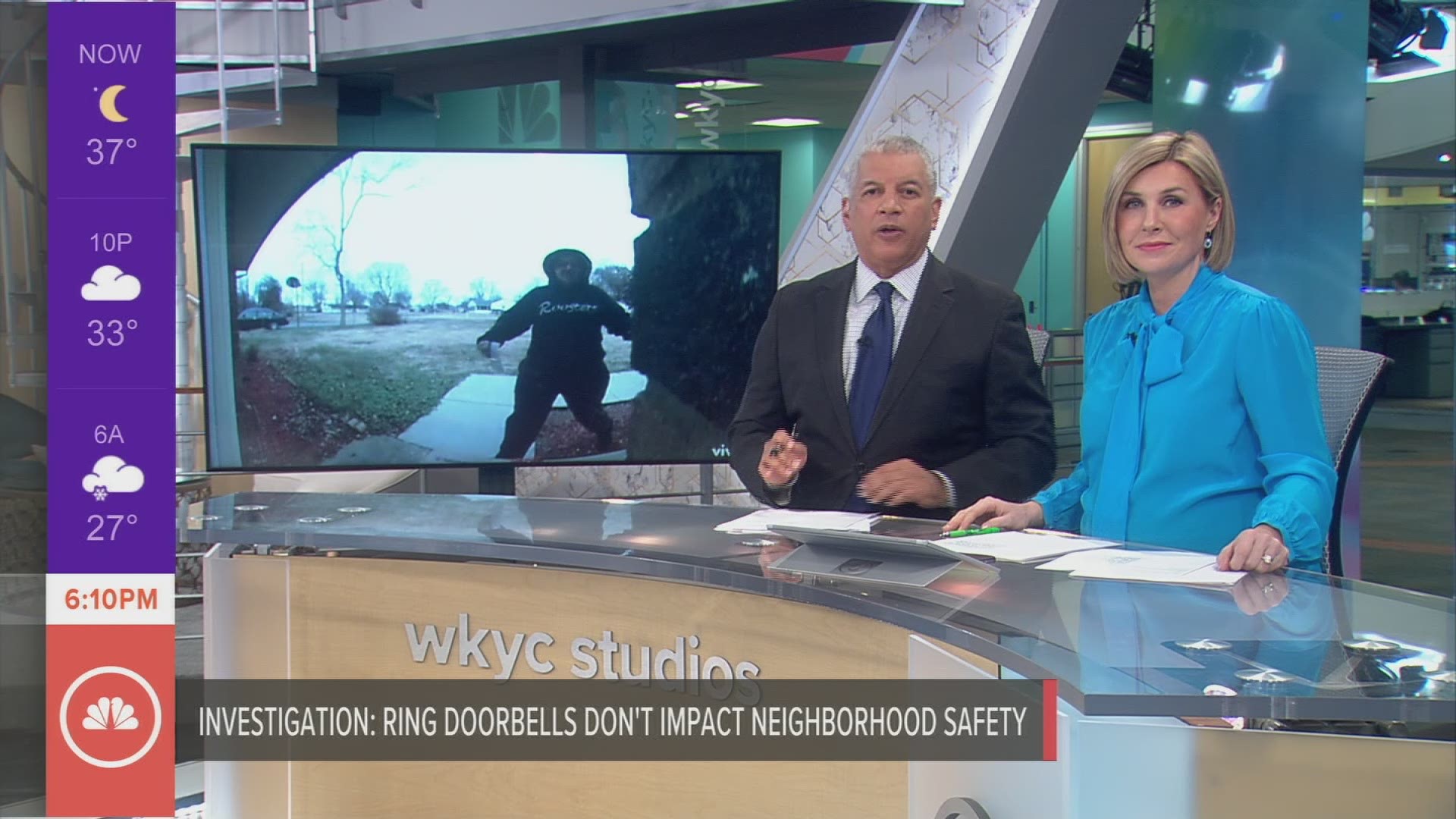 CLEVELAND — Since 2018, has partnered with more than 800 police departments across the country to help fight crime -- each department serving as a Ring "partner." Here in Northeast Ohio, 13 departments have signed up in the last year. Despite these new partnerships, there's little data to prove neighborhoods are safer - which Ring promises to do.

Ring, citing its own research, says an installation of its doorbell cameras reduces burglaries by more than 50 percent. But an NBC News investigation found — after interviews with 40 law enforcement agencies in eight states that have partnered with Ring for at least three months — that there is little concrete evidence to support the claim.

Locally, Rocky River Police Department has been a Ring partner since February 20, 2019. Since then, they've received footage from citizens only twice, and that footage has never been used to identify or apprehend a criminal.

Amherst Police say out of roughly 15 requests for footage, only twice has it been helpful in any way. But police there argue Ring is simply a tool that help police get the upper-hand and not a promise to stop crime.

In NBC's investigation, thirteen of the 40 jurisdictions reached said they had made zero arrests as a result of Ring footage. Thirteen were able to confirm arrests made after reviewing Ring footage, while two offered estimates. The rest, including large cities like Phoenix, Miami, and Kansas City, Missouri, said that they don’t know how many arrests had been made as a result of their relationship with Ring — and therefore could not evaluate its effectiveness — even though they had been working with the company for well over a year.

Because of the lack of data to support Ring's safety claims, watchdog groups like The Urban Justice Center believe the partnerships should be ended -- the reward outweighed by privacy concerns.

"It’s been disappointing just how many police departments were willing to support this software before they understood how it was being used, how their residents’ data was being collected," said Albert Fox Cahn, Executive Director of the Surveillance Technology Oversight Project at The Urban Justice Center.

"We’ve seen a lot of claims about how it reduces crime, with very little evidence. Sometimes those claims are getting walked back because the studies don’t support what we’re hearing from the companies."

As of late, Ring has been accused of increasing the number of partnerships with police for marketing purposes in mind. The partnerships have also sparked concern over how much user data police have access to along the way.

Aside from providing a false sense of security, Fox Cahn says there are other issues surrounding Ring's Neighbors app that allows users to share video with police and the community.

"It’s creating a lot of anxiety for people who are getting falsely labeled as a threat, simply because they’re trying to, for example, deliver a package," said Fox Cahn.

"It turns every person who comes toward your house into potential threat."

Privacy concerns aside, Ring’s deterrent effect is less powerful because its design is so discreet. And Research suggests most porch pirates are unfazed by the presence of camera. Two major problems for residents who are hoping the cameras make them homes more safe.

“If you expect the camera to deter people, you’re assuming that they see it and that they care,” Stickle, who served as a police officer in Bowling Green, Kentucky, told NBC News. “Those are two big assumptions.”