It is the second crewed launch of NASA astronauts aboard SpaceX's Dragon capsule. 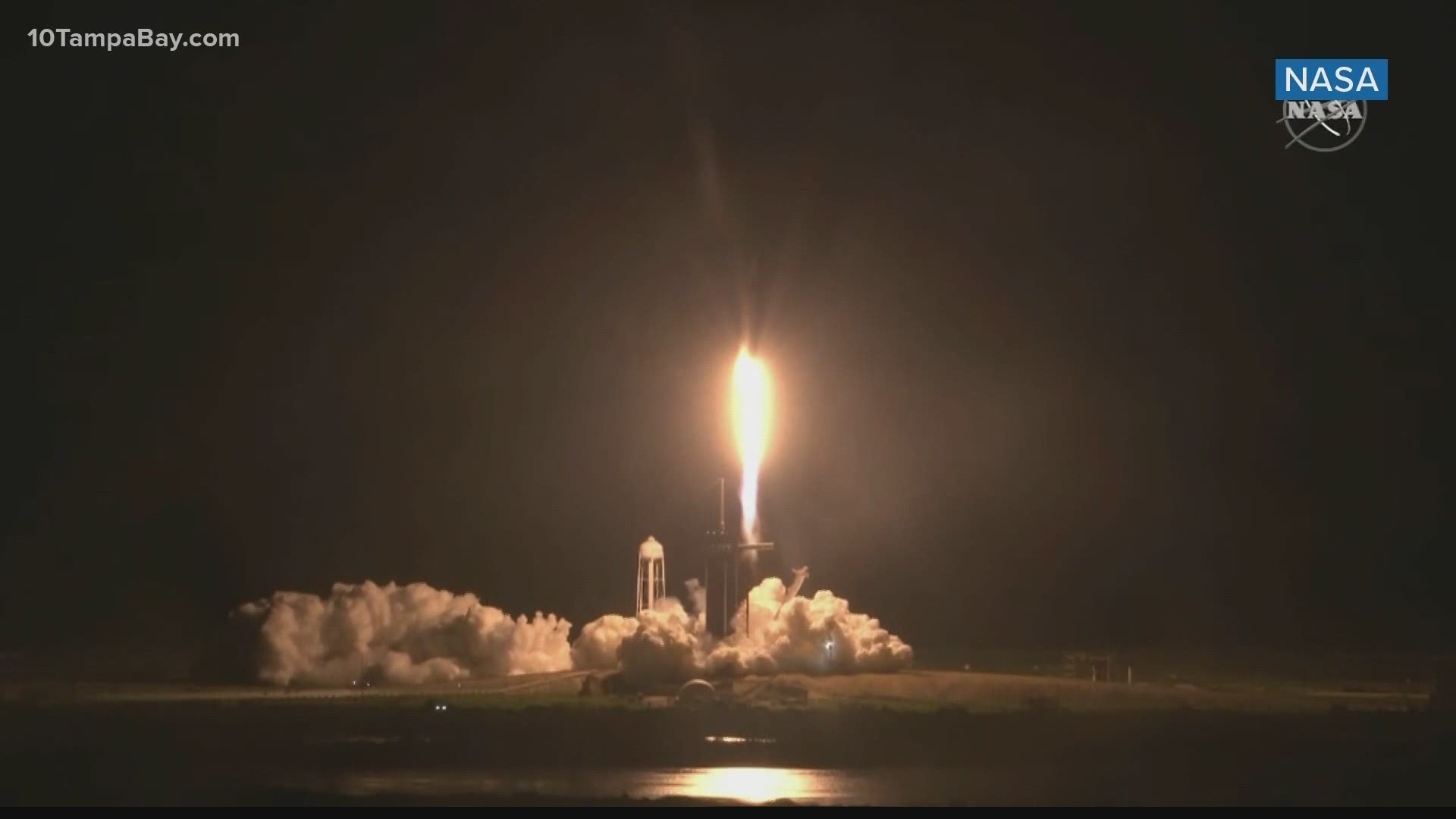 CAPE CANAVERAL, Fla. — Four astronauts have launched to the International Space Station from a historic launch pad at Kennedy Space Center in Florida.

NASA and SpaceX add to Launch Complex 39A's rich history with the launch of Crew 1, the second crewed launch of astronauts aboard the Dragon capsule.

It marks the first crew rotation mission of NASA's Commercial Crew Program and the second Dragon launch following the historic Demo-2 mission with astronauts Bob Behnken and Doug Hurley in May. It was the first time in nine years that American astronauts were launched to space from U.S. soil.

Live updates on the Crew 1 launch and docking at the space station:

Here's when to watch all the upcoming historic moments:

11 p.m. EST: Crew Dragon docks at the Harmony module of the space station.

Docking confirmed – Crew Dragon has arrived at the @space_station!

1:40 a.m. EST Nov. 17: The hatch opens and the crew gets a welcome ceremony to join the Expedition 64 crew already on board.

2 a.m. EST Nov. 17: NASA and SpaceX leaders plan to host a post-docking news conference to kick off the next leg of the Crew 1 mission.

Crew Dragon "Resilience is flying free after final separation. The astronauts will now continue their trek to the ISS.

The first stage has touched down on SpaceX droneship "Just Read the Instructions." The second stage is in orbit.

The first stage has touched down on the drone ship in the Atlantic Ocean and the second stage is now in orbit. #LaunchAmerica pic.twitter.com/T3pt355LXC

Stage 1 has separated. The @SpaceX Crew Dragon vehicle is on its way and the trajectory is nominal. #LaunchAmerica pic.twitter.com/H6ninRuwjJ

"Resilience rises," NASA and SpaceX have liftoff for the Crew 1 mission.

The Crew-1 mission has lifted off on a Falcon 9 rocket from @NASAKennedy at 7:27pm ET and is en route to the @Space_Station. #LaunchAmerica pic.twitter.com/5Q3uXSLvqt

We are three minutes out from launch!

The countdown is getting closer for the Crew 1 mission launch.

We are less than 20 minutes away from the launch of @NASA’s @SpaceX Crew-1 mission. 🚀🐉

Are you counting down with us? Watch live: https://t.co/Ct94x1Ai8c pic.twitter.com/LnXtCLM2bK

WE ARE "GO" FOR LAUNCH: The crew arm has retracted and propellant loading has begun. The launch is still set to go off on time.

Polls are complete. We are 'go' for launch. The crew arm is retracting and propellant loading will begin momentarily. #LaunchAmerica pic.twitter.com/5HuvmUVEWQ

SpaceX is sharing some background on the Dragon capsule's 22 flights to and from the International Space Station as the crew is just shy of an hour from launch.

Dragon has completed 22 flights to and from the @space_station. It was designed from the beginning with human spaceflight in mind – even the first cargo Dragon had a window pic.twitter.com/tpl7smjFhF

NASA astronauts Bob Behnken and Doug Hurley talk about what it's like to fly in the Dragon capsule ahead of launch. The duo was aboard the spacecraft for the historic Demo-2 mission back in May.

"It's indescribable to be a part of that type of event. We're just excited to see what's going to happen."@AstroBehnken and @Astro_Doug, the two @NASA_Astronauts who were aboard the #LaunchAmerica test flight preceding today's mission, share their thoughts: pic.twitter.com/tVBJoXDq0c

NASA and SpaceX report that the leach check has been passed and liftoff is still on schedule.

We have passed the leak check. ✅ Liftoff is still scheduled for 7:27pm ET. #LaunchAmerica pic.twitter.com/iUqPo0ZfEX

Foreign object debris was found in the seal of the hatch, according to the NASA TV live broadcast. Teams are working to re-seal the hatch now.

"We’re still on track for launch as teams troubleshoot to ensure the hatch is secure before liftoff. Keeping our #LaunchAmerica crew safe is our number one priority!"

We’re still on track for launch as teams troubleshoot to ensure the hatch is secure before liftoff. Keeping our #LaunchAmerica crew safe is our number one priority! https://t.co/cmklwtwzns pic.twitter.com/UvGJ6vPRB4

Troubleshooting has begun on the Dragon capsule as teams take a look at the hatch seal. There is roughly a 10-minute window to examine the area before the hatch needs to close once again.

We are re-opening the hatch to perform a leak check. Stay tuned for updates. #LaunchAmerica pic.twitter.com/g3BOVvcbZk

Launch configuration comm checks are being conducted with the crew ahead of rotating all four astronauts into position for launch.

The crew has arrived and made their way to the "white room." All four astronauts took a moment to sign the wall before being loaded into the Dragon capsule to prepare for liftoff.

Take a peek at the crew making their way through the crew access arm and adding their signatures to "the white room." #LaunchAmerica pic.twitter.com/nySGwC47H0

Here they come: Astronauts flying on the Crew 1 mission have walked out of the historic Kennedy Space Center's doors to say their goodbyes with family. Due to the coronavirus pandemic, all had to be socially distanced.

As the crew walks out of the historic @NASAKennedy doors, they are greeted by their families in a socially-distanced manner before they head to Launch pad 39A. #LaunchAmerica pic.twitter.com/6NlkUasZFl

It's time to suit-up! NASA astronauts Michael Hopkins, Victor Glover and Shannon Walker and JAXA mission specialist Soichi Noguchi are going through the steps of putting on their spacesuits.

The Crew Dragon spacecraft "Resilience" and Falcon 9 rocket are currently powered on. Weather officers are still showing 50% "go" for launch.

The Falcon 9 rocket and the Crew Dragon spacecraft "Resilience" are currently powered on. Weather officers from the @45thSpaceWing say that the weather is currently looking 50% 'go' for launch today. pic.twitter.com/rcm3EzJSZl

Here is a look at tonight's timeline for the first crew rotation mission of NASA's Commercial Crew Program.

Scattered showers -- and any electrical charges from nearby thunderstorms -- could threaten today's launch. There remains a 50-percent chance for "go" conditions.

Who else is ready for tonight’s rocket launch?! @NASA @SpaceX Crew-1 mission is scheduled to liftoff at 7:27 p.m. But weather conditions are looking 50% favorable. One of several factors to consider...rain near launch site at time of liftoff! #10Weather @10TampaBay pic.twitter.com/CmyJNiIKNJ

"All systems are go" for tonight's Crew 1 mission launch as of approximately 10 a.m. Teams are keeping an eye on the weather though as conditions are 50% favorable.

All systems are go for tonight’s launch at 7:27 p.m. EST of Crew Dragon’s first operational mission with four astronauts on board. Teams are keeping an eye on weather conditions for liftoff, which are currently 50% favorable → https://t.co/bJFjLCzWdK pic.twitter.com/GTpvVAiLkK

Good morning to the Crew Dragon spacecraft on launch day! Blast off is set for 7:27 p.m. EST tonight.

.@SpaceX's Falcon 9 rocket and Crew Dragon spacecraft are seen at sunrise on launch day. @Astro_illini, @AstroVicGlover, Shannon Walker, & @Astro_Soichi are scheduled to launch to @Space_Station on the Crew-1 mission from @NASAKennedy at 7:27 pm ET. More📷https://t.co/6OY3kX0Dni pic.twitter.com/9w9TYSlYie

NASA announced that due to onshore winds and recovery operations, the agency and SpaceX are now targeting 7:27 p.m. Sunday, Nov. 15, for the Crew 1 launch.

Risks to booster recovery at sea are low, according to the 45th Weather Squadron forecast.

Update: Due to onshore winds and recovery operations, @NASA and @SpaceX are targeting launch of the Crew-1 mission with astronauts to the @Space_Station at 7:27 p.m. EST Sunday, Nov. 15. The first stage booster is planned to be reused to fly astronauts on Crew-2. #LaunchAmerica

Weather is looking good for Saturday’s launch. The primary weather concerns for the launch area will be some cumulus clouds and possibly some lingering precipitation associated with Tropical Storm Eta.

NASA will also monitor weather conditions downrange to account for conditions for SpaceX's "Just Read the Instructions" droneship, where the Falcon 9 first stage will attempt to land after launch.

The official forecast from the 45th Space Wing calls for a 70 percent chance of favorable weather conditions for liftoff. The 7:49 p.m. EST Saturday, Nov. 14 weather is expected to see partly cloudy skies with 7 miles of visibility.

A few isolated showers will be possible. The cloud tops will be no more than 8,000 feet. The temperature will be a very comfortable 78 degrees.

Crew 1 rehearses for launch day by heading to the Neil A. Armstrong Operations and Checkout Building to don their black-and-white SpaceX spacesuits. They then took the elevator down to the ground level and exited through the historic double doors to get in their NASA-themed Tesla Model X cars, which will take them on the 20-minute ride to the launch pad.

The rehearsal ended with a go/no-go poll for Falcon 9 propellant fuel loading, which on Saturday will happen 45 minutes before launch.

Crew 1's Falcon 9 rocket underwent a static fire test, which means the rocket briefly fired its engines while being tied down. It was a test to make sure the rocket will perform as programmed during liftoff.

SpaceX also shared a video of the crew access arm swinging into place to let the crew into the Dragon spacecraft.

Crew Dragon Resilience, atop its Falcon 9 rocket, reached its launch pad ahead of Saturday's launch attempt.

Falcon 9 and Crew Dragon vertical on Launch Complex 39A pic.twitter.com/hBVUHWv3Ab

NASA and SpaceX teams conducted a flight readiness review for the Crew 1 mission. It focused on the preparedness of SpaceX's crew transportation system, the International Space Station, and its partners to support the flight.

Crew 1 arrived at Kennedy Space Center for final preparations ahead of the Nov. 14 launch. NASA and JAXA leadership greeted the crew after they landed at the Launch and Landing Facility at KSC from Johnson Space Center in Houston.

“On behalf of the crew of Resilience, on behalf of our families, we want to say a big ‘thank you’ to all of the people at SpaceX, at NASA, and in the (Department of Defense) who have been working tirelessly to get us to this point. It’s really been an incredible effort by an incredible group of people,” Hopkins said. “As for the crew: we’re ready.”