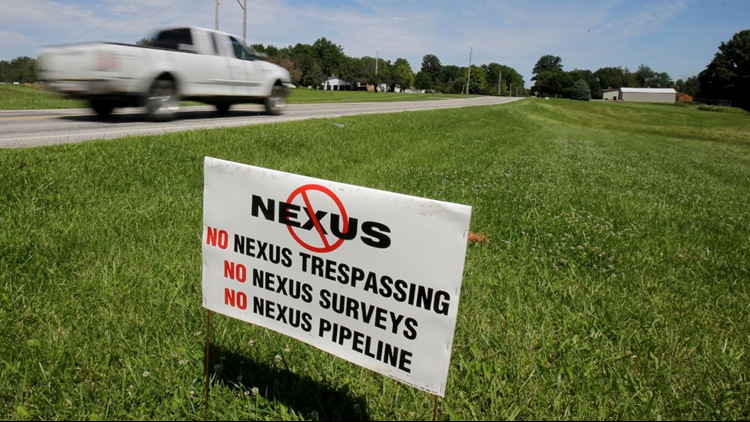 Photo by: AP
FILE - In this Thursday, July 16, 2015, file photo, a truck passes a sign against Nexus on the property of Kathy Cikotte, in Berlin Heights, Ohio. An Ohio city and others are asking federal appeals judges in Washington to rule that their property was illegally seized to build a $2 billion pipeline that sends large quantities of natural gas to Canada. (AP Photo/Tony Dejak, File)

GREEN, Ohio (AP) — Landowners in Ohio hope to convince a federal appeals court that they were forced by a federal agency to sell their property to a pipeline builder sending large quantities of natural gas to Canada.

At issue is the Federal Energy Regulatory Commission's approval of a project that allowed for the use of eminent domain to build of the 256-mile-long (412-kilometer-long) NEXUS Gas Transmission pipeline across northern Ohio and into Michigan that went into service in October.

A three-judge panel from the U.S. Court of Appeals for the District of Columbia heard oral arguments May 6 on a petition filed by the city of Oberlin, Ohio — one of the communities the pipeline crosses — and a group called Coalition to Reroute Nexus. The petition seeks to have the regulatory commission reconsider the certificate it granted to build the pipeline.

The panel is expected to rule in the next several months.

The opponents' main argument is that the commission approved an interstate pipeline, which allows for the taking of property through eminent domain, when it should have considered it an export pipeline for which eminent domain is not permitted. Eminent domain allows a government to seize private property, with compensation, for a public use.

Carol Banta, an attorney for the regulatory commission, argued that most of the gas being shipped through the pipeline will be consumed in the U.S. She said some of the gas being sent to southern Ontario's Dawn Hub could be sold back to the U.S.

The pipeline is a partnership between Calgary, Canada's Enbridge Inc. and Detroit's DTE Energy.

Banta told the panel that 93% percent of the pipeline was built without using eminent domain, a figure she called "unusually large."

Judge Robert Wilkins responded: "Even if it's 1% of eminent domain needed, that's someone's property being taken, and that raises constitutional issues."

NEXUS took dozens of property owners to federal court to build the pipeline. The last settlement was reached last week with Elaine Selzer, a resident of Green, Ohio, which the pipeline also passes through. Selzer, a petitioner in the appeals court case, said she is not allowed to divulge the amount she and her family were paid for roughly 2 acres (8,000 square meters). She has told The Associated Press that months ago she rejected NEXUS' initial offer of $100,000.

Selzer said she's still unhappy but was advised to take the money because the case could drag on for years.

"I'll never be satisfied with what they did to me," Selzer said. "I'd have liked to have taken it all the way to the Supreme Court if I could."

Adam Parker, a NEXUS spokesman, said in a statement that the Enbridge-DTE partnership worked with property owners for four years.

"Great effort has been taken to address individual landowner concerns and minimize disruption during the construction process," Parker said.

David Mucklow, another attorney for the opponents, hopes the court will order the pipeline shut down if it rules in their favor. Elefant said that is not likely.

"Our best-case scenario is that this gets sent back to FERC to explain itself," she said.

The pipeline required just .2 acres (800 square meters) of city owned property in Oberlin, the home of a highly regarded liberal arts college. The city finally settled after a protracted eminent domain fight. A portion of the pipeline in a neighboring township sits just 50 feet (15 meters) from the backyards of Oberlin residents and well within the blast zone should it ever explode, city Law Director Jonathan Clark said.

The coalition that joined in the filing first tried to get NEXUS to move the pipeline away from populated areas like Oberlin and Green, which is outside Akron. When that was unsuccessful, the coalition tried to stop FERC from approving the project altogether.

"I want the companies to use common sense about where they build these things," said Paul Gierosky, who helped found the coalition and who lives in Medina County, which the pipeline also passes through. "They get to use eminent domain and FERC approves every application they get. What kind of process is that?"

RELATED: Landowners alongside Ohio pipeline file lawsuit against it