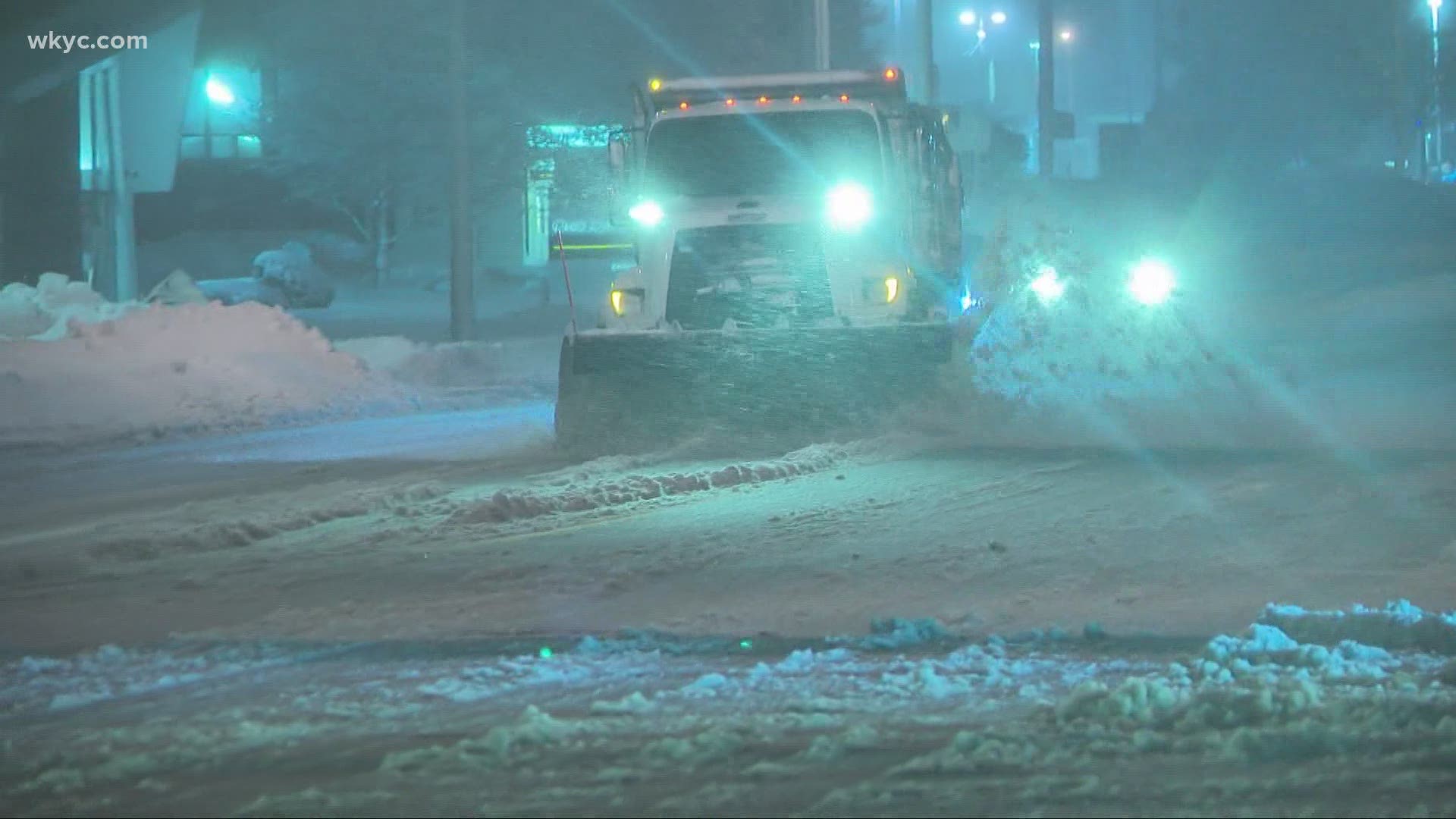 CLEVELAND — It's looking like a winter wonderland out there! We've got some accumulating snow moving through Northeast Ohio.

Below you'll find time-stamped updates as the snowflakes WERE flying throughout Northeast Ohio. The most-recent updates are located at the top of the post below...

INTERACTIVE RADAR: Track the conditions in your area

8:39 a.m. A snow parking ban has been activated in Parma. "There is no parking on city streets until further notice," city officials said in a press release.

8:18 a.m. Heavy traffic is impacting drivers on I-77 South approaching the Akron-Canton Airport due to a crash.

Left two lanes blocked on I-77 SB after Lauby Rd in Stark County due to a crash. @wkyc

7:05 a.m. How much more snow can you expect today? Our team highlights the updated weather conditions in today's edition of the "On the GO!" 3News morning aftershow:

6:45 a.m. With all this wintry weather, tomorrow is Groundhog Day. Do you think Punxsutawney Phil will predict an early spring or six more weeks of winter?

Snowy, cold, but roads are clear here in Cleveland. Be careful out there. #3weather .@wkyc pic.twitter.com/WWGeGjclUj

6:07 a.m. The roadways are slow in spots. Here's another crash as reported by 3News' Danielle Wiggins.

Crash reported on the I-271 SB ramp to I-480 EB as you're moving from Macedonia into Twinsburg. @wkyc

5:47 a.m. I-77 North has reopened at Portage Street in Stark County after it was closed earlier this hour due to a crash in which an overhead sign was damaged.

As of 5 a.m. 93 crews are out in eastern Ohio plowing and treating roads. Allow yourself extra travel time for your morning commute. Give our trucks plenty of room to work out there. #ODOTwinter pic.twitter.com/RfCfdityCk

4:45 a.m. There are a handful of school closings / delays today due to the snowy conditions. See the updated iAlert school closing list HERE.

As of 4:30am, we have more than 1,240 crews across a the state patrolling, treating, and plowing roadways this morning. This is the view from one of them on SR 138 in Ross County. Plan ahead and allow extra time for travel and give our crews plenty of room to work. #ODOTwinter pic.twitter.com/3hysNbmzvc

4:30 a.m. Only a handful of counties remain under a Winter Weather Advisory. These include Carroll, Columbiana and Tuscarawas, which will continue until 6 a.m. Tuesday.

Over 65 plow trucks on the roads tonight in District 12. Slow Down and remember plow trucks travel below the posted speed limit. Check out this picture from I-480. #ODOTWinter pic.twitter.com/eUe1Vp5zfp

So, how long will this snow last? How much can you expect in your area? What are the conditions like right now? We've got you covered! Explore the post below to see the latest time-stamped updates on how the wintry weather is evolving throughout the day. Be sure to refresh this page often because the most-recent information will appear at the top of this story.

7:15 p.m. Erie, Lorain, Summit and Medina counties have been added to the WINTER WEATHER ADVISORY until 10p tonight.

6 p.m. 3News Meteorologist Matt Wintz says that snowstorms moving into the area could cause "several inches" in the next few hours and overnight.

5 p.m. Snow is beginning to pick back up across Northeast Ohio. The National Weather Service of Cleveland is reporting "numerous crashes" on 1-71 near Mansfield. "Remember to take it slow during Ice and Snow. Even a little bit of snow can cause big problems!"

1 p.m. ODOT reports that there are still more than 900 crews out on the road. The transportation bureau describes conditions as "mostly running wet."

11:45 a.m. The Ohio Department of Transportation (ODOT) says that it currently has more than 969 crews out plowing and salting around the state. "Please continue to give our crews plenty of room to work and be extra alert for quickly changing conditions on the road. #ODOTwinter"

10:30 a.m. 3News meteorologist Jason Frazer offers a live update on what to expect from the wintry weather for the rest of the day.

10:20 a.m. Here's a note from 3News meteorologist Jason Frazer: We are getting a break from some of the snow showers that we saw from earlier this morning. This was expected. We will see the snow threat ramp up within the next two hours, especially for areas south of Medina.

We could see some snowflakes transition into rain or freezing rain in spots like Cleveland and along Lake Erie as temperatures briefly increase above the freezing mark. By this evening, however, everyone will see snow.

While ODOT crews continue to stay ahead of the storm, we are seeing some spots where speeds are being reduced 10-20 mph, especially south of Canton. Stay safe!

As of 9:15am, we have 1,063 crews out across the state, including this plow on SR 235 in Logan County. Please continue to give our crews the room they need to work. Get updated travel conditions at https://t.co/ulNKKYK5kb. #ODOTwinter pic.twitter.com/ZSM3QDjxza

9:12 a.m. We're having some fun with the snow this morning by hitting the slopes at Boston Mills / Brandywine ski resort this morning!

8:30 a.m. A note from 3News meteorologist Jason Frazer: The farther inland you are, the more likely you will see more snow today. Many of us are waking up to see a coating to 2 inches on our cars and back yards. A few flurries falling across Northeast Ohio continue to fall, including places like Medina, Wooster and Bailey Lakes.

This will not be a continued widespread snowfall like we saw in December. It will be on and off again. Big concern continues to be for the roads. There have been several accidents already reported. We continue to see pockets of I-71 in Mansfield and I-77 between Canton and New Philadelphia where speeds are reduced 10-20 mph. This is due to the snowfall.

While ODOT does have more than 1,200 crews throughout the state working to clear the roads, there are some slick spots being reported. If you don't have to go out today, we would advise to stay inside. If you do need to go out, remember to reduce your speed by 5-15 mph and don't crowd the plow.

Black ice will continue to be a concerns because temperatures will hover below the freezing mark.

8:01 a.m. Here's an updated look at how much snow we're expecting through Monday:

We continue to see some light to moderate snowfall across NE Ohio. So how much more can we expect today? Here's a look at the updated snowfall totals. #Cleveland #Akron #Canton #Weather #Winter #Sunday pic.twitter.com/sAOyxnhVd0

7:52 a.m. A peek at the snow in portions of Ohio -- including a peek at conditions in Toledo and Mansfield:

Snow continues to fall in the northern portion of Ohio. https://t.co/y2mdfibYhI images from Freemont, Mansfield, Wayne Co, and Belmont Co. show some slick conditions possible, so be extra alert if you're driving this morning. If you can, stay home. #ODOTwinter pic.twitter.com/vSGvswamvj

7:48 a.m. Snowy in Carrollton! Thanks to @mawhales for sending us the photo!

Hello snow! Thanks to @mawhales for the photo of her yard in Carrollton, OH. More snow is on the way. #WX #Weather #Canton #Akron #Cleveland #Weather #Sunday pic.twitter.com/QzWvXsszHQ

From SR 772 in Ross County to SR 2 in Erie County, we have 1,148 crews out across the state as of 7:30am. Please continue to give them plenty of room to work as they clear state and US routes outside municipalities and all interstates. #ODOTwinter pic.twitter.com/ZGctBFqxKY

7:30 a.m. A viewer sent us this snowy photo from Vermilion:

7:07 a.m. Here's a look at the snowy conditions in Stark County.

6:50 a.m. ODOT says there are 92 crews working to clear the snowy streets in the eastern portion of Ohio.

Good Morning! As of 6:50 a.m. 92 crews are out battling snow and ice in eastern Ohio. If you have to go out this morning, allow extra travel time, and give our trucks plenty of room to work. Ice and Snow, Take it Slow! #ODOTWinter pic.twitter.com/62eQZOL9BA

Already seeing snow on the ground in places in Akron, OH. We are seeing speeds reduced down to 35 mph. Stay safe this morning. #Weather #Akron #Traffic #Sunday pic.twitter.com/znvvn5rsoj 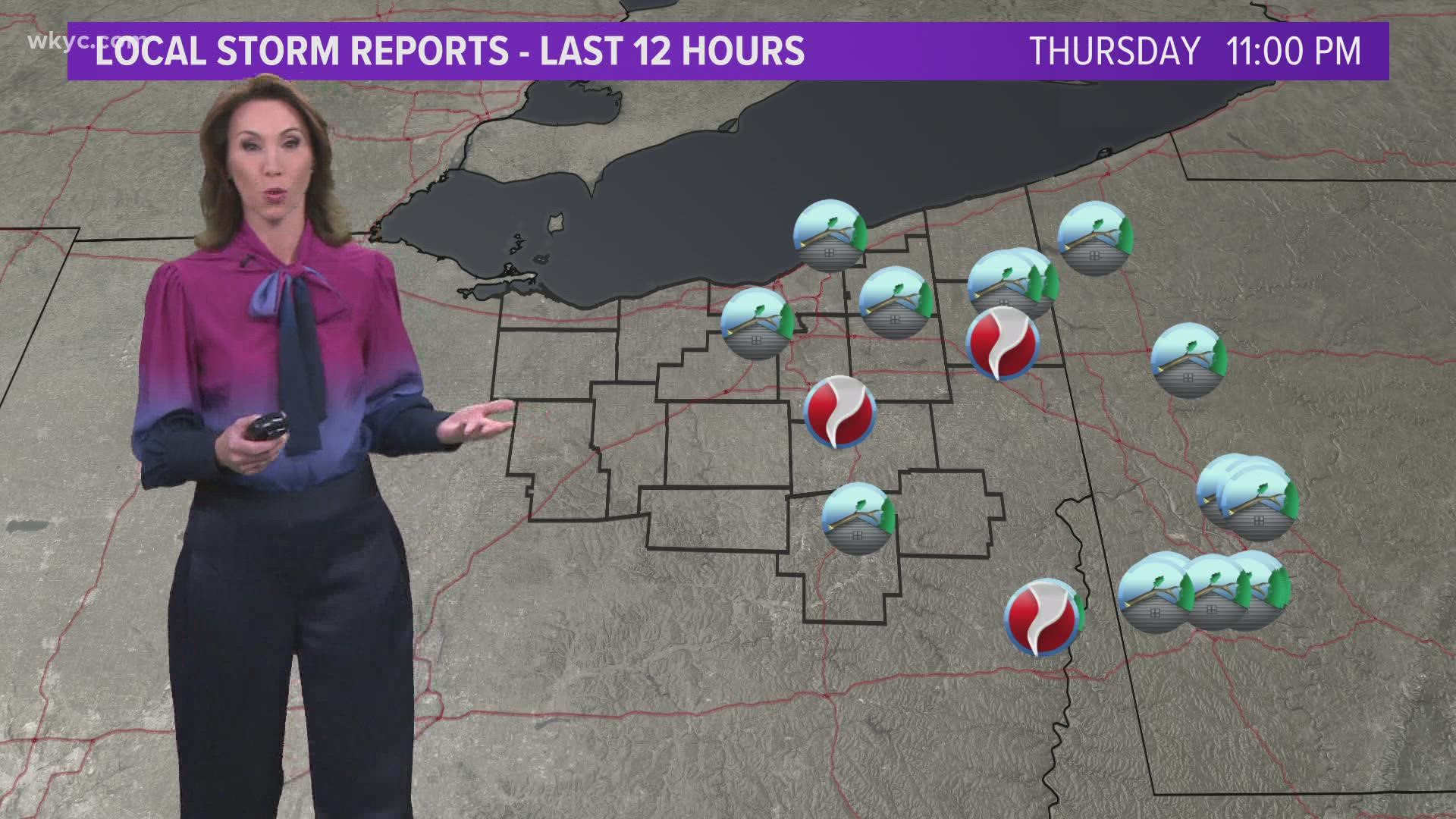