'I was just sitting there trying to keep warm': Bernie Sanders responds to incredible mitten memes

Here are 16 versions of the Bernie Sanders meme that was generating smiles on social media this week.

There was a lot to see at the socially-distanced inauguration of President Joe Biden and Vice President Kamala Harris. From a star-studded line-up of performers to former presidents like Barack Obama and George W. Bush to the inspirational poetry of 22-year-old Amanda Gorman. Yet, memes of Bernie Sanders keeping cozy in his signature brown coat and his now-famous mittens have taken over social media.

His practical clothing choices for the inauguration were instantly meme-ified after the original photo was published. Speaking on Jan. 21 on Late Night With Seth Meyers, the United States senator from Vermont said he had no idea his sartorial style would ignite worldwide attention.

"I was just sitting there trying to keep warm, trying to pay attention to what was going on," he told Meyers. 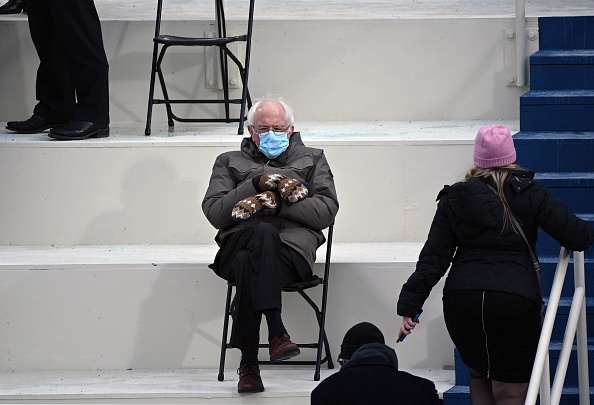 Keeping warm was the name of the game during the inauguration. The Washington Post reports it was the windiest inauguration since President Reagan's second inauguration in 1985. Snow flurries drifted down during Minnesota Sen. Amy Klobuchar's remarks, prompting Missouri Sen. Roy Blunt to joke, "I should've known when Sen. Klobuchar got involved there'd be a touch of snow this morning," in a nod to her snowy presidential campaign announcement in February 2019.

According to official measurements taken at Reagan National Airport on Wednesday, the high temperature reached 46 degrees in the nation's capital, which is fitting considering that Joe Biden is the 46th President of the United States.

While Sanders said the inauguration brought a tear to his eye, the rest of the world has been shedding tears of laughter over the various memes the moment produced.

"While the day belonged to Mr. Biden, the meme served as an amusing sideshow," The New York Times noted. "Amid the dark suits and bright coats dotting the Capitol steps, Mr. Sanders was photographed sitting masked, cross-legged and bundled up in a bulky coat and mittens against the frigid weather in Washington, D.C. Soon after, the image, taken by the photographer Brendan Smialowski for Getty Images, began to circulate on social media inserted into a wide array of photographs and scenes from movies and artworks."

Sanders told Meyers the best part about the mitten meme explosion is the woman who made the mittens.

"What was really nice is the woman who made the mittens lives in Essex Junction, Vermont. She is a schoolteacher and a very, very nice person. She has been somewhat overwhelmed by the kind of attention that is being shown to her mittens," Sanders said.

Jen Ellis is second-grade teacher who made gloves on the side. She said she sent Sanders a pair after he lost a bid for the Democratic presidential nomination in 2016 and was surprised to see him wearing them.

Ellis tweeted that the mittens were made from repurposed wool sweaters and lined with fleece. She explained the inside liner is made from recycled plastic bottles and told Good Morning America that all of the attention has been a shock. The mittens were "something I made in my craft room with the sewing machine my mom gave me when I was 12 years old made it to the national stage, so I was just flattered."

Sanders, who is certainly used to the national spotlight, has taken it all in stride. In an interview with Gayle King on CBS, he said it's all about keeping warm.

"In Vermont, we dress, we know something about the cold ... And we're not so concerned about good fashion. We just want to keep warm. And that's what I did."

Here are some of the internet's favorite mitten memes:

I don't know about you, but this is the winner for me. pic.twitter.com/4e3B0N60N1

I couldn’t help but wonder.... if I dated a leftist, would that be right? pic.twitter.com/hyxn8qrCP8

"I am once again asking you to complete the Kessel Run in 12 parsecs." #berniemittens pic.twitter.com/DGhoBWEhTI

Can someone explain to Bernie that is not how you wear a toque? pic.twitter.com/OoG3l9K7gK

Streetsboro firefighter on surviving cardiac arrest: 'The outpouring, it's been really incredible'