Follow along with real-time updates as the snow and colder temperatures move throughout Northeast Ohio. 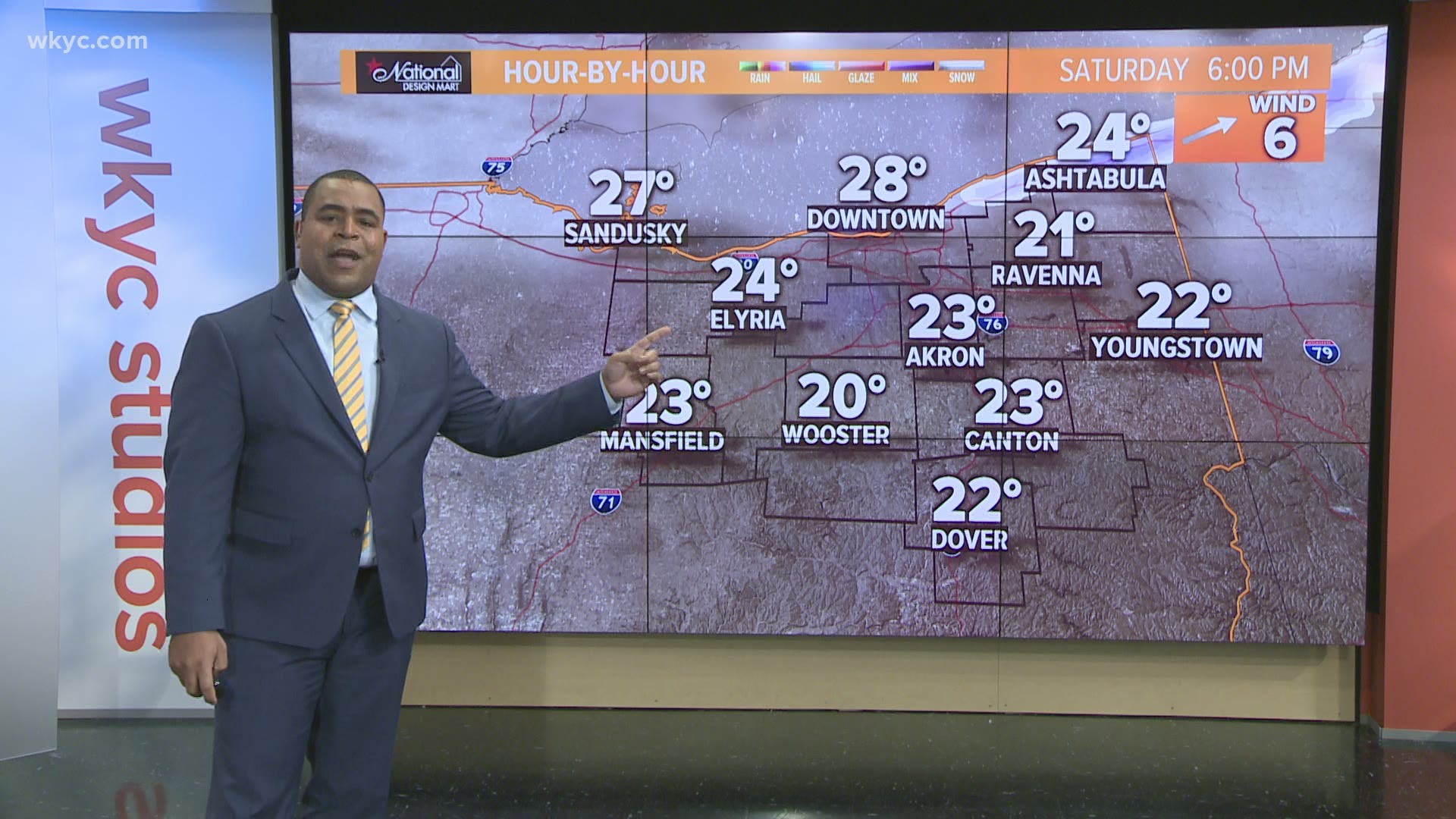 Below are time-stamped updates of how the winter storm is impacting Northeast Ohio. Be sure to refresh this page frequently for the latest updates, which will appear at the top of the blog below.

LIVE RADAR: Track the snow in your area

10:28 p.m. The winter storm warnings and advisories have expired for all of Northeast Ohio. However, the cleanup continues.

3:30 p.m. Lake snow bands are shifting northward as the wind backs around to a more southwesterly direction.  This will mean east to west orientation of the snowbands.  Eastern Cuyahoga, Lake, northern Geauga and Ashtabula county will continue to see lake snow overnight and into early Saturday.  As usual, additional accumulations depends upon where bands persist, but another 3" to possibly as much as 8" will be possible, with the highest additional amounts farther east.  Winter storm warnings continue for the primary snowbelt until 7 a.m.  All other alerts have expired. (BK)

3:10 p.m. Meteorologist Matt Standridge has an update on weather conditions, watch his mini report in the player below.

11:30 a.m. ODOT says it has more than 800 crews on the road statewide. They are asking that driver giver their employees "plenty room" to successfully to their jobs.

As of 11:30am, we have 817 crews, including this plow on SR 41 in Ross County, out plowing and treating roadways across the state. Please give them plenty of room to work. #ODOTwinter pic.twitter.com/BNZOkns000

10:24 a.m. The City of Lorain has issued a parking ban effective immediate and will remain in effect until further notice.

Wishing everyone a safe and happy holidays! pic.twitter.com/I6H02BOjPZ

9:30 a.m. The city of Warrensville Heights has also issued a parking ban. The ban will remain in effect until Saturday, December 26 at 6 p.m. Parking of vehicles upon any and all city streets are prohibited, and any vehicle parking in violation shall be towed and charged in accordance.

9:24 a.m. The City of Cleveland has issued a parking ban. The ban will remain in effect until Saturday at 8 a.m.

8:20 a.m. A before and after look at downtown Cleveland following roughly eight inches of snowfall in 16 hours.

WOW! What a difference a night can make! Snow came just in time for a white Christmas. 16 hours later and we have roughly 7-8 inches downtown. We'll near a foot later today with even more in the lake-effect snow belts. #OHwx #3Weather pic.twitter.com/dlxuhpoWCW

8:13 a.m. Winter Storm Warning remain in effort for much of the 3News viewing area.

8:10 a.m. The City of Parma has placed a Snow Emergency Parking Ban in effect until further notice. There is no parking on any streets within the city.

7:50 a.m. ODOT says it has more than 800 crews working on roads across the state. They're asking for people to stay home if possible.

Even with more than 800 plows out, it’s a slow go where heavy snow is or has fallen. If you can stay home, please do. If you are out, expect hazardous conditions and give our crews plenty of room to work. #ODOTwinter pic.twitter.com/JTBFPQBjKM

7:15 a.m. Meteorologist Matt Standridge has a look at the seven to eight inches that fell in downtown Cleveland overnight.

6:40 a.m. Lindsay Buckingham gives us a look at her very White Christmas this morning.

⚠️A Winter Storm Warning has been issued for Lorain and Medina counties. Heavy snow is occurring. Additional totals of 3 to 5 inches with rates in excess of 1" per hour can be expected over the next several hours. #LorainOH #MedinaOH #ohwx pic.twitter.com/37eJUCL8sp

11:23 p.m. Mark Naymik checked in with ODOT to see how the crews are progressing as the roads continue to be treacherous throughout Northeast Ohio.

11:12 p.m. Here's an update on how the winter storm is progressing with Meteorologist Matt Wintz:

9:56 p.m. Photojournalist Kelly Matter checks in with some images of the snow at Crocker Park in Westlake:

9:35 p.m. Let's check in with the good people from ODOT for a look at how crews are making out tonight in Akron and areas east and south of Cleveland.

8:50 p.m. Here's how things look out on the roadways in and around downtown Cleveland with photojournalist Sean Forester. As he says, if you don't have to be out there tonight, please stay home.

If you don’t have to drive, please don’t. It’s nasty out. This video was from my drive into the city on 90E. #ohwx @wkyc @wkycweather @WintzWeather @BetsyKling pic.twitter.com/FiWzm9fZbM

8:11 p.m. Meteorologist Matt Standridge shot some video of the conditions in downtown Cleveland.

Snowy downtown Cleveland! More inches will fall overnight. Roads are slick so be careful! You may need to travel by sleigh... #ChristmasEve #OHwx #3Weather pic.twitter.com/cTwM3zBaxr

8:00 p.m. Meteorologist Matt Wintz is giving us a detailed look at the snow making our way across the area now on Facebook Live

6:58 p.m. According to Meteorologist Matt Wintz, look for the next wave of snow to start moving in. The heaviest may occur between now and 1-2 a.m.

SNOW PICKING BACK UP:

Our next wave of snow continues to move in with some of the heaviest snow expected between now and 1-2am as the low pressure moves by. While not everyone will see heavy snow, we could see 1-2 in/hour rates in some of the more robust bands. #3weather #wx pic.twitter.com/MfVjD8EAao

6:45 p.m. The National Weather Service has issued a Winter Weather Advisory for Ashland and Richland counties, along with Knox County.

⚠️A Winter Weather Advisory has issued for Ashland, Knox, Richland counties. Snow accumulations of 3 to 5 inches can be expected across these counties through 6 am Friday morning. #Manfield #Ohwx pic.twitter.com/OUSZ8ieSkb

Also, photojournalist Sean Forester shared this video of conditions on the west side:

5:17 p.m. Here's the latest from ODOT as plow crews work to keep the roads safe. There are reports of accidents around Northeast Ohio, so please take it slow and be careful if you have to be out.

Over 70 plow trucks out in District 12 this evening. Slow down and drive per the road conditions. Check out these pictures! Thank You plow drivers for spending your Christmas eve on the roads!! #ODOTwinter #ODOTworks pic.twitter.com/YJ1kNMdRgn

3:57 p.m. Visibility will be a huge concern when you are driving.

Hey folks. We are going to start to see the visibility go down across NE Ohio within the 2 hours. Big concern is going to be for the roads. If you don't have to go outside, please don't. White Christmas is definitely here. You are welcome Ohio. 😁 #Cleveland #WX #Weather #Akron pic.twitter.com/z4iBwCwSWZ

Roads are getting some accumulation in the snow belt... Thanks to WKYC’s @DJFerrante1 for sending this in. They’ll become slick tonight especially on bridges and overpasses all over eastern Ohio. #OHwx #3Weather pic.twitter.com/z64EMo34Z1

2:33 p.m. The snow is starting to accumulate in the downtown area.

2:30 PM | Downtown will be white after sunset. The @CLEPublicSquare is starting to get some accumulation on the landscaping. #OHwx #3Weather pic.twitter.com/1lodKI87OM

Breaking News: Snow has arrived in Downtown Cleveland! Y'all ready for this White Christmas? Up to a foot of snow possible in Northeast Ohio! Tag me in your weather videos and pictures! #wx #Weather #Snow #Cleveland #Akron #Canton #Medina pic.twitter.com/OyDCHZlAdr

2 p.m. A parking ban has been announced for Warrensville Heights. It will be in effect from 6 p.m. Dec. 24 until 6 p.m. Dec. 26. "Parking of vehicles upon any and all city streets are prohibited, and any vehicle parking in violation shall be towed and charged in accordance," city officials said in a press release.

1:16 p.m. If you don't have to travel tonight, you can always hunker down and watch Santa Claus on his journey around the world with the NORAD Santa tracker.

12:55 PM | We are slowly making that transition to sleet and snow. It's misty downtown. Precipitation is light but heavy snow bands will fill in later this evening. Travel will become more difficult the rest of the day. Stay safe! #OHwx #3Weather pic.twitter.com/Wjnu39IEK5

Our storm system has shifted back west ever-so-slightly and the result will bring some of the heavier snow potential further west. Ranges will very greatly to the west. This all begins later this afternoon into Christmas Eve. #3weather #wx #OHwx @wkyc pic.twitter.com/mywyK6aejW

12:45 p.m. Here are the most recent weather alerts from the National Weather Service...

THE REST OF THE DAY:

Take a look at how we're expecting this our afternoon and evening to shape up in terms of temps and precip hour-by-hour. #3weather #OHwx #wx #3news #wkyc pic.twitter.com/CeHlNCwMdR

11:32 a.m. The snowflakes haven't even started flying yet, but ODOT said their crews are already out treating roadways across the state:

This is the view from a plow on US 42 in Richland County. As of 11:30am, we have nearly 300 crews out patrolling and treating roadways across the state. Pavement temperatures continue to drop, so be alert for icy spots and give our crews room to work. #ODOTwinter pic.twitter.com/lPxtGrXCIU

10:18 a.m. ODOT said they are prepared for the incoming winter storm with more than 250 plow drivers ready to dispatch. Crews will work around the clock in 12-hour shifts:

Over 250 plow trucks are ready to go to help you get where you are going this Christmas in NE Ohio. Help them do their job by giving them plenty of room to work! #ODOTwinter pic.twitter.com/cTONHr4FTP