Historic cold, ice and snow knocked out power and water for people all across Texas. Insurance companies and plumbers responded to crashes and frozen pipe calls. 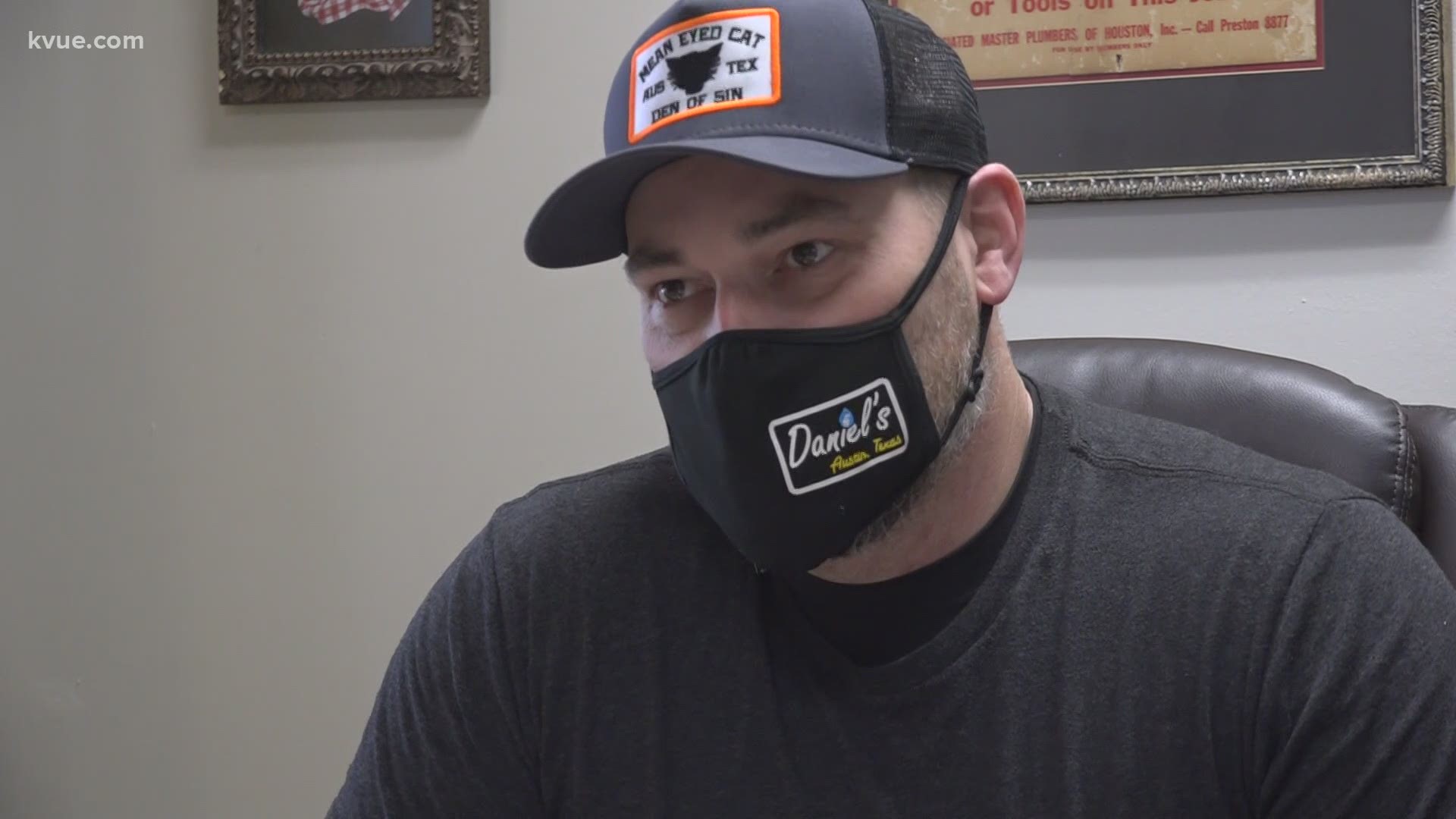 AUSTIN, Texas — As extreme temperatures ice roads and freeze pipes, plumbers and insurance companies are getting thousands of calls for help.

Typically, plumbers and water experts recommend dripping faucets inside a home to help prevent freezing. On Wednesday, the City of Austin recommended doing the opposite to help balance water supply after a loss of pressure.

"That makes sense," Daniel Lawlis, a plumber for 24 years and owner of Daniel's Plumbing, said. "I was at my house earlier. I noticed that we had pretty low water pressure. My neighbors had low water pressure. It's all through the neighborhood. Part of that, it's going to be because of water consumption. You know, it's actually low volume."

On Wednesday, Lawlis said his company scheduled out 200 calls and didn't answer or rejected 800 others. That's more than he gets in a typical month. But, he says that's nothing compared to what's coming for plumbers.

"Once it thaws out, then [people will] realize they have a leak. Instead of having 800 calls that we couldn't answer today, we'll have, you know, probably 2,400 calls," Lawlis said.

He said now, people are calling thinking they have frozen pipes when it might just be a drip from melting snow. Some are frozen, but not every one. Once it thaws, then all the frozen pipes will start showing how broken they are.

From @AustinWater now: we are requesting customers no longer drip faucets. We’re in decision-making mode to provide water to critical locations. @KVUE

RELATED: How to turn off water if pipes are frozen, burst or leaking

Along with plumbing calls, insurance companies have already started taking calls from all over the state because of the weather.

"We're experiencing customer calls coming in from El Paso to the panhandle to Dallas-Fort Worth and then on down to Houston," Chris Pilcic, from State Farm Insurance, said. "A lot of what we're hearing are about property claims related to frozen and burst pipes."

RELATED: What to do if your pipes freeze or burst

According to Pilcic, last winter State Farm's average payout for a frozen pipe claim was a little more than $10,000. Burst pipes lead to their own problems.

"It's not just to the plumbing of the home, but potentially the walls, the ceiling, the cabinets, the flooring," Pilcic said.

Before freezing pipes, the winter weather caused hundreds of crashes on the roads, leading to more insurance calls.

"For auto, homeowners, renters and commercial claims, we're anticipating hundreds of thousands of claims," Camille Garcia, from the Insurance Council of Texas, said. "That could that could vary from just small minor fender benders to homes that have significant water damage."

It depends on your insurance plan, but as long as you file a claim before it's too late to do so per your provider, it does not make a difference how many people file before you. Garcia recommends taking pictures of everything before you see damage and after any damage occurs as well as documenting any conversations and payments you make for repairs.

"You want to set expectations. You'll want to document that conversation so you'll know what happens next in the process," Garcia said. "You can take steps in order to advance the process as well. So have those conversations, document them, make sure that you know what the process looks like. And as you're doing that, you know, start now – start taking pictures and photos now. So that way what we're looking at is a before picture. And, you know, if anything should happen in the future, you have that before and after photo for you to start making plans and making decisions based on on that."

Both Garcia and Pilcic also highlighted because of the COVID-19 pandemic, insurance claims inspectors sometimes will do inspections virtually, making the claims process a little bit quicker.