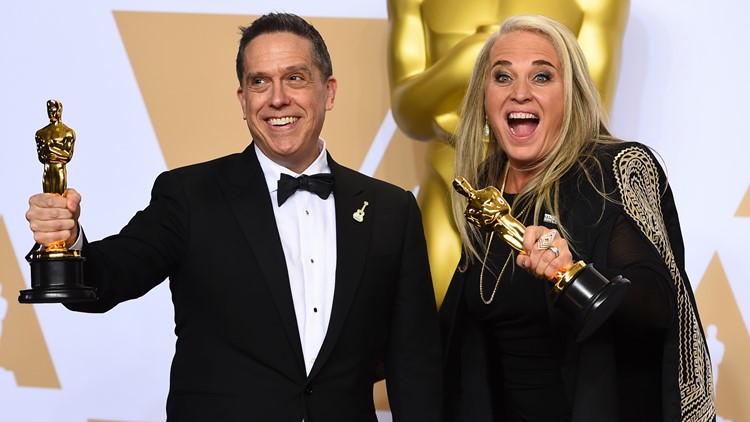 Photo by: Jordan Strauss/Invision/AP
Lee Unkrich, left, and Darla K. Anderson, winners of the award for best animated feature film for "Coco", pose in the press room at the Oscars on Sunday, March 4, 2018, at the Dolby Theatre in Los Angeles.

CHAGRIN FALLS, Ohio — Northeast Ohio Lee Unkrich appears to be going out with a bang.

Nearly a year after he retired from the film industry, Toy Story 4 (which boasts Unkrich as an executive producer) was nominated for the Academy Award for Best Animated Feature. Although executive producers do not technically receive Oscar credits, it's the ninth film Unkrich has worked on that has received at least one nomination from the Academy.

A native of Chagrin Falls, the 52-year-old Unkrich worked for Pixar for 25 years and served as a co-director for the classic films Toy Story 2, Monsters, Inc.; and Finding Nemo. He made his solo directorial debut in 2010 with Toy Story 3, and won the Best Animated Feature Oscar.

Unkrich earned his second Academy Award for Coco in 2017, but in February of last year left Pixar and the film industry altogether to spend more time with his wife and three children. He also said he would pursue "interests that have long been back-burnered."

Unkrich hosted a private screening of Toy Story 3 in his hometown the year it came out, and later returned after his triumph for Coco to express his enduring love for the region.

"It's been a long time since I've lived here, but it feels like yesterday as well," he said at the time. "I know that everyone is proud of having someone from Chagrin go off and be successful."

RELATED: The Oscars won't have a host for the second straight year